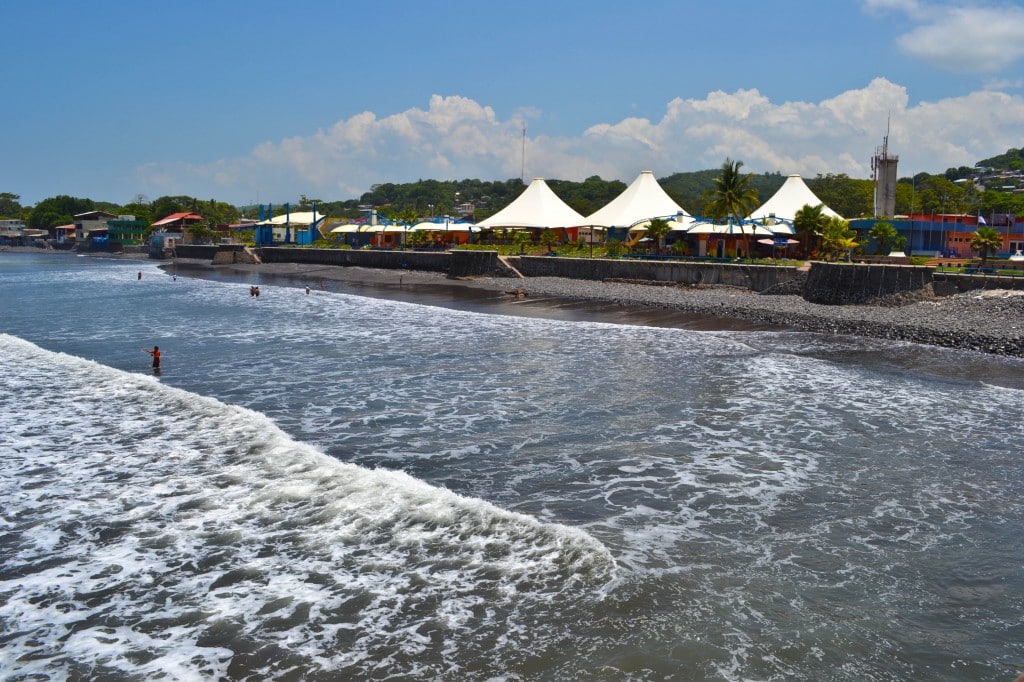 Inside: El Salvador is Central America’s smallest nation and the least visited. But this up-and-coming travel destination is well worth exploring.

After kicking things off last week in Roatan, I’m excited to move on to the next exciting stop on this Central America itinerary.

Ironically, Central America’s smallest nation is also home to its largest economy. But densely-populated El Salvador is also the least visited country in the region.

Its war-torn history is partly to blame. But the country has also been plagued by natural disasters like Hurricane Stan in 2005 which was immediately followed by the eruption of Volcán Santa Ana. Flooding from the remnants of Hurricane Ida also hit the country hard in 2009.

With two volcanic ridges spanning east to west, daily life in the country known as the “Land of Volcanoes” is anything but boring.

I land in San Salvador a little after 6:00pm after a lovely flight on Avianca airlines. To get from Roatan to Guatemala, a change of planes in San Salvador is necessary so I decided to spend one night here to try to see a little of the city.

After enduring another lengthy immigration line, I finally emerge from the arrivals hall a little after 7:00pm to a sea of humanity. There are easily a thousand people jockeying for space in the waiting area. Some holding flowers, others with signs bearing neatly printed names.

I’m immediately grateful I had the forethought to email my hotel, the Sheraton Presidente San Salvador, a few days ago and scheduled the hotel taxi to pick me up. I easily spot the sign with my name on it and we hit the road for the 45-minute ride to the hotel.

When we arrive, there is obviously some kind of major event at the hotel starting at 8:00pm because traffic is backed up to get to the valet about 40 cars deep. My driver eventually gives up on the front door and drops me off at a side door instead.

The hotel is located in a lush area just outside the city and my room turns out to be lovely.

Things to do in San Salvador

I don’t have much time in El Salvador. Less than 24 hours, in fact. So I do what has become my standard M.O. when time is short.

I throw money at the problem.

The next morning, after a decent night’s sleep, I head down to the bell desk to inquire about my options. Typically, in situations like this, it’s best to just hire a car and driver for the day.

I figure I need to be at the airport by 1:00pm for my 2:30pm flight to Guatemala City. That leaves me about 4 hours to explore San Salvador and its surroundings.

Ideally, I hope to see a little of downtown San Salvador, make a trip to the Boquerón volcano, and then visit the Pacific coast and the town of La Libertad. Unfortunately, after talking with the bell captain and the taxi driver he recommended, Giovanny, it seems I will only have time for two out of three.

Since they both suggest skipping downtown because there isn’t much to see (who am I to argue with two locals on that?), I decide to focus my efforts on the volcano and the beach.

Bags loaded in the car, Giovanny and I head for the San Salvador volcano, also known as El Boquerón.

Adjacent to El Salvador’s sprawling capital, the western edge of San Salvador actually lies on the slopes of the volcano. The drive to the top has a few good viewpoints and we stop for photos several times. After parking at the visitor’s center, we begin the hike to the top.

The hike is fairly easy and when we reach the top, the views into the cavernous crater are amazing. And the trails around the ridge are well-kept and easily navigable. It reminds me a bit of my visit to Reunion Island’s Piton de la Fournaise.

During the volcano’s most recent eruption, in 1917, the crater lake evaporated and a cinder cone appeared, nicknamed “Boquerocinto” by the local volcano people.

We walk along the ridge trail taking in the views from every angle. Then hop back in the car to make the 45-minute drive out to the coast.

The Beaches of La Libertad

El Salvador is the only Central American country without a Caribbean coastline. Instead, the country’s rugged Pacific coast is primarily known for fishing villages and great surfing.

Historically, the gritty beach town of La Libertad has been better known for drugs and crime than surfing and tourism. But El Salvador’s government has made a conscious effort in recent years to improve both the tourist infrastructure and safety.

A colorful boardwalk was added on what’s now considered the tourist-friendly side of the pier. And food carts abound on the more local side of the beach.

La Libertad’s pier is the first-ever port built in the country. But these days it serves only fishing boats. It’s also home to a (let’s just say) boldly aromatic daily fish market.

After a stroll down the boardwalk and through the fish market, Giovanny and I get back in the car and head for the airport.

It was an all-too-brief glimpse into a country that no doubt has much more to see. But I definitely maximized the few hours I had and I’m so glad I decided to spend the night instead of just connecting through. I thoroughly enjoyed my visit and I’d love to come back someday and explore more.

But for now, it’s time to move on. I’m excited to see Guatemala’s Lake Atitlan and check out one pretty exceptional Bucket List eco-resort.

How to Become a Blissful Beach Bum? Hint: Head to Ambergris Caye, Belize

Forget Cancun: Why Mexico’s Riviera Maya is the Perfect Getaway You Need Now