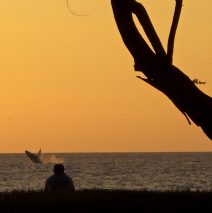 Okay, so I first have to apologize for neglecting the website for the past week. I’ve gotten a number of concerned e-mails but, not to worry, I’m just fine here in Maui.

Truth be told, I think the jetlag from Vietnam finally caught up with me this week and I’ve been spending a lot of time sleeping and just generally lounging around near the beach watching the thousands of humpback whales migrating by just offshore.

Though I have been to Hawaii a number of times, this was my first trip to Maui. On the 45-minute cab ride from the airport to Ka’anapali, I was struck by the amazing beauty of the island. From the spectacular lush green mountains to the royal blue waters surrounding it, Maui is quite a welcome sight for the weary traveler.

Maui has been named the #1 island in the world in Conde Nast Traveler magazine 13 times and with good reason. 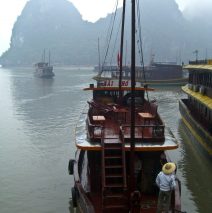 Well, if Saigon is like Shanghai then Hanoi is definitely like Beijing (and that’s probably not a compliment).

When I finally arrived at the train station it seemed almost like a different country than Saigon; dreary, depressing and cold – maybe I was just in a bad mood from the train ride.

I arrived at my hotel, the Sheraton Hanoi, a little after 10pm and the first order of business was trying to set up a tour to Halong Bay (about a 2 hour drive away) for the next morning. Obviously, this was a little difficult at 10pm but I didn’t think about making the arrangements ahead of time so I had to take whatever I could get.

There weren’t any group tours still available at this late hour (which was fine by me) but they were able to arrange for a driver and guide for me for the next morning complete with a 4-hour junk boat tour of the bay including lunch so I happily agreed to the $160 price figuring it was probably time for a splurge anyway.

And by this time, I had already decided there wasn’t much I wanted to see in the city of Hanoi. 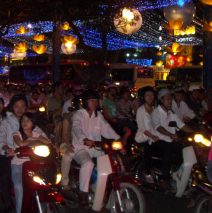 For once, I caught a break with my flights and was actually able to get an earlier connection out of Bangkok to Ho Chi Minh City (Saigon). So, instead of arriving at 8:00pm, I landed at 6:00pm, which was good since I needed to buy a train ticket to Hanoi for the next day.

When I landed at the airport in Saigon, I had to spend about 30 minutes at the visa window while they processed my pre-approved visa application. The process was actually much simpler than I feared it might be and I was on my way into town within the hour.

I have to admit, I didn’t have high expectations for Vietnam. Actually, I guess I didn’t know what to expect, but I’d set the bar pretty low.

As I got closer to the hotel in my cab I was mesmerized by the thousands of motor-scooters rushing by on all sides of the cab and by the dazzling light displays all around the city celebrating the Tet New Year (which was technically Feb 6-10 but is apparently celebrated all month).

This was certainly not what I had expected, the city was beautiful at night. It was reminding me a lot of Shanghai, all glitz and glamour, bright lights and fancy stores. I had actually planned to take it easy on my first night and start the next day early with sightseeing but now I couldn’t wait to drop my stuff at the hotel and head out into this vibrant city to start exploring. 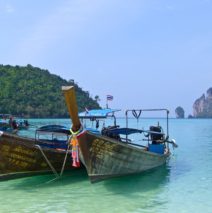 Getting from Israel to Bangkok was a bit of a challenge since (due to the lateness of booking) I couldn’t get a seat on the direct flight from Paris to Bangkok that I’ve taken the past two years.

The only way for me to get there on the date that I wanted to travel was to take an Air France flight from Paris to Moscow and then an Aeroflot flight (the Russian national carrier and recent Skyteam member) from Moscow to Bangkok. I was a bit nervous about the Aeroflot flight since there was some conflicting information online about whether I needed to obtain a Russian transit visa for my 90 minute connection.

All of the consulate information said that I didn’t need one but I’d read a few stories from other travelers who were held up by Russian immigration because they didn’t have one. The prevailing wisdom from the travel agencies was to get one just in case.

But there was no way I had time to do that as it would have involved sending off my passport for weeks so I just had to hope for the best. Further aggravating the issue, my Air France flight into Moscow was delayed and I was worried about missing the only flight out that night to Bangkok.

But luckily, when we landed, I breezed through the transit gate, and made it to my new gate just in time for boarding. What a relief.

Would you believe, this is Tel Aviv? 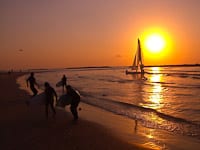 The hotel had upgraded me to a suite with a great view of the Mediterranean. Luckily, I had the benefit of seeing a few pictures and getting a little advice about Tel Aviv before I arrived thanks to my friend Bill who recently visited here. The city was not at all like my pre-conceived notions. I never pictured it as a beautiful beach city like Rio or even Honolulu but, like those cities, the beach definitely dominates city life here.

Dining in Israel is a little different than anywhere else I’ve been. Kosher rules dictate that meat and dairy should not be mixed and Israeli cuisine reflects this. Restaurants serve either meat or dairy but not both. This makes for an interesting dining experience. Even in the hotels, they will have one meat restaurant and one vegetarian (dairy). The vegetarian restaurant options are actually quite good and that’s what I went with for most of my stay. 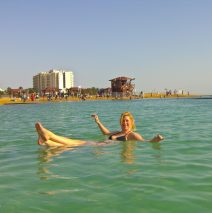 Now that I’ve reached the half-way point of the trip, I’d like to take a moment to thank all of you for the many e-mails and glowing comments about the website. I am really glad you are all enjoying it as much as I am.

So, next stop…Israel. First, a few words about the current political situation. The independent State of Israel was established in 1948 and has been the subject of political unrest with the neighboring Palestinians ever since.