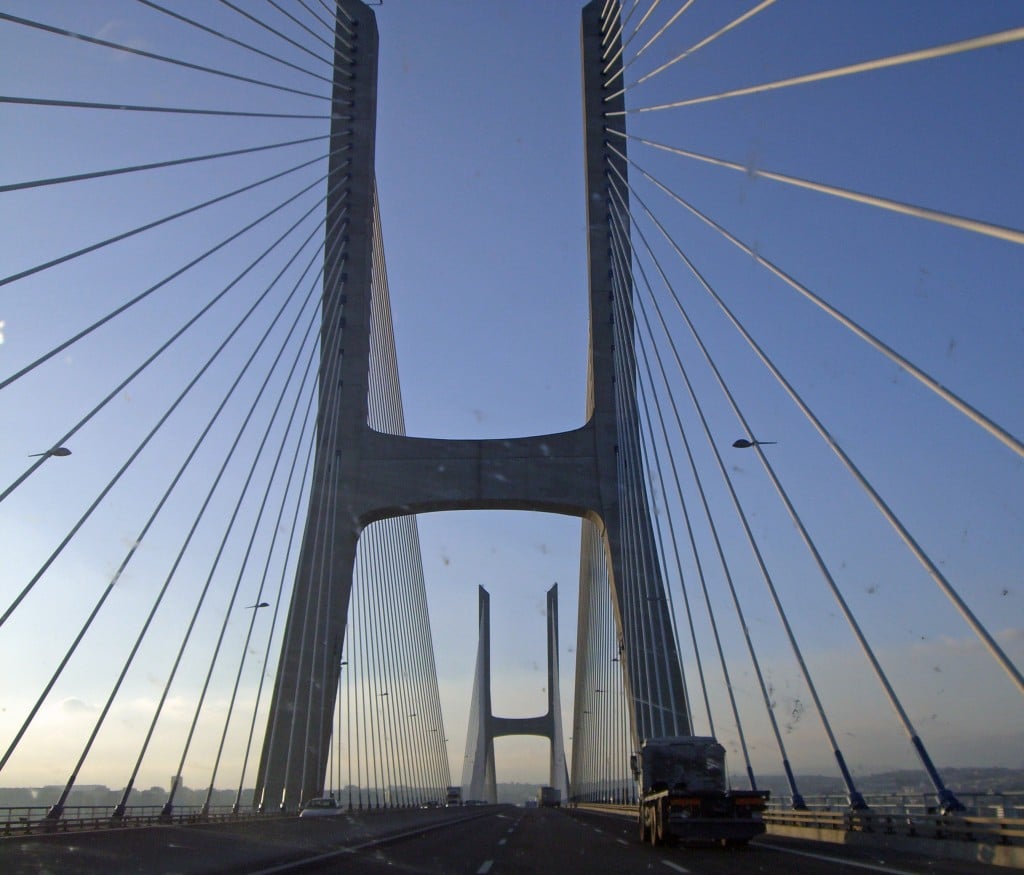 I arrived in Lisbon just before sunset and was amazed at how beautiful the city is. It actually reminds me a lot of San Francisco (with an oddly similar bridge and even cable cars).

My trip to Lisbon was actually planned around meeting a friend of mine from Ireland, Des. Des lives in Dublin and he and I used to date a while back and we’ve kept in touch since. When he heard I was planning to be in Lisbon on this trip, he scheduled a business trip (he’s been working over here some lately) to coincide with my dates.

I left all of the planning for these two days up to him since I figured I had enough planning to do and he knew the city better than I did.

Unfortunately, just as I was leaving Seville, Des called to say that he had been in a minor car accident on the way to the airport in Dublin and, though he was okay, he had missed his flight and it was the last one of the day. Darn it. He was really upset about it but insisted that the room was already paid for so I should go ahead and check in and he’d try to get a flight the next day to join me.

So, I headed to the hotel and he had indeed taken care of everything and they checked me right into the lovely suite that he had booked.

While I was bummed that Des hadn’t made it, it was definitely nice to be back in a fancy hotel suite after slumming it for the past two nights. (And it was even nicer to not be paying for it since I feel like all I’m doing lately is spending money.)

The next day, I decided to make the best of the situation and head out to see what Lisbon had to offer. My legs were finally feeling human again after the marathon so I started the day with a quick run. After a shower and a wonderful breakfast at the hotel (included in our rate, apparently) I was off to explore.

It turned out to be a good thing that I had a car because a lot of the things to see in Lisbon are a bit outside the city center.

My first stop was the Belem Tower. Built in Manueline style during the Age of Discoveries in 1520, the Tower served to defend the Tagus River bank. Once a symbol of King João II’s power, as the new centuries passed, the tower has been given different functions such as a customs control point, a telegraph station, a lighthouse and even a political prison. UNESCO classified it as a World Heritage Site in 1983.

Next to the Belem Tower is the Discoveries Monument which was built on the bank of River Tagus in 1960 to honor the 500th anniversary of the death of Prince Henry the Navigator. It was designed in the shape of a caravel, on which Henry the Navigator, Vasco da Gama, and many relevant heroes of Portuguese history are shown riding.

From there, I made my way back toward the hotel to Rossio Square, also known as Pedro IV Square. Since the Middle Ages, Rossio Square has been the setting for everything from celebrations to popular revolts and bullfights to executions. Today it’s better known as a place to shop or sit at one of the many cafes dating back to the 18th century and people watch.

I spent a marvelous day touring around town on my own since unfortunately, Des was never able to get away from the office after all. But, I really enjoyed Lisbon and my two fabulous nights here didn’t cost (me) a dime, so I’m back on budget-track.

I just wish I’d had time to explore Portugal further, especially south to the renowned Algarve region. The area is known for some of Europe’s most spectacular coastline, whitewashed fishing villages and world-class golf resorts. But I suppose that will have to wait for my next visit!

Next stop, back to Spain and the Costa del Sol.