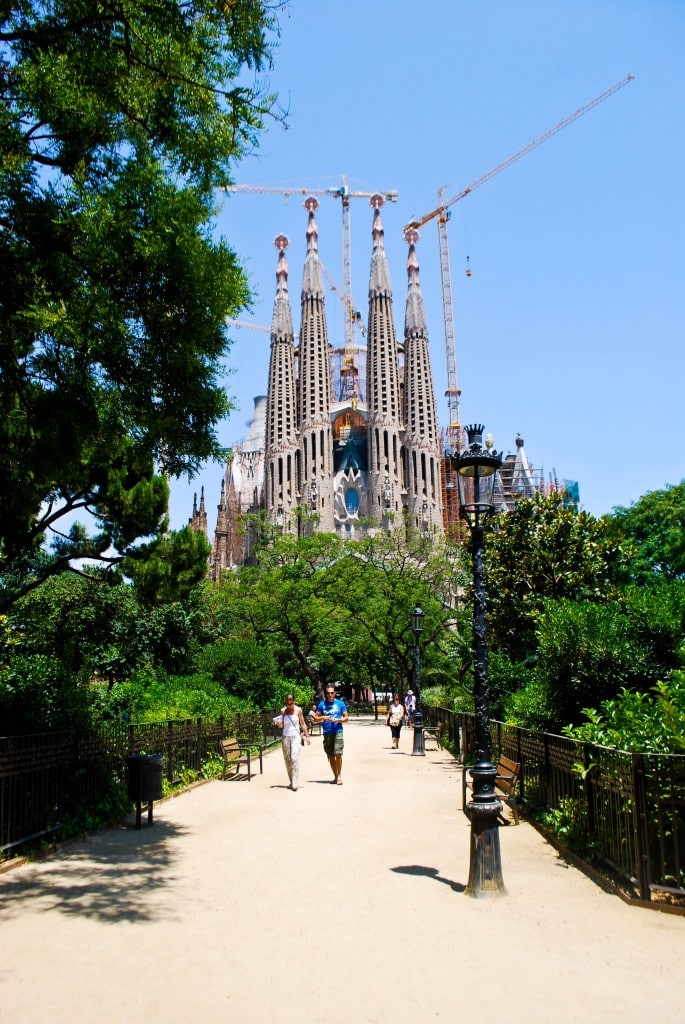 This morning I got up super early in Lisbon to get on the road and head back to Spain in search of the Rock of Gibraltar and the famous Costa del Sol.

The drive wasn’t bad and I entered the UK territory of Gibraltar (known as “The Rock”) about 4 hours after leaving Lisbon.

The very British Gibraltar is only a little over two square miles in size, but it’s been a big thorn in the side of Spain for a long time (the border was closed from 1969 to 1985). It’s been under British rule since the early 1700’s and the residents of Gibraltar have, in very large numbers, repeatedly voted to remain British.

Because of its strategic location at the point where the Atlantic Ocean and Mediterranean Sea meet, Gibraltar’s history has been volatile and it has at various times been ruled by the Spainish, the Moors and even the Dutch. The British took control for good in the early 1700’s and Gibraltar was a critical British base during World War II.

The Rock of Gibraltar

To get into Gibraltar, you have to first go through UK passport control and customs in your car (or on foot if you walk in from Spain). Then you drive (or walk) directly through the airport’s main runway to get to town (I guess space is at a premium when you’re only working with two square miles).

The town is a bit surreal in the middle of Spain as the minute you cross the border, everything is in English again (signs, radio stations, etc.). It was a nice change of pace for me since I haven’t heard much English in the past week or two.

There are red phone booths, double-decker buses, and pubs on every corner. It is almost impossible to park, which I quickly learned, and the streets are very narrow – fortunately, I had a small car. The beaches were empty since the temperature was in the low 60’s but there were still a ton of people around shopping, drinking and generally being British.

It was especially nice to hear a radio station in English again since the news reports I have been listening to on the radio for the past few days go something like this…blah, blah, blah, John Edwards…blah, blah, blah, Britney Spears…blah, blah, blah, Rudy Guiliani. I never know what they’re saying about any of those people until I get to the hotel in the evenings and turn on CNN. (In case you haven’t been keeping up, two are out of the presidential race, one is out of her mind.)

I have, by the way, become a bit compulsive about CNN on these trips since it’s the only way I keep up with what’s going on at home (and what’s going on in the countries I’m going to next). And, of course, I am totally obsessed with election coverage and found myself watching a debate in the middle of the night the other day and also waking up in the middle of the night to see who won the Florida primary.

It’s really quite inconvenient that all this happens in the middle of the night over here, ha!

So, after leaving Gibraltar (and going back through Spanish passport control and customs – honestly, this all seems a bit silly), I headed north along the coast toward the beach town of Marbella where I am spending the night tonight at the Marriott Marbella Beach Resort.

When I arrived at the resort around 3pm, I was very excited to discover that for my rate of 109 euro for the night, I had not just a little old hotel room but an entire spacious condo complete with full kitchen and washer and dryer. I am especially thrilled about the washer and dryer.

This may not be exciting to you but when you’ve been living out of a tiny carry-on suitcase for almost two weeks and you really need to wash clothes, this can easily turn into the highlight of your day.

The resort was beautiful, despite the rocky, dirty sand beach, and I had a great dinner and watched the sunset while my clothes were washing back in the room. Another bonus was that the condo also had free wireless internet – and if you think I was a little too excited about the washer and dryer, well, this really put me over the top.

Add in the jacuzzi tub in the bathroom and they may have to drag me out of here tomorrow.

After an exciting night of doing laundry in Marbella, I got up very early again to make the 7 1/2 hour drive up to Barcelona.

Once the sun finally came up, the drive was quite stunning, winding along the coast and through the mountains. I arrived in Barcelona around 1pm, returned the rental car at the airport and hopped the airport bus into town.

Having learned something from my pathetic attempt at finding my hotel in Seville without directions, I had made good use of my free internet at the hotel the night before to find directions to my hotel in Barcelona.

At 50 euro/night, the Hotel Constanza in Barcelona was another great deal I found in Spain. A hotel that came highly recommended on Trip Advisor (which I use a lot when looking for hotels in random places – such as Cuzco, Peru last year), I got such a low rate because they are in the process of renovating.

However, once I arrived at the hotel (which I easily found with the benefit of a little direction) I couldn’t tell they were doing any construction at all. If so, they were hiding it well. My room was quite small – which I expected – but it was very comfortable and had all the modern amenities including free internet.

A Stroll Down Las Ramblas

For my first day in Barcelona, I spent the afternoon taking a walk down “Las Ramblas”. This pedestrian-only street stretches for about a mile from the Placa de Catalunya all the way down to the port. Along the way, there are restaurants, cafes, stands selling flowers and animals (which was a little odd), a huge market and more street performers than you’ve ever seen in your life.

The street performer with the chihuahua was particularly hysterical. You can easily spend a whole day wandering around Las Ramblas watching the street performers, shopping, eating tapas, sipping wine, etc. So, that’s pretty much what I did for the afternoon.

A Gaudi Tour of Barcelona

The next morning, I headed out into the city to see the rest of the top Barcelona sights. The first thing to know about Barcelona is that the city’s architecture is heavily influenced by Catalan architect, Antoni Gaudi. I was not that familiar with Gaudi’s work but examples of it can be seen all over Barcelona and it is really unusual and impressive.

Gaudi died in 1926 before the completion of the church and he is buried here in the crypt. More than 120 years after construction began on the church, it is still a long way from being completed and some say it never will be.

The architects selected to carry on Gaudi’s work have had trouble following Gaudi’s “spiritual journey” but some progress has been made on what’s been called the Bible in stone.

Gaudi designed three facades representing the Nativity, the Passion and the Glory of Christ. Only the Nativity facade was completed in Gaudi’s time. Every section of the cathedral is covered in multiple carvings and embellishments. It’s completely over the top but breathtaking at the same time.

Next on my tour was La Pedrera (Casa Mila), an apartment building considered Gaudi’s greatest work. Like the church, this building also has sort of a “melting” appearance. It was built between 1905 and 1910 and it’s a wavy grey stone structure with balconies covered in seaweed-like wrought-iron.

Also like the church, it is much better seen than described. In fact, I’m discovering that Barcelona, on the whole, is a tough city to describe. It really is beautiful, though, and I hope my pictures do it justice.

I got in a few more stops on my Gaudi tour before the rain started this afternoon and I ducked into a restaurant for paella and sangria before heading back to the hotel to pack and get a little sleep before my 6:30am flight to Istanbul tomorrow morning.

I hope you’ve all enjoyed Spain and Portugal as much as I have but I am definitely ready to leave the euro behind and move on to a currency where my dollars are actually worth something.