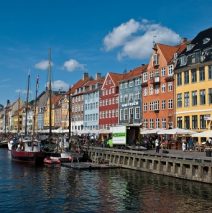 We took off from Keflavik in Iceland just after 1am and 3 hours later touched down in Copenhagen. I can’t believe the trip is coming to a close, seems like just yesterday I was cursing our delay to Munich at Hartsfield.

But alas, all good things must come to an end, so here I am in Copenhagen with two days left to enjoy my vacation before returning to the real world.

According to a global survey, Denmark is considered the happiest nation on earth. What a perfect place to wrap up my European tour. Copenhagen is Scandinavia’s largest, most cosmopolitan capital and also home to the oldest monarchy in the world. The Danish economy is very green-focused and 20% of the country’s electricity is provided by the wind turbines that dot the landscape.

With the time change, it was just before 7am by the time I made it to my hotel, the Cabinn City Hotel. Like the Thon hotels chain in Norway, Cabinn operates several budget hotels in Copenhagen and from what I’d heard the “City” property was the best. Cabinn’s motto is “Sleep Cheap in Luxury” and I hoped that would be the case.

Seems I’m getting quite a tour of budget hotels in Scandinavia. The combination of limited Starwood and Hilton properties and exorbitant rates of anything of their caliber has forced me into an accommodations arena that is somewhat foreign to me…but I must say, I‘m getting a pretty good education on the subject. And I’m discovering that most of them are not bad at all, certainly adequate for a night here and there, though I wouldn’t want to spend a month in one. 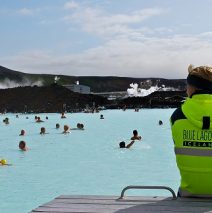 As if the approach to Keflavik Airport over royal blue waters dotted with brightly- colored fishing boats wasn’t enough to win me over, my Iceland Air flight touched down Saturday afternoon from Norway next to a gigantic rainbow arched across the terminal building. Welcome to Iceland. This could be love.

Iceland is located between two continents where the Eurasian and American tectonic plates meet making it a volcanic and geothermal wonderland. From grinding glaciers to gushing geysers, Iceland’s got it all.

The ride into Reykjavik from the airport is a long one, almost an hour. But the airport shuttle dropped me off directly at my hotel for the first night, the 22 Hill Hotel, which was a nice touch. I had originally planned to spend both nights in Iceland at the Hilton Reykjavik but the rate they wanted for Saturday night (compared to my reasonable Sunday night rate) was outrageous…enter “Plan B.” I found the 22 Hill Hotel again using the combo Booking.com/Trip Advisor method. 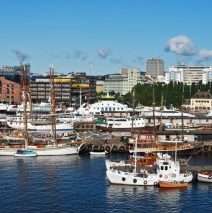 Had I spent a little more time researching Norway, I might have uncovered the useful fact that it is universally acknowledged as the world’s most expensive country. Not exactly what you need when you’ve already been on the road for 3 weeks and feel like you’ve been doing nothing but spending money.

It’s the kind of place where, like Tahiti earlier this year, a sandwich on any restaurant menu will run you $25 bucks. And God help you if you want to try a real restaurant. At this point in my journey, Norway is not in the budget.

Getting to Oslo was the easy part. I had booked my 6-hour train ride from Stockholm before leaving the States. Since it was such a long ride, I went with first class (which didn’t cost much more than coach and was well worth it). The ride was very scenic and I was able to get a ton of work done – both on the website and on my upcoming football games at Cal and Tulane (the reality of another football season is looming!). 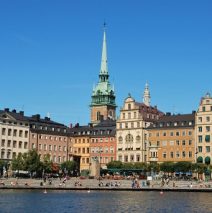 My transportation choice from Tallinn to Stockholm was a cruise ship across the Baltic Sea.

It was described as a “ferry” so I wasn’t sure what to expect from the ocean-view cabin I had booked. At $235 for the cabin, it was a little bit of a splurge but since the trip was 17 hours long, comfort won out over frugality. The check-in and boarding process were extremely easy, it took me less than a minute to check in at the window in the terminal and receive my cabin key.

I’ve only been on a cruise ship once before and it was a long time ago (senior cruise after high school) so I really had no idea what the cabins would look like. I was pleasantly surprised when I got to my cabin. It was clean, comfortable and nicely-decorated. The bathroom was, of course, small but definitely sufficient.

All in all, far more comfortable than the overnight train car Shannon and I had been on a few days before. And there was even a TV with English channels other than CNN, a nice change of pace. 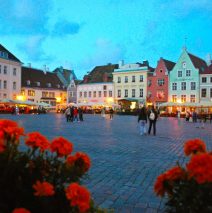 My 90 minute high-speed (hydrofoil) ferry ride from Helsinki across the Gulf of Finland was smooth and very pleasant. As we neared the coastline of Estonia, I could easily make out the cathedral spires of Old Town. 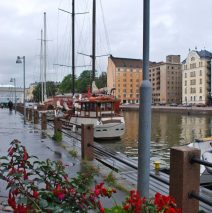 However, when the SkyTeam Europe pass idea self-destructed pre-departure (long story), re-booking the direct flight I wanted would have been more than $600. So, obviously I needed a new plan. Enter Air Berlin.

My new favorite discounter, Air Berlin, had cheap flights to Helsinki from Germany at about $110. However, I was in Prague. The nearest German city to Prague is Dresden, a 2 hour train ride away. From Dresden, I had to fly into Dusseldorf and then finally a connecting flight to Helsinki. I lost most of my first day in Helsinki as the new flight didn’t land until 11pm, but it saved me more than $450. Definitely worth it.