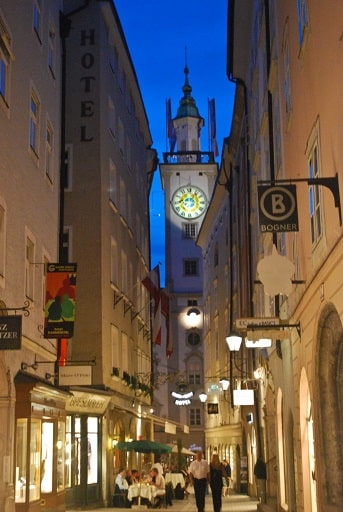 After saying goodbye to Dena at the airport in Zurich early this morning, Shannon and I boarded our flight for Vienna. The plan was to rent a car at the airport and drive to Salzburg Austria for Saturday night before returning to Vienna to spend Sunday night. Unfortunately, sometimes things don’t work out quite like you planned.

When we landed in Vienna around 10am, every rental car place was sold out and the airport was a madhouse. So, we went to Plan B – take the airport train into Vienna and try to find an available rental car there. (Plan C was just take the darn train to Salzburg.)

We had hoped to rent a car because between the two of us, round trip train tickets would be about $200 and we knew we could split the cost of a car for half that. We never thought availability would be such an issue, who knew?

By the time we got the train into town and took the metro to the main train station, it was almost noon. There were two rental car counters in the train station but they were both closed for the weekend. Out of options, we went to Plan C and bought train tickets.

The train was packed but comfortable and the views along the way were lovely. We finally pulled into Salzburg station at 4pm. So much for most of our day! But, after checking into our hotel – the beautiful Sheraton Grand Salzburg – we made the best of the remaining daylight by getting out and around town.

We had hoped to do the famous “Sound of Music” Tour but the afternoon tour goes at 2pm and we missed it. The 9am next day tour would have kept us in Salzburg too late to make our return train to Vienna, so we had to miss out on that Salzburg classic. Instead, we took a walk right out the back door of the Sheraton and into the beautiful Schloss Mirabell Gardens.

A short stroll later, we were wandering through charming Old Town Salzburg (a Unesco World Heritage site) toward the castle fortress Festung Hohensalzburg. We took the funicular to the top for an awe-inspiring view of the town and river below.

The restaurant was built right into the side of the cliff and most of the dining room was in a cave. The food and atmosphere were both outstanding and it was a terrific way to spend an evening in Salzburg.

After a full day of traveling, we decided to head back to the hotel after dinner and get some sleep.

The weather was fairly overcast most of the day in Salzburg so we were hoping to be able to get out early the next morning and get some better pictures.

No luck, though, as the weather was even worse the next morning.

So, admitting defeat, we hopped the late morning train to Vienna.