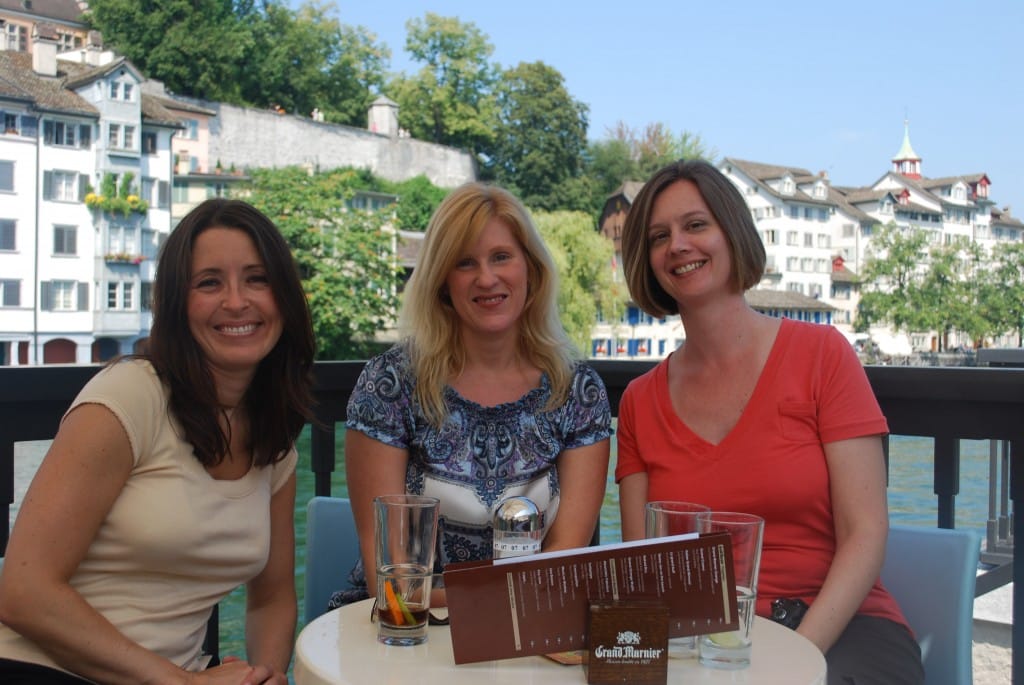 Upon leaving Mykonos Thursday evening, we had an Easy Jet flight to Berlin for an overnight (i.e. 6 hour) layover until our Friday morning flight to Zurich. Instead of sleeping in the airport this time, we opted for a reasonably-priced hotel near the airport. It was definitely a good call if for no other reason than being able to start our morning with showers and fresh clothes.

The Zurich plan was to meet up with my friend and travel buddy for Week #2, Shannon, at the airport. Dena and I were scheduled to land at 7:40am; Shannon was coming in on a Delta flight from Atlanta landing 10 minutes later. Since none of us had ever been to the Zurich airport before, we had no idea whether it would be difficult to find each other.

It turned out to be super easy. Our flights both landed a little early and we easily found Shannon at baggage claim…hooray!

We hopped onto Zurich’s excellent train system and after a little initial confusion, easily found our hotel, the modern and conveniently-located Four Points by Sheraton Sihlcity.

It was a gorgeous day in Zurich Switzerland, probably about 80 and not a cloud in the sky. After settling into the hotel, we were back out to explore the city by mid-morning.

A Walking Tour of Zurich Switzerland

First up, a stroll along Zurich’s famous Bahnhofstrasse lined with shops and cafes.

Next, we spent a little quality time with the swans of Lake Zurich followed by lunch at a café along the Limmat River. After lunch we hiked the steep streets of Old Town to a park overlooking all of Zurich. The hike up the hill was, of course, followed by dessert at the city’s famous Sprungli Confiserie.

By late afternoon, feeling like we had seen it all, we decided a power-nap back at the hotel was in order. After all, Shannon had been up all night on a plane and Dena and I had managed only an hour or two of sleep in Berlin – we were all fading fast.

After a 2-hour nap, we were ready to head back out for dinner in Old Town. We were looking for something uniquely Swiss for dinner but none of us could come up with exactly what that was – our best guess was cheese or chocolate, can you make dinner out of that?

Turns out you can, cheese at least.

We happened upon a quaint fondue restaurant in Old Town and decided that was close enough. It was a great meal and afterward we wandered into a trendy bar along the river for one more drink before deciding we were all beat and heading back to the hotel.

Sadly, this was Dena’s last night as she has to fly home tomorrow and return to “real life.” (Before she goes, however, she did share a few thoughts on what it’s like to travel with me.) Shannon and I will be moving on to Austria.

We will miss you, Dena!!  Thanks for coming along for Week 1!