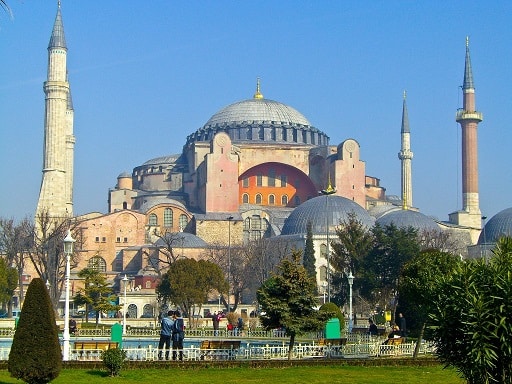 To say that Istanbul Turkey is a city rich in history is a bit of an understatement.

Formerly Constantinople, and cradle to the Ottoman Empire, it was founded 667 years before Christ and is the only city in the world built on two continents.

How to get from the Istanbul airport to downtown

I always try to do the research on the most economical way to get from the airport to my hotel. When traveling around the world in a month, those taxi trips can eat up a substantial portion of my budget.

If there’s a reasonable way to get into town without taking a cab, i.e. train or shuttle bus then that’s usually what I do.

In this case, my research told me that there was an airport bus that went to Taksim Square which looked to be a close walk to my hotel.

When I arrived at the Hilton, they had upgraded me to the Executive Level which is always a nice thing since it tends to include breakfast in the mornings and cocktails/appetizers in the evenings – again, a good money-saving strategy.

Things to do in Istanbul

On the flight over from Barcelona, I read through my tiny Istanbul guide book cover to cover to figure out what I wanted to do for the two days I would be here. One of the things the book said was a “must do” was a visit to a Turkish Bath.

Public baths were originally founded by the Romans, who passed the tradition on to the Byzantines and from them to the Turks. In the early days, the baths were a public utility because of water shortages and provided a perfect answer to the Koran’s demand for cleanliness.

Though most Turkish homes do have adequate plumbing today, the baths remain a social institution and there are more than 100 to choose from in Istanbul. The description in the book made it sound lovely… “a bout of steaming, soaking, scrubbing and massaging in an ancient Turkish Bath”.

Well, after all the walking (not to mention running) I’d been doing, the flights, the drives, the train rides, the cold I have been fighting the last few days…a few hours at a Turkish Bath sounded like just what the doctor ordered. And not very expensive either at about $40 for the whole service, including a massage.

I consulted with the concierge at the hotel to see what my options were (the guide book had recommended a specific place but I wanted to get the hotel’s opinion, too), she told me that the hotel had its own Turkish Bath but it was only open to women until 3pm. No good since it was now almost 5pm and I really wanted to knock this out today and have all day tomorrow for sight-seeing.

So, I told her that I would prefer to go tonight and she called the place that they refer their guests, the Cagaloglu Hamam (hamam is Turkish for bath), to make an appointment for me at 6pm.

I was a little nervous about what to expect since the hotel told me this was the hamam that a lot of the local people go to as well. But I was excited at the prospect of a massage and a little relaxation time in a steam room in the hopes that it would help my cold. So I hopped in a taxi for the 15 minute ride over.

The Cagaloglu Hamam was a gift to the city in 1741 from Sultan Mehmet I and it has been visited over the years by the likes of King Edward VIII, Florence Nightingale and Tony Curtis, to name a few.

When I walked in the front door, I was immediately greeted by the sight of a number of men walking around in short sarongs…very short sarongs. I first thought maybe I had wandered in the men’s door by mistake but I was then quickly greeted by an attendant who welcomed me and ushered me down the hall into the women’s dressing room.

Apparently, in the hamam, the men can just sit around wherever they want (though not in the women’s side), while the women are kept to their own quarters. I was given a sarong, some slippers and a key to a tiny little dressing room that would be mine for my stay. (Sidebar: the Cagaloglu Hamam is apparently listed in the book, 1,000 Places to see Before you Die because they were promoting this book everywhere. Flyers, banners, etc. It was a little ridiculous.)

When I came out, I was shown into the “hot room” to decompress for a while and wait for the attendant who would be doing my scrub and massage. The hot room was beautiful, a domed ceiling supported by arches that rise from marble columns. The entire floor is marble (and more than a little slippery with the steam) and there are taps on the walls running warm or cold water that you can use to cool off. It was actually very opulent and I was really beginning to relax.

After about 30 minutes, my attendant (a large Turkish woman in a swimsuit) came in to get me for my massage and salt scrub. They definitely know what they’re doing in the hamam as it was one of the better massages I’ve ever had, albeit a little brusque.

They do kind of order you around a lot…walk over here, turn over, sit up, etc. I did what I was told and tried to relax. After the massage and salt scrub, the attendant tells you to sit up on the marble step and then proceeds to wash your hair.

Now, I have to say, this was a bit odd. It’s kind of like when you were a little kid and your mom would wash your hair while you sat in the tub…except your mom is a 300lb Turkish woman who keeps barking, “turn!” Interesting, to say the least.

When I got back to my dressing room, there was a “gift pack” for me consisting of a comb, a logo-emblazoned wet wipe and a pair of cotton panties. Umm, OK. The whole evening was quite an experience but I have to admit, my skin has never felt softer and I slept like a baby that night.

The next morning I woke up early, enjoyed a wonderful breakfast in the Executive Lounge and headed out to see the sights of Istanbul. It was a very cool, hazy morning and I was hoping the sun would cooperate so I could get some good pictures.

My first stop was Istanbul’s most recognizable landmark, the Blue Mosque. The mosque was built opposite Haghia Sophia (originally a Christian church) to underline the supremacy of Islam over Christian Byzantium. The Blue Mosque gets its name from the blue Iznik tiles that dominate the interior.

Unfortunately, I arrived during one of the 5 daily prayer times during which the mosque is closed to tourists, so I had to kill some time walking around and visiting Haghia Sofia across the street before I could go in.

It’s quite a surreal experience to be walking around a Muslim city when the call to prayer blares out from the loudspeakers attached to the minarets of every mosque in town. The melodic chanting prayer call rings out from one mosque, then the next, then the next and it’s almost like the mosques are talking to each other. It’s actually a little eerie.

And it’s a “cover your ears” kind of loud. If you leave your windows open at the hotel, you can hear the first call to prayer at 5am from the nearby mosque.

One of the greatest icons on the Christian church, Haghia Sophia is an architectural wonder that has survived fire, war and earthquakes and outlived two great empires. It has stood for over 1,500 years as a miraculous feat of design and engineering.

After wandering around the grounds for a bit, it was time to head back to the Blue Mosque and take off my shoes for a peek inside. It was quite beautiful inside but I think that the interior of the mosque I visited in Cairo was even more impressive.

As a Catholic (and an American), it is sometimes hard for me to think of a mosque as beautiful when I consider what the religion can breed in its extremes. But when I visit a mosque I always try to appreciate it for the amazing structure that it is and what it means to the people who worship there.

Turkey is unique as a Muslim country because it maintains a mostly Western-style government and its mosques, churches and synagogues have stood side by side for centuries in peace. This is no easy feat in today’s Middle East and I like to think it offers hope that anything is possible in the region.

After leaving the Blue Mosque, I wandered over to the Grand Bazaar. Originally designed as the trading heart of an empire the Grand Bazaar is a shopper’s delight for carpets, spices, souvenirs, leather goods, you name it.

Unlike the souks of Egypt or Morocco,  I hit the bazaar on my own this time figuring I’d take my chances on the harassment factor.

It wasn’t too bad, though I didn’t really buy anything. On the past two trips I’ve bought something in pretty much every country. I don’t think I’ve bought anything so far on this one, except my shoes in Marrakech. The problem is that my luggage is too full and I can’t think of where I’d put any new purchases.

I think I’m going to ship some stuff home after Israel since I’ll be moving on to warmer climates after that. So maybe when I free up some space in the luggage I’ll get some shopping inspiration.

After the bazaar, I wandered around town a little more and ended up down by the Bosphorous waterway which links the Black Sea to the Sea of Marmara, dividing Europe from Asia (Istanbul sits on both sides of the Bosphorous, hence the “city on two continents” title). There are a number of ferries that run along the Bosphorous linking central Istanbul with outlying towns.

It’s a great view from the bridge to watch all of the fishermen lining the railing and the ferries going by below. I hung out to enjoy the view for a little while before heading back to my hotel to get some sleep. Tomorrow, a 6am flight to Milan and a connection to Tel Aviv.