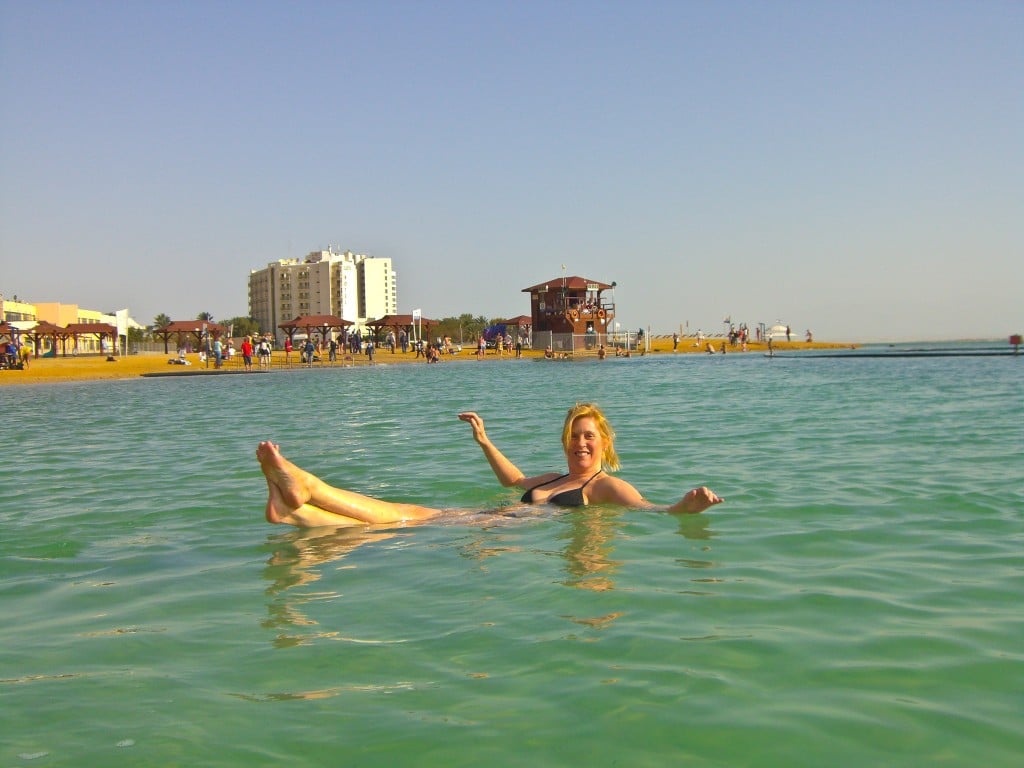 Now that I’ve reached the half-way point of my 3rd annual 30-day round the world trip, I’d like to take a moment to thank all of you for the many e-mails and glowing comments about the website.

I am really glad you are all enjoying it as much as I am.

First, a few words about the current political situation. The independent State of Israel was established in 1948 and has been the subject of political unrest with the neighboring Palestinians ever since.

There have been several wars over the years and, more recently, regular occurrences of suicide bombings. Luckily, the past year has been quiet on the terrorism front and I hoped that would continue through my visit. Unfortunately, on Monday of this week, the first suicide bombing in over a year took place in Dimona, Israel – a town in the south between Tel Aviv and the Dead Sea. Responsibility for the attack was claimed by the military wing of the Palestinian faction Hamas.

I don’t know how much coverage it got in the States, but I heard a lot about it on CNN International while in Turkey. I checked to see if any new travel warnings or restrictions had been issued but, since none had, and Dimona wasn’t on my itinerary, I decided to continue my trip as planned.

I flew from Istanbul to Tel Aviv on Alitalia (which continues to underwhelm) with a connection again in Milan. We were delayed about an hour on the tarmac in Milan due to a security issue in the baggage hold. Eventually, we made it out of Milan for the uneventful 3 hour flight to Tel Aviv.

Arrival in Israel was much easier than I expected, I’d been told that tourists with a number of Arab stamps in their passport (which I have) could be subject to questioning at passport control. But after only a few quick questions as to the reason for my visit to Israel, my passport was stamped and I headed out of the airport to find the rental car counters.

I planned to spend the first night of my stay at a resort in Ein Bokek on the Dead Sea Israel, about a two hour drive from Tel Aviv, so I had rented a car for the first day only to make the drive there and back. Then I would spend the remainder of my stay in Tel Aviv.

Thanks to the delay in Milan and an excessive amount of time to get my car, the sun was setting as I drove away from the airport. I had hoped to make it to the hotel before it got dark but apparently I would have to wait until tomorrow to get my first glimpse of the Dead Sea.

With map in hand, I easily navigated my way to Ein Bokek (I’m telling you, I would be GREAT on The Amazing Race) though once I got off the main highways and was driving through the mountainous Judean Desert, it was seriously dark…no lights around for miles. It was a little eerie, but I finally made it to the hotel, the David Dead Sea Resort & Spa, around 7pm.

Aside from a dip in the Dead Sea, the main attraction in this area is Masada, site of a mass suicide by the Zealots in AD73 to avoid capture by the Romans and today a symbol of national pride. Diligent research revealed that the best time to see Masada was an early morning climb to the summit to watch the sunrise.

I checked with the concierge at the hotel who told me that the visitor gate opened at 4:30am but that I should plan to arrive about 5:30am in order to complete the 1-hr climb to the top before sunrise. Since that meant getting up at 4:30am to make the 30-minute drive and it was almost 8pm and I couldn’t see anything outside my window anyway, it was time for bed.

The next morning (or I guess I should say, the middle of the night), I got my hiking shoes on and headed out.

Luckily, my rental car had an unlock button on the keychain (my last rental didn’t) or I never would have found my car in the pitch-dark parking lot. What do they have against street lights in this town, anyway?

When I arrived at Masada at 5:30am, it was so dark I couldn’t see anything but the little shack to buy the ticket to the hiking trail. (There is also a cable car to the top but it doesn’t start running until 8am.) I don’t know where the moon was but it wasn’t offering any assistance with the light situation.

Since I couldn’t see the mountain at all, much less the top of it, I had no idea how high it was or where the trail even began. Thank goodness there were a couple of Dutch tourists who had gotten there just ahead of me and one of them had a flashlight so I stuck with them for most of the climb up the “Snake Path” trail.

Honestly, I don’t know how they expect anyone to do this climb in the dark, but I guess people do (people smart enough to bring flashlights, that is). It turned out to be not too bad of a climb (not as bad as Table Mountain in Cape Town) but it definitely would have been easier with a little light.

Fortunately, about 30 minutes into our ascent, the sky brightened enough to at least be able to see where we were stepping (which is important on a trail called the “Snake Path”). We made it to the top in about 45 minutes and were rewarded with a spectacular sunrise. The Judean Desert spread out below and the Dead Sea sparkling turquoise in the distance.

After exploring the ruins at the top for about an hour, I started the climb back down which was much easier going now that the sun was up. Though there were a number of people at the top, I seemed to be the only person on the trail going back down.

Not a big deal really until I was about halfway down and I noticed a large group of men dressed in black heading up the mountain toward me on the trail. I thought it was a little odd and wondered what kind of group they were but I became a bit alarmed when they got close enough for me to make out the assault rifles strapped to their backs. Uh-oh. What’s this?

As they got closer, they looked even more intimidating marching up the mountain and I could see that they were wearing army green uniforms, not black, and they definitely appeared to be a military unit.

This was uncharted territory for me so I wasn’t sure what to do but I just kept going toward them (it’s not like there were any other options, we were on the side of a mountain and I certainly wasn’t going back up).

When I passed them on the trail, they turned out to be very young group of Israeli soldiers (barely 18 probably) and they seemed very happy to see me, several of them smiling broadly and saying “good morning” in English as I passed.

They were all very nice so I finally exhaled and when I got to the bottom, I asked the guy at the ticket shack who they were. He said they were an Israeli army unit doing climbing exercises and they climbed Masada about once a week.

He repeatedly assured me that this was just routine and there was nothing to worry about but by this point I was much more curious than worried. I’d say it certainly got the blood pumping that early in the morning!

After my morning hike, I headed back to the hotel to change into my swimsuit for the obligatory “float” in the Dead Sea. Now this I was looking forward to.

A float in the Dead Sea is just one of those Bucket List items I have to experience. It also makes the list as one of my top 30 most extraordinary travel experiences around the world.

The Dead Sea is the lowest point on earth at about 1300ft BELOW sea level. The Dead Sea is actually composed of two shimmering blue lakes, linked by a canal, and fed by the River Jordan. The reason you float in the Dead Sea is because of its concentration of solid substances.

The hotel’s beach was deserted so I decided to drive down the street a little to the main public beach area where there were a number of people just like me, looking to get their “Dead Sea Float” photo op.

Now, there are a couple of important rules for swimming (or floating) in the Dead Sea. First, it is dangerous to swallow any of the water or get it in your eyes, so you do have to be a little careful.

Next, there is a strict “no-splashing” rule. And finally, due to the high mineral content, you can’t stay in the water too long or it will irritate your skin.

When you do get out, you have to shower off right away. Fortunately, there are plenty of showers located on the beach for this purpose.

Undaunted by the chilly water, I found a volunteer to take some photos and waded in. When I got about chest deep, I lifted my feet off the sea floor and promptly floated to the top of the water like a cork.

It was a really odd sensation and I quickly discovered it was almost impossible to keep any body part under the water. I floated for a minute or two, perfecting my Dead Sea Float technique, and then got out to retrieve my camera.

After putting the camera away I went back in one more time to enjoy the experience a little more, but after a few minutes the salt was indeed starting to bother my skin so I got out, showered off and headed back to the hotel for a real shower with soap.

Of course, I have the requisite corny pictures that I’m sure you will all enjoy. And just for the record, my travel buddy Jerome the Gnome does not float. I checked twice to be sure.

With my climb of Masada and dip in the Dead Sea behind me, it was time to make the drive back to Tel Aviv and return the car before heading to my hotel on the beach.