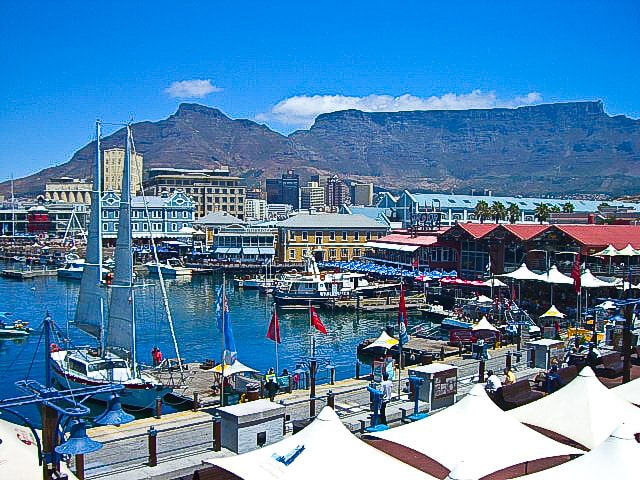 Inside: How to make the most of 3 days in Cape Town including a hike up Table Mountain and a visit to Robben Island.

We’re now a week into my 30-day trip around the world and today brings me to Stop #3 on the itinerary – Cape Town, South Africa.

I should probably begin by admitting that I have had a permanent smile on my face since I got my first view of Table Mountain on approach to landing in Cape Town today.

So, since I have clearly lost all sense of objectivity, I can only say that Cape Town is simply fabulous.

I landed a little after 3:00pm after connecting through Johannesburg on South African Airways. When we land in Cape Town, I can see that the top of Table Mountain is crystal clear – not a cloud in the sky.

This is certainly a welcome relief after the jarring cold of Berlin. But it’s also especially notable because, according to everything I’ve read, this is unusual.

Normally, there is a persistent blanket of clouds that touches just the top of the mountain, known locally as the “tablecloth.”

When the tablecloth is present, the top of the mountain is closed and you can’t hike or take the cable car up.

My plan for Cape Town definitely includes hiking up Table Mountain. However, I was planning to do it tomorrow morning after a good night’s sleep. But thanks to all my research for this city I know that if the mountain is clear now, I better hike now.

Where to stay in Cape Town

After a painless taxi ride from the airport, I arrive at my hotel, the lovely Westin Cape Town.

It’s now almost 4:00pm so I ask the concierge if I still have time to do the Table Mountain hike before sundown? She says sunset is at 8:00pm and yes, I still have time if I hurry. The hike takes about 3 hours.

She called the Table Mountain office just to confirm that the conditions are still clear and expected to stay that way. She explained that often the winds pick up when the clouds come in and people actually have to be rescued off the trail.

I do NOT want to be one of those people.

Conditions can change on a dime up there, but I get lucky, the weather stays clear throughout my ascent.

I drop my bags in my room and hop in a cab headed for the entrance of the hiking trail the concierge has recommended.

Platteklip Gorge is the easiest and most direct route so, of course, that’s my choice. The concierge also adds that it is the only trail that does not require real rock-climbing gear. This concerns me a little but I say nothing – I have run marathons, I can hike a simple mountain…right?.

I start out with enthusiasm but it begins to wane after about an hour. The hike is literally straight up Table Mountain, there are no level areas to catch your breath.

After the first hour, I begin to stop every so often to “take in the view“. I am suddenly very glad I thought to bring a bottle of water. I press on and am actually mildly enjoying the hike for the next hour or so.

At the 2 hour mark, I am approaching the summit of Table Mountain and the trail gets even more treacherous. There are points where a brief loss of balance could send you hurtling off the side of the mountain.

Do the guide books really recommend this?

I often have to critically assess the trail to determine the best method of climbing up to diminish the odds of falling off the darn mountain.

At this point, mountainside rescue is starting to sound more appealing.

The only thing keeping me going is the fact that it would take much longer to try to go back down Table Mountain than to continue climbing up. I pass several hikers on their way down from the top and they assure me it’s not much further now. Bless them.

I don’t even care if they are lying, I need the encouragement.

Sunset at the top of Table Mountain

Finally, after almost 3 hours, I reach the top.

Even with the occasional stops, I still complete the hike in about 45 minutes less than the concierge said it would take (this gives me a small amount of pride).

At the top the view is amazing. But the temperature has dropped drastically and the wind is brutal. Now that I am no longer keeping warm by hiking up a mountain, I wish I had thought to bring a jacket.

I decide to tough it out, the sunset is only 45 minutes away and I worked hard to get here.

The top of the mountain is flat there are numerous viewing points on all sides so I wander around and check them all out. Each view is better than the last. It really is beautiful up here.

I am reminded of Corcovado Mountain in Rio de Janeiro (where the Christ the Redeemer statue sits overlooking the city). The view is very much like that, with the ocean and the city below.

Of course, I didn’t hike up that mountain so I appreciate this view much more.

There is a party happening at the peak for sunset. There are a ton of people and they have picnic baskets and champagne, the mood is festive. I suddenly realize a picnic basket would have been a good idea to bring, too.

Or at least a bottle of wine.

The next time I come here (and there will be a next time) I will plan better. And take the cable car.

Next Time: Back to Africa – Cape Town Part Deux

Today was a perfect day that ended with a spectacular sunset. And despite the rigorous climb, it’s still one of my 30 favorite travel experiences around the world.

Dinner at the Victoria & Alfred Waterfront

Once the sun sets, I take the first cable car back down and head back to the hotel to shower for dinner. I walk over to the Victoria & Alfred Waterfront area for what turns out to be a fabulous dinner.

Once back at the hotel, I fall into bed for some well-earned rest.

Tomorrow, I have scheduled a tour of Robben Island off the coast of Cape Town. The island houses the prison where Nelson Mandela was held captive for 18 years. I am told it is the most poignant part of any visit to Cape Town and I am looking forward to seeing it.

Day 2 in Cape Town – A Tour of Robben Island

Since my Robben Island tour isn’t until 4pm, I sleep in a little and then return to the Victoria & Alfred Waterfront area for some lunch and shopping.

It is another beautiful day but the “tablecloth” is firmly entrenched over Table Mountain and I am glad I tackled the hike yesterday.

The waterfront area is lively with lots of street performers and tons of people wandering around. I enjoy a relaxing lunch, buy a few souvenirs (my ability to shop is severely limited due to suitcase size), and then walk over to the Robben Island Museum to catch the ferry to the island.

The history of Robben Island

For nearly 400 years colonial and apartheid rulers banished those they regarded as political troublemakers, social outcasts and the unwanted of society to this small, rocky island in Table Bay known as Robben Island.

In its history, the island has housed slaves, leprosy sufferers, the mentally ill, prisoners of war, and most recently, political opponents of the apartheid regime in South Africa and Namibia.

During the apartheid years, Robben Island became internationally known for its institutional brutality. Some freedom fighters spent more than a quarter of a century in prison for their beliefs. And Nelson Mandela famously spent 18 years imprisoned there.

After the defeat of apartheid, the last political prisoners were released from the island in 1991. In 1996 Robben Island was declared a National Monument and Museum and in 1997 it opened to the public.

Two years later Robben Island was declared a World Heritage Site. Today it is the most visited monument in South Africa.

As our ferry boat approaches the island, you immediately get a sense of the remoteness from the energy that is Cape Town. Though it’s only a 30 minute boat ride away, it seems as though you’ve left the country entirely.

A ride around Robben Island

The first part of our tour consists of a guided bus ride around the island. We see the lime quarry where the prisoners labored, the 19th-century lighthouse, the island church, and WW II fortifications among other things.

A vast amount of wildlife flourishes on the island from ostriches to antelopes to African penguins.

A tour of the prison wing

The second part of the tour is a walking tour through the high-security wing of the prison conducted by a former political prisoner there.

Our tour guide is Glenn (his English name). Glenn spent 6 years on Robben Island for treason, 8 cells down from Nelson Mandela.

As he walks us through the facility his descriptions of each area give an emotionally vivid picture of what life was like here. It is obvious his years on this island still haunt him but his choice to lead tours there seems oddly therapeutic.

Having former political prisoners leading the tours is fascinating and allows the visitor a much truer sense of the place. Toward the end of the tour, Glenn walks us past Nelson Mandela’s cell and then leads us down the hall to his own.

The tour concludes in the courtyard and then we board the ferry for the ride back to Cape Town.

It’s hard to imagine what this beautiful place was like only 20 years ago during apartheid. I conclude the day with another great dinner along the waterfront and then head back to the hotel.

My wake-up call comes at 7:30am and I leave the hotel by 8:00am. I’ve got a big morning of beach hopping planned before I have to catch my flight this afternoon.

My first stop is Camps Bay Beach, just on the other side of Table Mountain. It’s a beautiful beach but the water is freezing – and once again the “tablecloth” is in full effect over the mountain.

I take in the beauty for about an hour and then continue on to Clifton Beach which is just a 20-minute walk away. This beach came highly recommended by a KLM flight attendant I met at the hotel who spent all day here yesterday.

The walk is lovely and the weather couldn’t be better.

Clifton Beach, as it turns out, is peppered with large boulders in the water and on the sand that lend it a really dramatic look. I take a few pictures and then promptly park myself on the sand for a little while with a book.

I had hoped to have time to tour one of Cape Town’s townships while I’m here but I suppose that will have to wait for my next visit.

Later, I catch a taxi to the hotel around noon to shower and check-out and then it’s off to the airport.

It was a perfect morning and just what I needed considering the next 30 hours will be spent in transit between here and Cairo, Egypt. I have connections through Johannesburg and again back through Paris.

Next stop, the Pyramids!

Read More: Cairo on Camel Back