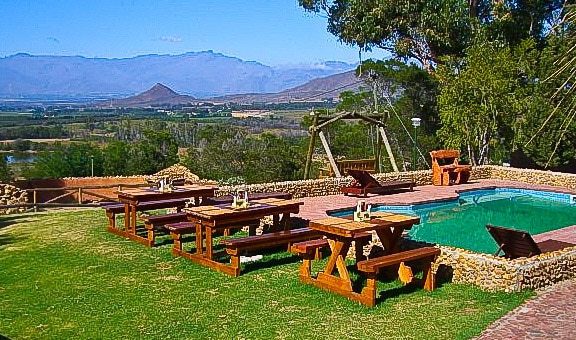 My 2nd annual 30-day trip around the world is well underway and after kicking things off in Peru, followed by a stop in Croatia, today brings me back to beautiful South Africa.

After a 20-hour journey from Dubrovnik including 2 connections, I finally arrive in Cape Town around 3:00pm on a glorious summer day.

I grab a cab and head straight for my hotel, the Westin Cape Town. Rates this time of year start at about $400 per night but thanks to my Marriott points (hooray for business travel!) I will be spending all 4 nights here free of charge.

I don’t have a solid plan in place yet for my four days back in Cape Town.

On my last visit to Cape Town on Round-the-World #1, you may recall that I hiked Table Mountain, spent some time at the Victoria & Alfred Waterfront, took the Robben Island tour, and checked out a few beaches over my 3-day stay.

It’s just such a beautiful city that I knew I had to come back again this year. And, in fact, Cape Town is the only repeat stop from last years’ trip.

So, my plan is to spend some quality time with the hotel concierge and get some local advice on what else I should see and do.

When I arrive at the hotel, I’m happy to learn that I’ve been upgraded to a lovely corner suite (thanks to my Marriott status – again, hooray for business travel). My suite has a view of both the V & A Waterfront AND Table Mountain…fantastic.

After I settle in, I head back down to meet with the Concierge, Luke.

Things to do in Cape Town

I give Luke the rundown of everything I saw on my last visit and ask for his advice on what else Cape Town has to offer.

He suggests a number of things including a day-trip safari. I didn’t think there were any safari options within a day trip of Cape Town so I’m excited for that option and book it for tomorrow.

I also decide to rent a car for one day to get out and drive around a little myself. Luke arranges that for me as well.

With my itinerary for the next two days complete, I head over to the V & A Waterfront for dinner. It’s terrific to be back along the waterfront but I make an early night of it.

Departure time for the safari tomorrow is 6:30am sharp.

Day 2 – A Safari near Cape Town

Obviously, going on a safari is pretty much the #1 thing to do here in South Africa.

But most of the game reserves are closer to Johannesburg so to get to one from Cape Town it takes a bit of a drive.

The game reserve Luke booked for me is called the Fairy Glen Game Reserve (sounds a little more like a retirement home than a game reserve but, hey, he’s the expert so I roll with it). They pick me up at the hotel at 6:30am along with a nice family from Lebanon staying at a nearby hotel.

It takes about an hour and a half to get to the game reserve but it’s a beautiful drive through the wine country.

When we arrive, they serve breakfast first at the lodge and then we join up with others from another group and climb into a huge jeep (think Indiana Jones ride at Disney) with our guides for the day.

I’m a little concerned during breakfast when I notice the hood up on the jeep as they worked to repair the engine. It’s not exactly confidence-inspiring to head out into the wild in a jeep that wasn’t running a few minutes ago. The last thing you want is a break-down at a time when you may, or may not, be surrounded by lions.

Nevertheless, the guides seem confident in the reliability of our vehicle so we all climb in and head out.

I’m a total rookie when it comes to safaris. But as I understand it, the mail goal is to view the African Big Five.

The Big Five refers to the lion, the elephant, the rhino, the leopard, and the buffalo. I’m not sure what to expect from a one-day safari since I’ve heard that some two-week-long safaris never even see them all.

But by the end of the trip we’ve actually seen 3 of the 5, plus a number of others animals. Not bad for a single afternoon!

The buffalo proved elusive and apparently it’s very rare to actually see a leopard since they are nocturnal animals.

But, we do see lions, elephants, and rhinos (oh my!) and get much closer to them than at your average zoo. Ironically, it’s the elephants we have to stay the farthest away from in the jeep because they have actually been known to charge the jeeps.

I wouldn’t want to be on the wrong end of that altercation.

The whole experience is a lot of fun but after 4 hours in the African sun, we are all pretty much done for. After a great lunch back at the lodge and a little time by the pool, we load into the van for the ride back to Cape Town.

All in all, a really fun day on safari near Cape Town.

Day 3 in South Africa begins with an adventure of a different sort – driving on the wrong side of the road. Another first for me.

My friend Kay warned me that the hardest part of driving on the other side of the road is shifting with your other hand if the car is a manual. So she advised booking an automatic. But I’ve driven a manual pretty much all my adult life and I was confident I could handle it.

But she was right, it wasn’t easy.

Driving on the “other” side

It turns out, the key to driving on the other side of the road is to forget everything you currently know about driving and start over from scratch.

Every instinct you have while driving on the other side will almost certainly be wrong. If you realize this sooner rather than later, you have a fighting chance of making it through the day without major incident.

And if you’re driving a manual, it doesn’t hurt to be left-handed either.