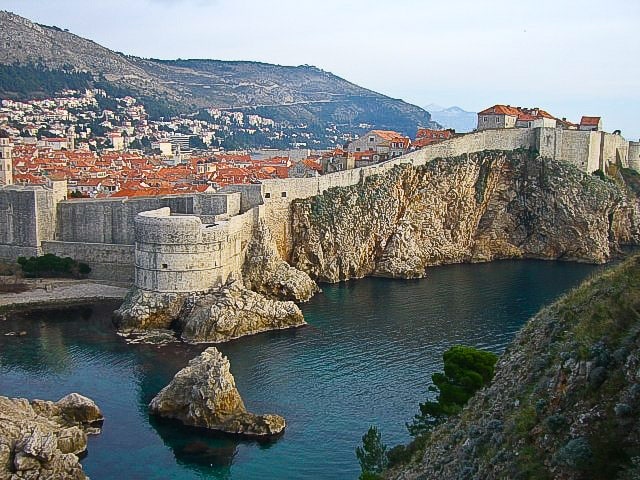 I couldn’t get all the way from Peru to Dubrovnik on Skyteam, just as far as Zagreb (the capital). So I had to book an additional flight on Croatia Airlines. It was dirt cheap, even for business class, so of course that’s what I booked.

Unfortunately, since it’s not high season, the flight times are few and far between so I’m faced with a little time to kill in the Zagreb airport. This turns out to be harder than it sounds.

The airport is tiny. The kind of tiny where you can just pull right up to the front door and leave your car for as long as you feel like it and no one cares.

There is no business class lounge (ouch) and only one food place boasting minimal options. The worst part is that everyone in the darn place is smoking like it’s their job. It’s like walking into a really smoky nightclub.

Sol, even though it’s a bit chilly, I find a place to sit outside for a while just to get away from the smoke.

The flight is a quick 30 minutes and as we approach Dubrovnik the views out my window are simply amazing.

The nice thing about flying into Dubrovnik on Croatia Airlines is that they have a free shuttle bus. The bus takes everyone on the flight from the airport into downtown as soon as all the bags are retrieved.

It’s a very scenic bus ride into town and I get to the hotel just in time for sunset (which, sadly, happens at 4:30pm this time of year).

Built in 1895 just outside the city walls, the Imperial Hotel entertained visiting royalty and celebrities for nearly a hundred years. Following the Serbian shelling of Dubrovnik in 1991, it abruptly became a refugee shelter and remained so for a decade.

In 2007, it reopened as the Hilton Imperial Dubrovnik after a complete renovation. It is a spectacular property and my room has a terrific view of Old Town Dubrovnik. After a full day of traveling, I grab dinner in the hotel and collapse in bed fairly early.

I’m excited to get an early start tomorrow!

This morning I got up extra early to watch the sunrise and it was totally worth the lack of sleep.

My plan for the day is to explore Dubrovnik’s historic Old Town.

Dubrovnik dates back to the 7th century. The walls that enclose the city to this day were built near the 9th century to resist barbarian invasions from the sea. By the end of the 12th century, Dubrovnik had become an important trading center on the coast, providing a much-needed link between the Mediterranean and Balkan states.

Dubrovnik continued to prosper until 1667 when an earthquake wiped out much of the city. It eventually became part of the Austro-Hungarian Empire until 1918 and then developed on its own after that; thanks, in part, to a growing tourism industry.

In December 1991, Serbian artillery launched an attack on Dubrovnik. The city was pounded with over 200 shells in 1991 and 1992. It is only in the past few years that tourism has begun to rebound to pre-war levels.

As I enter the Pile Gate on the West side of Old Town, the first thing I see is the white stone-embossed Stradun.

The Stradun has been Dubrovnik’s main street for festivals, shopping and strolling for centuries.

It was created in the 11th century when a channel that separated an islet from the mainland was filled in with brick and later recovered with white stones. The shelling of 1991 blasted holes in much of the Stradun.

But it has since been patched up with white stone quarried from the nearby islands. The stones give the street sort of a warm, white glow.

As I walk thru Old Town, it reminds me a little of a combination of Mykonos, Greece and the Italian Amalfi Coast.  (Or, at least what Mykonos would be like if you went there in the winter.)

The streets are narrow, winding and mostly empty but I can tell that this town would be BIG FUN in the summertime. The walls that surround the city give it an ancient feel and the architecture is very old-world.

In the afternoon, I take a tour of the city walls.

For about 8 bucks you can buy a ticket to walk around the tops of the Old Town walls. The 2-mile long walls are definitely the city’s most striking feature.

The walls have endured nearly unchanged for five centuries but came under serious rocket attack in 1991, suffering 111 direct hits. All the damage has since been repaired and visitors can once again get a panoramic view of the town from atop the walls.

Something else that becomes obvious as I look down from the city walls is the post-1991 repair job on the rooftops. When the smoke cleared in 1992, one of the most urgent problems was repairing the city’s tiled roofs to prevent water damage from rainfall.

The rosy terracotta tiles that top all of Dubrovnik’s buildings were originally produced in a nearby tile factory that had long since closed. Replacements of the same color proved impossible to find.

Eventually, the government ordered new tiles from France and northern Croatia. They scattered them randomly to make the color difference less obvious. A walk around the walls reveals a patchwork of colors that should someday (hopefully) blend into one.

On the Beach in Dubrovnik

When I leave the hotel on my second day in Dubrovnik, I decide to take a walk to the other side of Old Town and up along the coast.

I walk most of the morning and then spend a little time on a great beach (Banje Beach). It also looks like it would be a lot of fun in the summer. It has the beautiful greenish-blue clear water that Greece does and a spectacular view of the city.

Of course, since it was only about 60 degrees, the beach is deserted except for me. But I don’t mind one bit. After lunch in Old Town, I spend a little time shopping and then head back to the hotel.

I need to pack since I’ve got a 6:40am flight back to Zagreb in the morning. And another FIVE hours to kill at the smoke-filled Zagreb airport before my flight to Paris.

If you’ve been following along on my 2nd annual round-the-world trip so far, you may recall that my friend Lynn gifted me with a travel buddy for this trip. A travelling gnome (complete with passport).

And I’m happy to say that I have finally given him a name! It’s Jerome.

Jerome the Travelin’ Gnome. Or “Romy” for short.

He also has a new friend from my last stop in Peru, the stuffed alpaca that I just had to buy at the airport.

So, of course, if the gnome needs a name, so does the alpaca. I have decided to keep it simple and call him Al…last name, Paca. They are getting along famously and drinking all the wine.

Well, someone’s drinking all the wine and I’m just SURE it’s not me.

So, after killing a few hours in the smoky haze of the Zagreb airport, I’m happy to land back in Paris around 3pm this afternoon. Since my flight to Cape Town doesn’t leave until 11:15pm tonight, I head into town to have dinner with local friends.

It’s a great meal and my last layover long enough to go into town on this trip, so I head back to the airport around 9pm.

This is going to be my first long flight back on Air France. Last year, I enjoyed the many comforts of First Class on the way to Cape Town and I’m a little worried about how their Business Class will compare on the 10 hour flight.

(I know, cry me a river, right? She’s in Business Class, God forbid – but after all I am an admitted airline snob – what are you gonna do?)

I have flown AF in Business a couple of times from Atlanta in past years and have never been particularly impressed – on the same route, Delta’s business class service is far superior.

So, I’m pleasantly surprised to see that the plane flying us to Johannesburg has recently be re-fitted with the brand new Air France Business and First Class seats. Though I admit I’m a little wistful as I walk past the super-fancy First Class seats on my way to my seat, the Business Class seats are excellent.

Definitely better than KLM’s on the flight from Peru and even better than Delta’s. Each seat has its own on-demand video screen, laptop ports, and the ability to recline to almost 180 degrees. Excellent!

After a delicious meal with great wine (one thing Air France does do well and hey, Jerome was thirsty), I put my seat in the “sleep” position and actually sleep for about 6 hours.

Unfortunately, we land in Johannesburg almost an hour late due to a mechanical delay departing Paris last night. This leaves me with less than 30 minutes to catch my connection to Cape Town which, of course, I miss.

My own fault really, the AF flight is supposed to land at 10:50am and South African Airways operates a Jo’burg – Cape Town shuttle departing every hour on the hour. Last year,  I booked the 1:00pm flight not knowing how long it would take to clear customs, transfer to the domestic terminal, etc.

Because my flight was on time last year, I ended up with more than an hour to kill in the airport – which just reeks of inefficiency! So this year, being the over-confident world traveler that I am these days, I booked the noon flight and of course, my Paris flight was delayed.

So, when I finally got to the South African check-in counter at 10 ’til noon, the agent (not surprisingly) informs me that there is no way I’m making the flight. She then tells me that because I’m flying on a “restricted economy (i.e. cheap web fare)” ticket, she is unable to re-book me on the 1:00pm flight until I pay the re-booking fee at the ticket counter.

Uh-oh, I think, this is the part where my $150 cheap web fare doubles in price. But, the fee turns out to be only 175 rand (about $28) and there are still plenty of seats on the flight so all is well.

Lesson learned, though, about tight connections after a long international flight. Next stop, Cape Town!