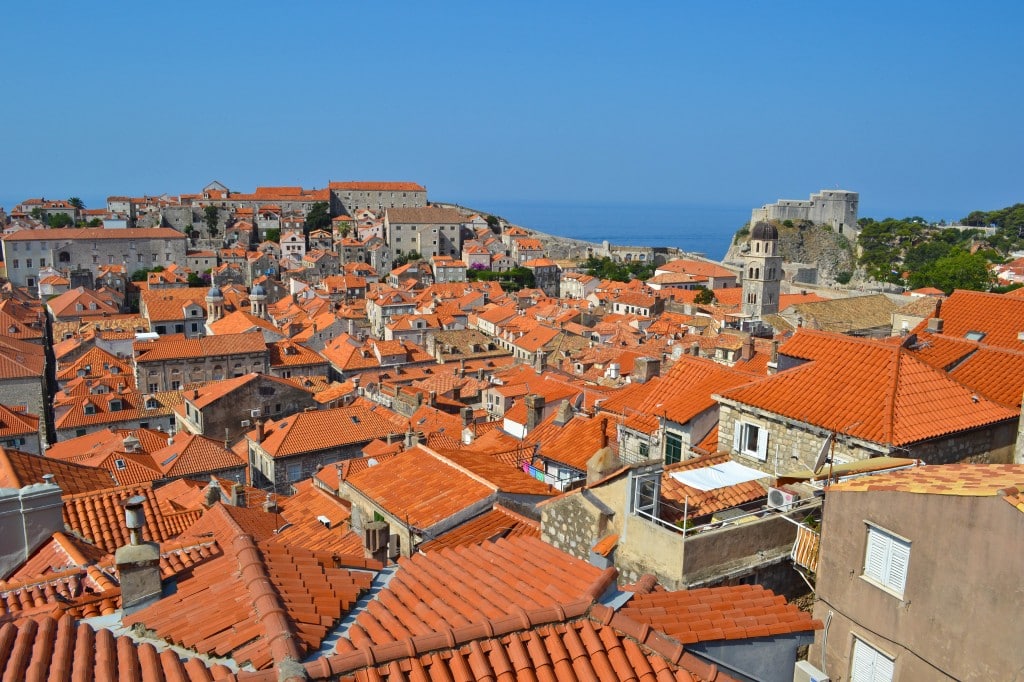 We arrived at noon from Montenegro after one of the most scenic bus rides I’ve ever taken along the Bay of Kotor. As you follow the cliffside road by the sea, you get your first views of the city walls of Dubrovnik from above. It’s almost enough to make you gasp.

We made our way from the main bus station to the old city and entered the city walls through the Pile Gate. Just a few steps from the Stradun (Dubrovnik’s main boulevard) we located our apartment for the next two nights, Apartment Bete.

We’d booked through AirBnb for the first time and I was curious to see what the apartment would be like. It turned out to be just as advertised and the owner was lovely. After settling in, it was time to head out into the heat of the day and see the sights.

I’d been to Dubrovnik once before, on RTW #2.

But it was a January visit so I was really looking forward to enjoying the city in warmer weather. And boy, did I get my wish. As it turns out, a Dubrovnik summer is a sweltering experience. Sort of like being in a big marble sauna. And bursting with tourists. So make that a big marble sauna full of cruise ship passengers.

Cruise ships dock daily and you can see the ebb and flow in the crowds in the old city as they arrive and depart each day. If you’re staying in the city, it’s best to see as much as you can in the early morning or in the evening and leave the heat of mid-day to those on the ships.

But we didn’t have the luxury of time so we headed out into the blistering afternoon heat in search of some lunch. As we wandered, I tried to get my bearings on the maze of marbled streets and remember where things were. Our search for a lunch spot led us near the Ploce Gate and I decided to show Shannon Banje Beach while we were close to it.

When I’d last seen Banje Beach, I had it all to myself.  Now, it belonged to throngs of swimsuit-clad sun worshippers dotting the sand and the sea. Still beautiful, but I couldn’t help but think that I preferred the tranquility of the winter version.

After lunch, we wandered the streets a bit more and plotted out our plan for the next day. By 4pm, the heat had overtaken our motivation and we headed back to the apartment to shower and rest. That evening we grabbed a seat at the famous Buza Bar which hugs the cliffs outside the city walls for sunset cocktails. Also known simply as “Cold Beer” for the signs that point the way toward it, the entrance to Buza is a simple, unmarked opening in the south wall. Unfortunately, it seems that this time of year the sun sets just outside the view of the bar – strike #2 for summer.

After sunset, we were certain that the evening would cool off and be more tolerable. It was not to be. We sweated through an outdoor dinner with a nice view but nothing in the way of air circulation before giving in and calling it a night.

This morning we were up bright and early to beat both the heat (we didn’t) and the cruise ships passengers (we did) to take a walk around the city walls.

The UNESCO World Heritage Site of Old City Dubrovnik is surrounded entirely by intact city walls running almost 1 1/2 miles around the city. Dating back to the 9th century, the complex structure consists of a series of walls, bastions, casemates, towers and detached forts. The walls were added to as needed during historically difficult and dangerous times for the city. In more recent history, the “Siege of Dubrovnik” saw rockets rain down on the Old City for 3 months in 1991 in a precursor to what later became the Balkans conflict.

In the aftermath of the conflict, Dubrovnik faced a period of rebuilding. One of the biggest challenges was in replacing the damaged burnt orange roof tiles that define the city’s architecture. With the original factory no longer in business, new tiles were brought in from further afield. The brighter color of these new tiles checkering the rooftops of the old city is a constant reminder of Dubrovnik’s recent past. From the city walls it is easy to observe the contrast of these new tiles, it’s a constant reminder of Dubrovnik’s need for defense both across the centuries and in more recent history.

After our tour of the city walls, we went back to the apartment to cool off and change out of sweat-drenched clothes before venturing outside the city walls to check out Dubrovnik’s newest attraction (just opened in January) – the Cable Car.

With a little uphill walking we easily found the lower station and bought tickets. Miraculously, there was no wait at all and in minutes we were loaded into a bright orange cable car and being gracefully pulled up the side of a mountain on steel cables.

Like the views from the bus, the mountain views overlooking the city known as the Pearl of the Adriatic are simply spectacular. With its soaring city walls, the unique architecture of Dubrovnik from the air is a sight to see. There were several tour groups crowding the top station so after we took a few pictures we got in line to head back down.

After lunch it was time to head back to the apartment to cool off again. Thank God it was in such a great location and had a powerful air conditioner. If it had not been for that, I’m not sure I would have survived the day (as it was I showered and changed clothes 3 times).

Since we had seen all of the sights on our list, we decided to spend the afternoon at another cliffside bar near Buza where we’d heard you could watch the cliff-divers over a cold beer. Sounded like the perfect way to while away a sultry afternoon.

A similar hunt for an unmarked hole in the south side of the city walls leads out to the sea and to one of the best bars/swimming spots in all of Dubrovnik. If you didn’t know what you were looking for, Bard Mala Buza would be impossible to find. But once we emerged through the wall, we were greeted with sun-splashed rocky terraces dotted with white umbrella-shaded tables.

We grabbed an umbrella-shaded table, ordered a round of Croatian beers and listened to the waves crash against the rocks as tourists and locals alike enjoyed a dip in the emerald green Adriatic Sea. We watched the show as several cliff-jumpers plunged into the sea.

For our final night in Dubrovnik, we caught a break. There was an evening breeze that was enough to make dinner outside much more pleasant than the night before.

All things considered, my visit to Dubrovnik this time was very different from my winter visit. Don’t get me wrong, they were both good. Dubrovnik is a fantastic city and whatever time of year you come you’ll be wowed.

That said, I don’t know that I would visit the city again at the height of summer. Though, I would definitely consider another off-season visit. In the winter, as I’m sure in the spring and the fall to some extent, the crowds are gone, the weather is mild and the hotel rates are much cheaper.

On my last visit, I stayed at the beautiful Hilton Imperial – a Dubrovnik landmark – for little more than 100 euro a night. This time, that same hotel would have cost more than 300 euro a night.

Even in January, the weather is mild. As the Dubrovnik Tourist Board will tell you, “In winter, Dubrovnik doesn’t wear a coat.” And it’s true; I managed my whole winter stay there in nothing heavier than a light sweater. The city walls were mine alone to explore for hours at a time and I walked the Stradun with just the locals in the mornings. It was simple, it was perfect, it was Croatia.

Next up, an overnight ferry up the Dalmatia Coast!

Read More: Dazzling Dalmatia: The Best of the Croatian Coast in 7 Perfect Days