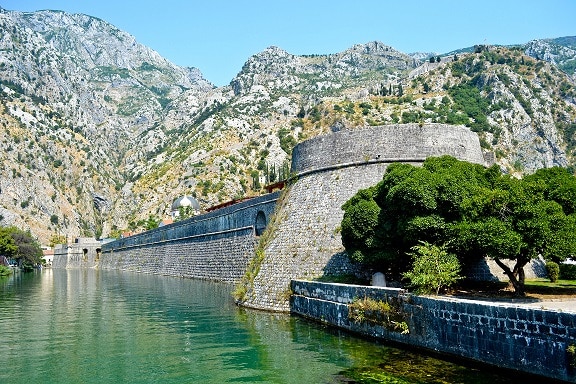 It’s often described as Southern Europe’s most spectacular fjord. Though it’s technically a submerged river canyon, it’s easy to understand the sentiment behind that label.

Surrounded by sapphire bays on one side and Mount Lovcen on the other, Kotor’s Stari Grad (Old Town) is protected by sturdy walls built in the 9th century that have protected Kotor from centuries of would-be invaders. The marbled lanes of the Old Town contain a labyrinth of churches, cafes and shops – each piazza more delightful than the last.

Up the face of Mount Lovcen are miles of ancient fortifications reminiscent of a mini Great Wall of China including a castle and a monastery. If we’d had more time – and I do wish we had – we would have climbed them, the views over the bay are said to be spectacular.

While Montenegro is promoted heavily as a tourist destination within Europe and the Balkans, most Americans would be hard-pressed to find it on a map.

Situated just southeast of Croatia and north of Albania along the Adriatic Coast and bordered by Serbia and Bosnia to the east, Montenegro enjoys a distinct natural advantage in the scenic department.

We arrived in Tivat, Montenegro exhausted after getting no sleep in Mykonos the night before (our own fault) and with layovers in both Athens and Belgrade, Serbia. By 2:30pm we’d made the short cab ride to our hotel in Kotor (the Hotel Tianis) and were ready to head out and see the sights.

The first order of business was to visit the walled Old Town. As we entered the gate, we noticed a tourist desk and stopped to inquire about bus tickets to Dubrovnik for the next day. There was a direct bus leaving at 8:30am so we decided to go for it.

It didn’t leave us with much time in Kotor but by now we’d discovered that it would be quite possible to explore the tiny Old Town in an afternoon. In a perfect world, I’d have loved to stay one more full day to have time to climb the fortifications and also get out onto the water with a cruise around the Bay of Kotor.

But, as usual, time was short so we settled for a lovely afternoon exploring the maze-like marbled streets of Stari Grad. We stopped for dinner (at the restaurant pictured above) and then walked back to the Hotel Tianis along the water for some much-needed sleep.

Driving the Bay of Kotor

The next morning we boarded the bus for perhaps the most spectacular bus ride I’ve ever taken.

The bus hugs the curves of the entire Bay of Kotor on its way to Herceg Novi before finally crossing the Croatian border to Dubrovnik. The views along the way are a sight to behold – I’ve included many pictures from the ride in the photo gallery below. Steep cliffs, red-tiled roofs and locals enjoying a dip in the cool sea on a hot summer day.

The ride itself takes only about two hours but we did spend an hour between two border crossing checkpoints where they collected passports from everyone on the bus before returning them stamped.

Before boarding the bus this morning I thought I’d seen as much as I needed to of Montenegro, now I’m not so sure.

There are so many quaint towns bordering the Bay and islands with historic cathedrals floating in the distance. Spending a few days driving (or sailing!) around the Bay of Kotor making stops along the way would be an exceptional way to spend a holiday.

Definitely something to consider someday.

But for now…on to Croatia!