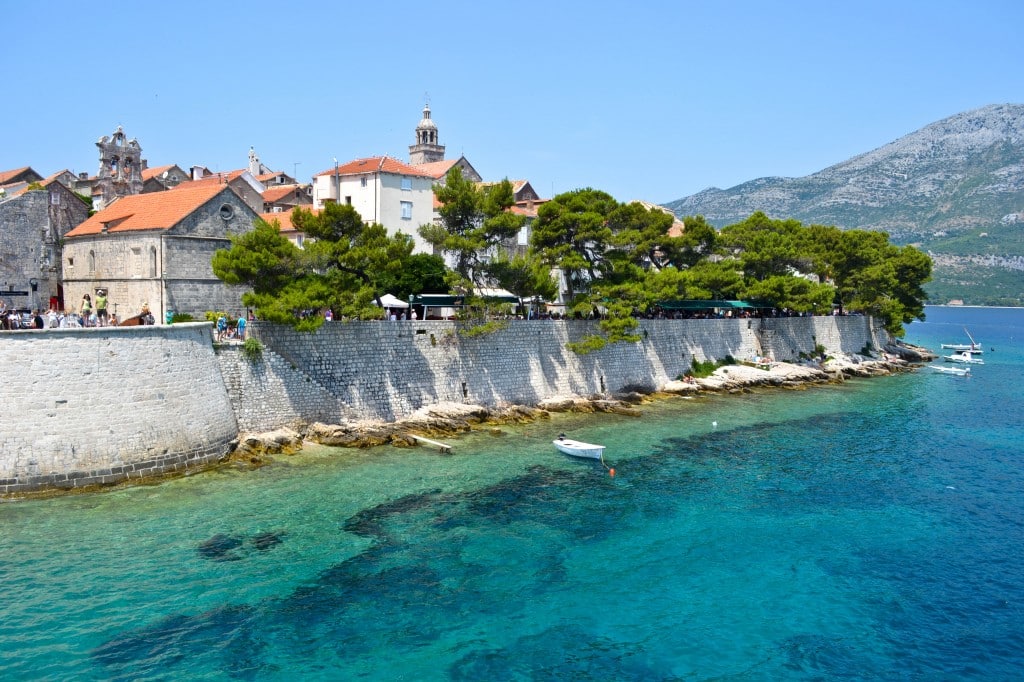 I’m trying to think of the opposite of adorable to describe our cabin on the Jadrolinija Ferry ship Liburnija. Utilitarian? Drab? Depressing? Take your pick. My first thought when I opened the door and we warily peeked in was, “Oh, how the mighty have fallen.” Just a week ago we were living large in a plush balcony cabin on MSC. Now we were in a dorm room at sea.

We had hoped for a nice big window from which to take in the coast line, instead we got a tiny porthole (turns out you had to be on Deck 4 or higher to get the bigger window – wish I’d known that). The cabin technically had A/C but it was about as effective as a single car vent trying to cool your entire living room. For the sake of my sanity I shall refrain from comment on the bathroom.

Determined to put a positive spin on it, I thought at least it was a safe place to store our stuff for the next 23 hours and we would be able to get a little sleep and take showers in the morning before docking at 7am. Who cares if we have to head topside to enjoy the views of the coast? We could use the fresh air anyway!

Before boarding the Jadrolinija Ferry Shannon and I had tried to do some research online about what to expect. We quickly learned there was precious little information about the practicalities of these type of ferries. For example, what kind of food is offered on board? What kind of currency do they take? Is breakfast included with your fare? The information available online varied widely based on the ship in question.

Since we didn’t know the name of our ship, we really had no idea what to expect. That’s why I thought it was important to write a post about the experience to provide information to others considering this or any of Jadrolinija’s ferries.

The Liburnija was basically an aging, floating bucket of bolts. The only positive thing I can say about the ship itself is that it did turn out to be sea-worthy. There was a main restaurant that served breakfast, lunch and dinner. Since we had booked a cabin, breakfast was included with our rate – which was good news.

There was a large sundeck on the back of the ship. No chairs but plenty of passengers had brought beach towels and spread them out on the deck to sunbathe most of the ride. Next to the sundeck was a snack bar with limited food options but a full bar. As it turned out, they accepted both euro and kuna which was excellent since we were trying to use up the last of our Croatian kuna and didn’t have much left.

By 8:30am we set sail from Dubrovnik. We decided to spend some time on the sundeck enjoying the views of the coast line since there was certainly no reason to hang out in our cabin. We had several stops scheduled throughout the day at islands I was looking forward to seeing. Of course, they were just quick stops to let passengers on and off but I still hoped it would be scenic. Our first stop was the island of Mljet, unfortunately there wasn’t much to see from the ferry port.

We had much better luck on our second stop around noon. The island of Korcula was surrounded by beautiful city walls and green sea reminiscent of Dubrovnik. It looked like a terrific holiday spot and I wished we’d had some time to explore.

As we pulled away from Korcula, we passed a number of beaches filled with windsurfers and kite surfers. They were a lot of fun to watch and we were really starting to enjoy the ride a little. The coastline was just as gorgeous as I’d heard.

Our next stop was the island of Hvar. Another island of legendary Croatian beauty but again there wasn’t much to see from the ferry port. As we were pulling away from Hvar, disaster struck.

Shannon and I were on the top deck taking a couple of pictures. I’d set down my cell phone and bag on the bench next to us. We’d been up on this sun deck most of the day and there were only a few other people up there. I’d been keeping watch on my things out of the corner of my eye, they were maybe three feet from where I was standing. When we finishing taking a few pictures and were back out to sea, I reached down to pick up my bag and phone only to discover that my phone was gone. Just like that.

Looking back, I should have known better. But we’d settled into a false sense of security after being on the ferry all day with the same people and I didn’t keep as close a watch on my stuff as I should have. It absolutely amazes me how fast it must have happened. Neither Shannon nor I saw anyone go anywhere near our stuff. I blame myself. And the jerk who thought a two year old Samsung was a good score.

Since we were now back at sea, I had no way to contact T-Mobile and get the phone shut off. I was paranoid that whoever stole it was going to be making international calls all the way to Rijeka for the next 14 hours and I’d be responsible.

I went to the ship’s reception desk to inform them of the theft. As you might expect, they pretty much shrugged it off and said there was nothing they could do. I got the impression this sort of thing happens a lot, they didn’t express any degree of surprise. Thanks for nothing Jadrolinija.

The Race for Wifi

Our next and final stop before heading out to sea for the night was Split. We’d be docking there in just over an hour. I asked the reception person if there was a wifi place near the ferry terminal in Split. She said there was so I decided I’d make a run for it with my laptop and try to Skype T-Mobile while the ship was docked for just 30 minutes. It was going to be a race.

When we docked in Split, Shannon and I were first off the ship and searching for the internet cafe. Unfortunately, it was a good 10 minute walk from the ship which didn’t leave much time. After having the call dropped twice, I finally got through to T-Mobile with just seconds left to go on my internet connection. I’d sent Shannon back to the ship to hopefully ensure that they waited for me. I managed to get the phone shut off and determine that only one call had been made in the last hour that would cost me only $1.50 – definitely could have been worse.

Just as I was about to thank the T-Mobile woman and hang up, the internet connection cut-off. Talk about close. I grabbed my laptop and ran from the internet cafe – as fast as I could run in flip-flops – the entire half mile+ back to the ship.

Meanwhile, Shannon was losing her battle with the ship’s crew and they were about to close the door and shove off when she saw me running toward them. Since they now saw me coming, they left the door open long enough for me to leap aboard before closing it quickly behind me as we set sail. Could…not…have…been…closer.

But I’d been successful, I managed to get the phone shut off and now I’d sleep much better tonight. The cell phone thief couldn’t do any more damage. I have no idea what I would have done had the ship left me. I guess I would have tried to find an overnight train to meet the boat in Rijeka the next day. I’m really glad I didn’t have to figure that out.

After catching our breath and pouring ourselves a hefty congratulatory glass of wine from the bottle we’d brought with us, we had dinner at the ship’s restaurant. We’d thought to bring some sandwiches for lunch (and were glad that we had) but by dinner time we were famished. The dinner menu was uninspiring but the prices were reasonable and we weren’t picky at this point.

After dinner, we headed back to the cabin to try to get some sleep before our early morning. If it was possible, the cabin was now even hotter than it had been in the afternoon. Neither of us got any sleep in the stuffy cabin and were just happy to dock in Rijeka the next morning and finally get off this dreadful ship. We were easily able to navigate our way to the bus station in Rijeka and book tickets for the 8:10am direct bus to Ljubljana.

So now, since it’s impossible to replace a US cell phone while overseas, I’m without a phone – my primary link to the world when I travel – for the remaining two weeks of this trip. It sucks but I suppose it could have been worse. It could have been my brand new camera that was stolen…or my passport. The cell phone is an inconvenience, certainly, but it’ll be easily replaceable once I get home.

As for Jadrolinija, though the sights along the way were certainly spectacular at times, there’s got to be a better way to see them. I definitely won’t be signing up for any more 23 hour ferry rides up the Croatian coast. But that won’t keep me from coming back to Croatia. I really think I’d like to visit Korcula Island sometime…maybe next time by yacht.