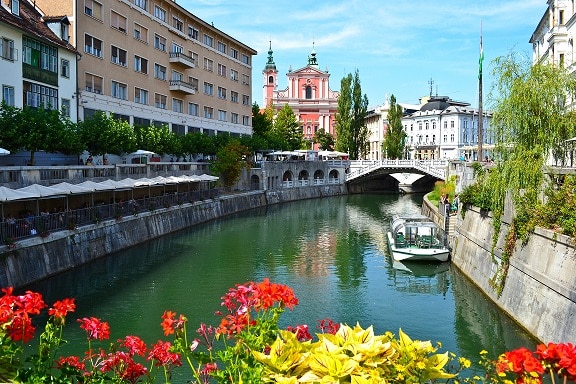 Shannon and I arrived in Ljubljana around 10:30am after a pleasant bus ride from Rijeka. As we made our way into town in search of our hotel, we got our first glimpse of the town. It was enough to make me forget all about the lousy ferry ride from Dubrovnik the night before.

Known as one of the greenest countries in the world due to its expansive forests, tiny Slovenia is bordered by Italy, Austria, Hungary, Croatia and a small stretch of the Adriatic Sea. Like Croatia and Montenegro, it was part of the former Yugoslavia before gaining independence in 1991. Since then it has turned itself into a pint-sized tourism machine.

The heart of that machine is the capital city of Ljubljana. Translated loosely in Slovene as “beloved” it’s easy to see what draws visitors to this colorful town.

Cafe tables line the cobblestone streets of the Old Town along the Ljubljanica River which bisects the city. Architect Jose Plecnik remodeled Ljubljana in his distinct modern yet classical style and the city is defined as much by his work as Barcelona is by Gaudi’s.

Spanning the river are a number of distinctive bridges designed by Plecnik. The most striking is the Triple Bridge in the center of town which serves as both a popular meeting spot and a symbol of the city. The Dragon Bridge features Ljubljana’s mascot on both ends and the Flower Bridge is the perfect spot to photograph the river with the salmon-colored Franciscan Church of the Annunciation in the distance.

And finally there is the recently-opened Butcher’s Bridge. Shortly after its opening last summer, padlocks engraved with the initials of couples in love started appearing on its steel wires. It’s also known as Bachelor’s Bridge and I saw one unlucky soul who’d been chained to it by his friends while forced to ask women walking by to sign his t-shirt. They take their bachelor parties very seriously here in Slovenia.

The weather was overcast when we arrived and it would get worse before it got better. Our hotel in Ljubljana was the centrally-located Hotel Emonec and it turned out to be the perfect choice – great room, reasonable rate and friendly staff. After checking in and dropping our bags, we headed out to explore a little.

First, we bought tickets for the funicular up to Ljubljana Castle. From there we made the climb up to the watchtower to check out the views over Ljubljana below. On a clear day, you can see two-thirds of Slovenia from this perch. Unfortunately, we couldn’t see much more than the city below.

Later we sat out a rain delay with a Slovene beer at a cafe near Preseren Square. For dinner on Shannon’s last night of the trip we tried a couple of tasty local dishes at a restaurant along the river.

The next morning I said goodbye to Shannon as it was finally time for her to return home to real life. It’s been great to have a travel buddy for the past 2 ½ weeks and I was sad to see her go. But on the bright side, I’ve still got another 2 weeks of exploring the Balkans on my own before returning home myself.

The sun had finally made an appearance this morning so I decided to catch a bus out to Lake Bled. Just an hour or so later I arrived in the Julian Alps resort town of Lake Bled. The bus drops you off just a few steps from the lake so it was really easy to get around town.

Scenic Lake Bled is home to Slovenia’s only island and its number one tourist attraction. To reach the island, you can either rent your own rowboat or hire an oarsman with a handmade pletna boat. From the dock, 99 steps lead up to the Church of the Assumption.

On summer Saturdays like today, there are a steady stream of brides and grooms on the island. It’s tradition for a groom to carry his bride up the steps to prove his fitness for marriage (I’m told only 4 out of 5 actually make it). From the island the views are like something dreamed up by a tourism bureau – spectacular vistas of the Julian Alps and Bled Castle – Slovenia’s oldest – soaring high above.

I walked all the way around the lake photographing the island from every angle before heading back into town to catch the bus back to Ljubljana.

By 3pm I was back in Ljubljana on a perfect summer Saturday afternoon. Unlike Dubrovnik, the heat was mild, the breeze refreshing and the tourists were at a minimum. There were people everywhere (mostly locals) out enjoying the day.

As the sun set, the cafes and bars lining the river swelled with activity and live music started up from seemingly every corner. Just another Saturday night in Ljubljana. It was a great couple of days in Slovenia and I hope to return someday to see more of this beautiful country.