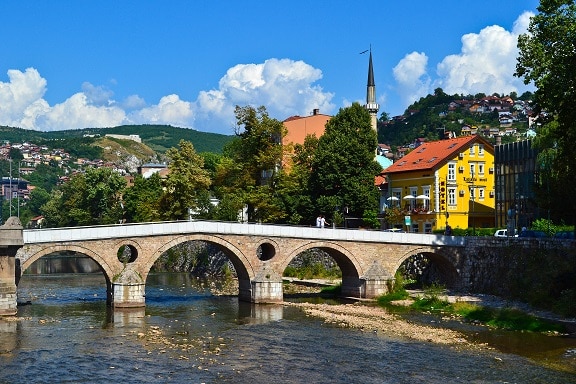 Nestled between the rugged mountains of Romanija, Bjelašnica and Trebevic and divided by the Miljacka River, lies Sarajevo – the capital of Bosnia and Herzegovina.

Historically, Sarajevo was famous for its religious diversity. Followers of Islam, Orthodoxy, Catholicism and Judaism coexisted here for centuries inspiring the nickname “The Jerusalem of Europe.” In the 1980’s Sarajevo gained world notoriety as the host city for the 1984 Winter Olympics but today it is more likely remembered as ground zero in the Balkans conflict.

After suffering tremendous losses during World War II, Sarajevo was rebuilt and greatly expanded. In fact, the city almost tripled in size during the formative years of socialist Yugoslavia. By 1984, when Sarajevo hosted the 14th Winter Olympic Games, it was a modern city of half a million people.

Unfortunately, the Olympic flame would soon burn out and just eight years later Sarajevo was trapped in a bloody civil war. In addition to being exposed to daily sniper and mortar fire during the Yugoslavian conflict, the inhabitants of the city suffered severe shortages of food and fuel during the nearly four-year siege. During this time, the only life-line was an 800-meter-long tunnel – dubbed the Tunnel of Hope – through which food and other supplies were brought in.

From 1992 to 1995, over 12,000 people were killed in the Sarajevo region – almost 2,000 of them children. Throughout the city and surrounding countryside, new cemeteries opened while those existing expanded.

In the aftermath of the siege, the Dayton Agreement finalized the borders of Bosnia and Herzegovina as they stand today and the city of Sarajevo has picked up the pieces and forged ahead in peace.

I arrived in Sarajevo after a quick flight from Ljubljana and checked into the modern and centrally-located Hotel Safir. With only one day to explore this historic city, I had a lot of ground to cover.

I began my tour just outside the door to my hotel in the bustling old Turkish quarter of Bascarsija. With its marble-flagged streets, expansive courtyards full of cafes and an open space nicknamed “Pigeon Square” for its proliferation of the birds, Bascarsija is the heart of Sarajevo’s old town and offers a glimpse into its Ottoman history. Building started in 1462 and continued through the 16th century. The streets of Bascarsija still bear the names of more than 80 trades that operated here at its height.

After leaving Bascarsija, I emerged along the Miljacka River. Sarajevo’s most famous bridge – Latinska cuprija (The Latin Bridge) – was built in the late 18th century and is a fine example of the late Ottoman bridge construction style.

On June 28, 1914 the Latin Bridge etched its spot in history as the sight of the assassination of Archduke Franz Ferdinand of Austria, heir apparent to the Austro-Hungarian throne, and his wife, Sophie, Duchess of Hohenberg. The political objective of the assassination by a group of six Bosnian Serbs was to break off Austria-Hungary’s south-Slav provinces so they could be combined into a Greater Serbia or a Yugoslavia.

Assignment of responsibility for the bombing and murders of June 28th is highly controversial because the attack ultimately led to the outbreak of World War I just one month later.

I continued my walk along the river and up a hill into a residential neighborhood to visit one of the many cemeteries surrounding Sarajevo. It was quite moving to see the mass of white grave markers all dating from 1992 – 1995. The city is literally surrounded by them. It’s difficult to think that while I was in college, this is what was happening here.

The ravages of war in Sarajevo are so recent, so vivid.

After leaving the cemetery, I walked back through the Turkish quarter to visit both the Sarajevo Cathedral and the Gazi-Husrevbey Mosque. Just another example of how different religions co-exist peacefully in Sarajevo.

Despite the fact that the scars of war are still very visible everywhere you look, Sarajevo’s spirit remains unbroken and there is no doubt its former shine will return.

My overall impression of the city was overwhelmingly positive. I never felt even remotely unsafe. Everyone I encountered was extremely friendly and the city is working hard at reclaiming its reputation as a tourist destination.

From what I’ve seen, they’re well on their way.