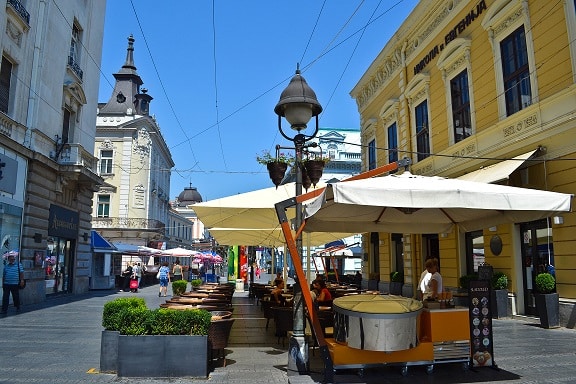 I’ll be honest. I didn’t have high expectations for Serbia.

But it didn’t make sense to plan 3 weeks in the Balkans without a visit to one of the region’s most prominent nations. So here I am, with two days to explore the country once considered the “bad boy” of the Balkans.

The history of Yugoslavia

The break-up of the 6 nations that made up the former Yugoslavia was a complicated and bloody affair that dominated international headlines for most of the 1990’s.

Since I am visiting all 6 former Yugoslav nations on this trip, I thought a quick history re-cap was in order. Especially since I knew embarrassingly little about Yugoslavia myself before arriving here.

In the past few weeks I’ve found that the story of the break-up varies quite a bit depending on who is telling it. But I’ll try to piece together as accurate an account as possible.

Originally known as the Kingdom of Yugoslavia in 1929, the region was renamed in 1963 as the Socialist Federal Republic of Yugoslavia (SFRY) when new nations were added after World War II. The six Socialist Republics that made up the SFRY were:  Bosnia and Herzegovina, Croatia, Macedonia, Montenegro, Slovenia and Serbia.

The beginning of the end

The SFRY broke up in 1991-1992 in a series of wars that followed independence declarations by Slovenia and Croatia on June 25, 1991, and then Bosnia and Herzegovina on March 5, 1992. Macedonia left the federation peacefully on September 25, 1991.

Following the start of the Bosnian War in 1992 the JNA officially withdrew all its forces from Croatia and Bosnia before disintegrating into a largely Serb-dominated military force that continued the battle until the signing of the Dayton Agreement ended it in 1995.

The wars ended in various stages; mostly resulting in full international recognition of new sovereign territories, but not without massive economic disruption to the young states.

In the years that followed, Serbia weathered a period of political turmoil including the handover of Slobodan Miloševic to The Hague and the assassination of a reformist Prime Minister in 2003. In 2004, the country gained a new president in pro-European Boris Tadic and with his re-election in 2008 re-affirmed its pro-European future.

A new chapter for Serbia

The Serbia of today has re-emerged from the dark cloud of the 1990’s into a country that has much to offer visitors.

With limited time and transportation options, I don’t expect to be able to see much more than the city of Belgrade itself during my brief stay.

But I get lucky, because I happen to have a local connection.

On my Carnival Cruise back in April, I made friends with our cocktail waitress Magdalena, who is from Serbia. When I told her I’d be visiting her country this summer, she gave me her contact information and said she’d be happy to show me around.

So, of course, I jumped at the chance for a tour from a Serbian native.

On the morning I arrive in Belgrade, Magdalena and her husband Milan, make the 2-hour drive from their home to meet me in the lobby of my hotel, the lovely and centrally-located Hotel Opera Garni.

After touring the streets of Belgrade for a bit, Magdalena explains that Novi Sad is a much more beautiful part of the country. She suggests we head there for the rest of the day.

Novi Sad is a 2-hour drive away, but I’ve heard great things about it. And if they’re willing to take me all that way I am more than willing to go!

It turns out to be a scenic drive through rolling farmlands filled with corn, peanuts and sunflower fields. Two hours later, we arrive in the heart of Novi Sad.

The Beaches of Serbia – Novi Sad

The second largest city in Serbia, Novi Sad is the capital of the northern province of Vojvodina.

Though just 70km from the busy streets of Belgrade, charming Novi Sad seems like a world away. Our first stop is the focal point of the city, the Petrovaradin fortress with sweeping views over the Danube River and old town below.

From there, we head to the beach and it’s the surprise of the day for me.

I never pictured a beach scene like this one in Serbia – it’s like South Beach meets the Danube. Thousands of beachgoers are out enjoying the sunshine on a Monday afternoon.

We stop in a beachside bar for a cold beer before moving on to our last stop, the Old Town, for dinner.

It was a fantastic day and I’m so grateful to Magdalena and Milan for sharing their country with me and being such terrific hosts.

They are headed back out to sea next week on the Carnival Paradise which will be sailing out of LA for the next few months. When they return, they hope to start a tourism company in Novi Sad to provide tours to others exactly like the one they gave me. Judging from how much I enjoyed their tour, the business is a sure thing.

After a full day in Novi Sad, the plan for my final day is to spend more time exploring Belgrade.

Situated at the confluence of the Danube and Sava Rivers, Belgrade is Serbia’s edgy and energetic capital.

The city is a blend of architectural styles with art nouveau buildings and socialist blocks sitting side-by-side. Belgrade’s cafe culture is a staple of city life and the pedestrian promenade of Knez Milhailova is lined with them.

I take a stroll down Knez Milhailova through the Old Town on my way to the imposing Kalemegdan Citadel which towers over the city.

Building of the citadel began in Celtic times and more than 100 battles have been waged there since. What stands today is mostly the product of 18th century Austro-Hungarian and Turkish reconstruction.

The views over the Danube to the right and Sava River to the left are worth the climb alone.

After leaving the citadel I take a walk back through the city to check out some of Belgrade’s churches and mosques. Then it’s back to the hotel and on the airport to catch my late afternoon flight.

Wrapping up 2 days in Serbia

As I walk, I reflect on the past 48 hours and how my visit to Serbia really surprised me – in a positive way.

As one of the Danubian countries, Serbia has benefited by the popularity of Danube River Cruises in recent years. Many of these riverboats make stops in both Belgrade and Novi Sad which brings in a number of tourists that otherwise may not have considered a visit to the country.

I think it will open a lot of eyes as more and more visitors experience Serbia as it is today. I know that my visit has certainly opened my eyes. I’d recommend Serbia to other travelers without hesitation. Just give Magdalena and Milan a call when you’re ready.