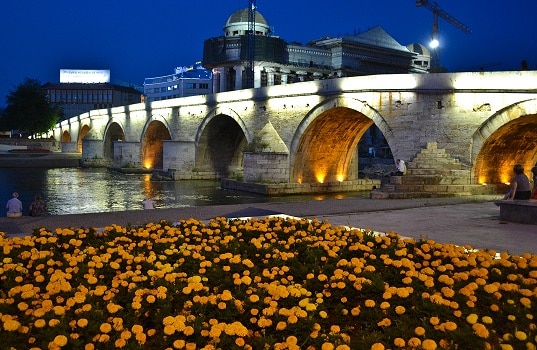 (This post was written in 2012 as a journal entry on a 30-day trip around the Balkans when the country was known as “Macedonia.” Since 2019, it is North Macedonia. I have not visited Skopje since though I’m certain it’s changed a lot. I do hope to return someday to update this information. In the meantime, just a reminder that it is definitely out of date!)

I arrived in Skopje, North Macedonia a little lighter than expected. Jat Airways forced me to check my carry-on bag and then promptly proceeded to leave it behind in Belgrade.

With a completed claim form in hand and a promise that it will be delivered to my hotel tomorrow morning (I’m certain I’ll never see it again) I catch a cab into town to check out Skopje.

When Macedonia declared independence from Yugoslavia in 1991, it was the only nation to do so without a fight.

After a quick taxi ride into town, I check into the Stone Bridge Hotel and dropped of what little stuff I have. Then, I take a stroll across the 15th century stone bridge over the Vardar River to explore a little before dark.

One, the entire downtown area is a massive construction zone. Cranes loom overhead, buildings are completely obscured behind scaffolding and piles of cobblestone rubble mark every corner. I wonder if I’ve missed a memo and Skopje had just been awarded the Olympic Games and needs to spruce the place up a bit.

The second thing it is impossible to miss about Skopje are the dozens of enormous statues scattered about.

After a little research, I discover both of these observations are directly related to the comprehensive and controversial “Skopje 2014” renovation project currently underway in the downtown area.

Older state buildings, such as the Parliament are due to get complete face-lifts, as well as new decorative features. Seventeen different monumental statues of great and historic locals, assorted intellectual heroes and an enormous statue of Alexander the Great are planned.

After a powerful earthquake in 1963, downtown Skopje was rebuilt in colorless, block concrete soviet style. Believing the city was lacking in aesthetic virtues and seeking a way to build the economy with direct investment, the government conceived the Skopje 2014 plan.

Supporters characterize the plan as the key to revitalizing the depressed city, but the program has drawn criticism both domestically and from abroad. Domestic critics say the plan is a waste of vital funds (more than 200 million euro) that would be better spent building roads and upgrading infrastructure.

One local critic said, “Only in Macedonia the people live in poverty and the authorities throw millions on splendor.”

But the program continues apace and despite the absurdity of the ubiquitous giant statues, I imagine the renovation will be quite impressive once it’s finally completed.

The next day, my suitcase actually does arrive at the hotel as promised. I pronounce it a Macedonian miracle and briefly consider buying a lottery ticket.

I spend the rest of the day wandering through the old Turkish bazaar and around the city fort of Tvrdina Kale (it is closed) before settling into a café along the modern ul Makedonija for lunch.

Later, I make a trip to the bus station to buy my overnight bus ticket to Sofia, Bulgaria for later tonight. Six hours on the overnight bus, coming up!

It was an all-too-brief stop here in Skopje. I’m sure North Macedonia has much more to offer and I hope I’ll have the opportunity to come back someday and explore more.

But for now, it’s off to Bulgaria!