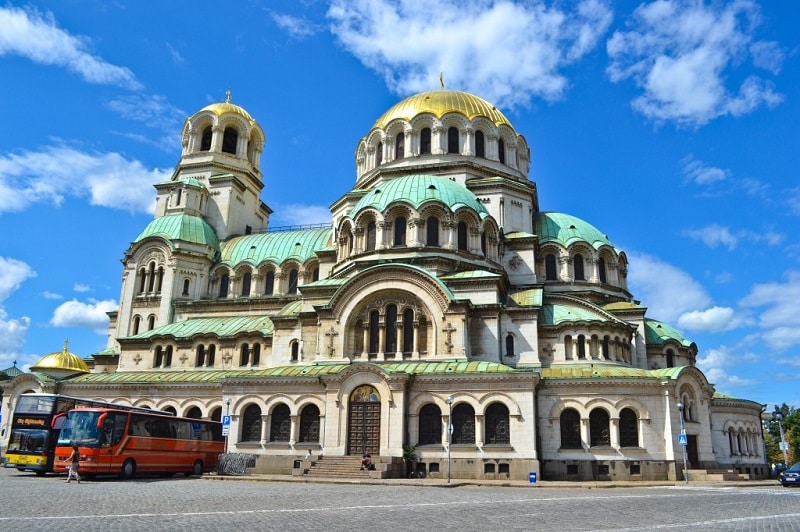 It’s 4:30am and I have just arrived at a deserted bus station in Sofia, Bulgaria.

With a 6-hour overnight bus ride from Skopje, Macedonia now blessedly behind me. I groggily catch a cab to the stately comfort of the Sofia Hotel Balkan (a Luxury Collection hotel), praying that they will be willing to check me in this early.

My frequent guest status pays off again and I am checked right into a lovely suite.

After two weeks of roughing it in the Balkans, I cannot tell you how happy I am to see this suite. The first thing I notice when I walk in (other than the cool flowing air from the A/C) is the office…complete with printer. I almost cried. I have been in serious need of a printer for a while, but it’s tough to find one around here.

Further exploration reveals fluffy towels, a robe & slippers, an expansive array of toiletries, a hairdryer, and even an iron. It was heaven, I tell you.

Sure, all of these things are standard in the average US hotel, but in the hotels I’ve been staying in across the Balkans, they were virtually non-existent.

The A/C is especially welcome as several of my hotels haven’t had it. I briefly consider spending the next 36 hours right here in this room but realize that I should probably at least get out and see a little of Sofia.

But not yet, it is after all only 5am.

I crank up the A/C as high as it would go, buried myself in the fluffy pillows and duvet, and crash. I awake four hours later, refreshed and ready to see what Sofia, Bulgaria had to offer.

Situated on the Balkan Peninsula, Bulgaria shares borders with Romania, Greece, Turkey, Macedonia and Serbia. To the east, its border on the Black Sea is lined with summer resorts. Sofia is Bulgaria’s capital and largest city with just over a million people.

Rejuvenated after my morning nap, I head out of the hotel into a perfect summer day.

Gone was the oppressive heat I’d become used to in the rest of the Balkans, replaced by a cool breeze. I start at the top with Sofia’s most famous landmark and the biggest temple on the Balkan Peninsula.

After just a short walk from the hotel, I arrived in Parliament Square and easily spot the massive, gold-domed cathedral.

Constructed between 1882 and 1912 in the neo-Byzantine style typical for Russian churches in the 19th century, it is named after a Russian tsar who saved Russia from invading Swedish troops in 1240. The interior is an artistic masterpiece of onyx and alabaster and can hold up to 7,000 people.

From there, it’s a walk through the artist’s market in the park nearby and a visit to Sofia’s oldest Eastern Orthodox Church, St. Sofia. Outside the church burns the eternal flame of the Unknown Soldier, set up in 1981 to honor the nation’s casualties of war.

I spend the rest of the day walking all over the city – past the National Theater (where I stopped to sample a delicious & inexpensive Bulgarian beer), the adorable little Russian Church, and the Baths that are currently being completely renovated.

I stop at the Presidency to watch the changing of the guard with the former Communist Party headquarters looming in the distance. My last stop is the Church of St. George, right behind my hotel, which dates all the way back to the 4th century.

All in all, it was a splendid day.

Sofia gets sort of a bum rap by the tourism industry. Even my Lonely Planet guidebook made it sound somewhat uninspiring. But I guess that’s why it’s important to see things for yourself and form your own impressions.

I found Sofia to be a lovely city with a lot of history and charm. The only thing I’s say it was lacking was a good café scene like most of the other Balkan cities. The hotels were nice, the people were friendly and everything was really cheap.

It’s big culture with a small price tag. What more do you need for a one night stay?

On another note, I realized while I was in Sofia that Bulgaria is the 100th country I’ve visited. A pretty impressive milestone if I do say so myself. It’s hard to believe I’ve been lucky enough to see so much of the world in just the 12 years since my first trip overseas.

Next up, back to Greece for a lazy weekend on the island of Corfu!