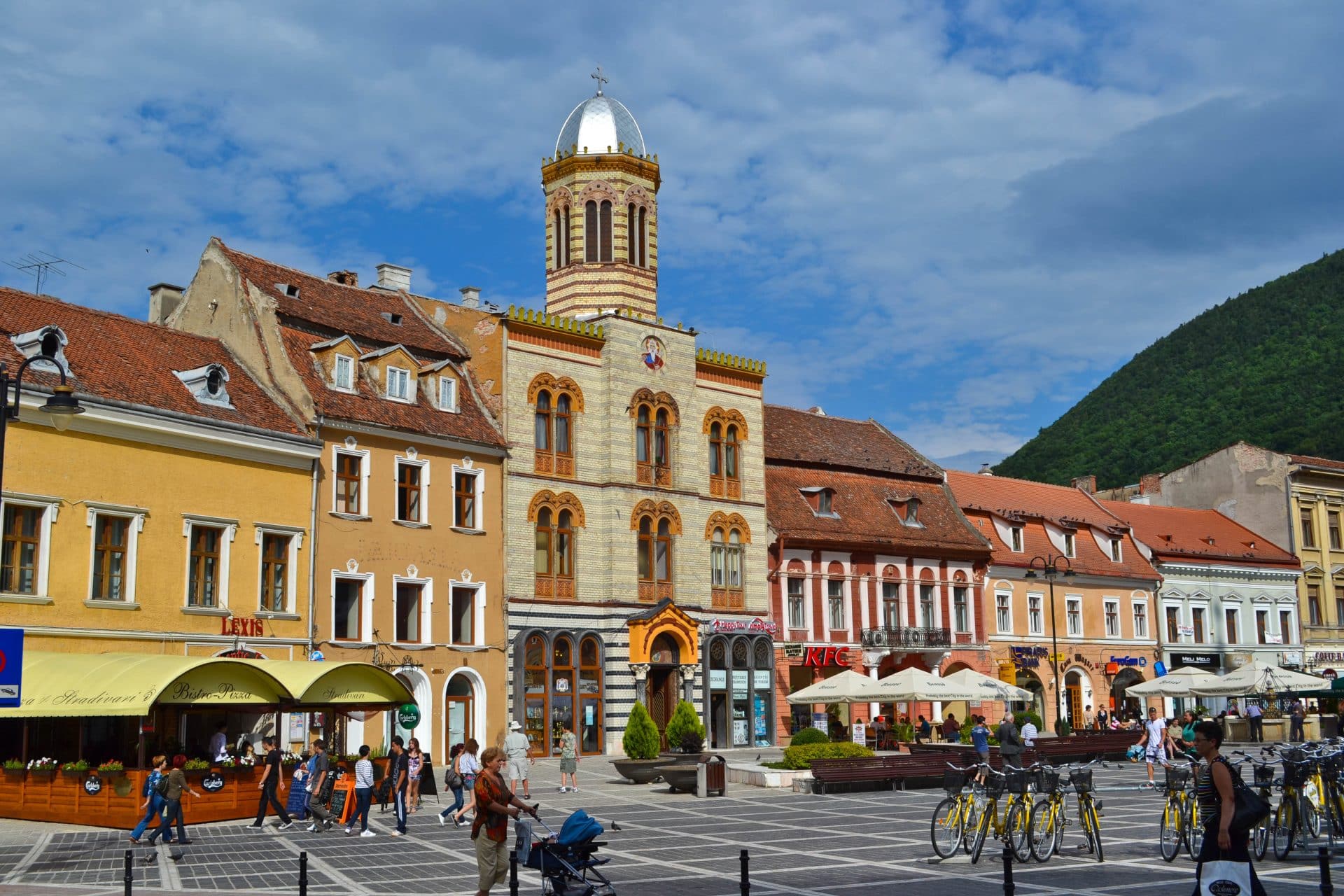 Inside: Why the medieval town of Brasov is the perfect home base to explore the Transylvania region. Plus: How to get there, where to stay and what to see.

We’re nearing the end of this 30-day trip around Eastern Europe and the Balkans, but there’s still one stop left to go…Romania! Specifically, the Transylvania region and the medieval town of Brasov.

After leaving Corfu late in the day, I flew to Bucharest where I’ll spend the night tonight before continuing on to Brasov tomorrow.

Read More: How to Visit Albania from the Greek Island of Corfu

My hotel, the Vienna House Easy Airport Hotel is lovely, reasonably-priced and just a few minutes from the Bucharest airport. After a hectic few days in Corfu and Albania, I’m exhausted by the time I get to my room.

I’m excited to get out and explore Romania.

After a great night of sleep, I’m a new woman.

I head back to the airport bright and early and catch the local bus to Bucharest’s main train station, Bucharesti Nord. The trains to Brasov leave pretty regularly but I’ve been told to avoid any train that isn’t a Rapid (R) or Inter-City (IC) – the fastest and nicest of Romanian trains.

There’s a Rapid train departing at 8:40am and I make it to the station just in time to catch it.

Since this is my first experience with Romanian trains, I play it safe and book a 1st class ticket for about $20 (2nd class was $15 so this is a no-brainer).

“Rapid” turns out to be a relative term in Romania. The train takes a little more than 3 hours to cover the 95-mile distance between Bucharest and Brasov.

But the ride through the countryside of Transylvania is totally worth it. By lunchtime, I step off the train in the charming town of Brasov.

Why Brasov is the perfect home base in Transylvania

Situated in the heart of Transylvania, Brasov is the perfect place to set up camp and explore the region. Surrounded by the peaks of the Southern Carpathian Mountains, Brasov is resplendent with baroque, gothic, and renaissance architecture.

Nowhere is that more evident than in the main Council Square, Plata Sfatului, where the city’s German heritage is evident.

The Council House, built in 1420, lies in the center of the square and was once a watchtower for approaching barbarians before becoming the decision-making center for the business of the city.

I catch a bus from the train station and easily find my hotel, the fantastically-charming Bella Muzica. Located right in Council Square in a 16th-century neoclassical style building, it’s one of the top choices in Brasov. My room is adorable and at EUR 70 a night, it’s a steal.

After dropping my bags, I head back down to the front desk to inquire about the bus to Bran Castle. With directions in hand, I’m off to the main bus station to catch the bus to Bran.

Just 45 minutes later, I arrive in Bran and the cute little town brings an instant smile to my face.

As I step off the bus, I can see Bran Castle perched high above. At ground level, I’m surrounded by a tiny village of vampire souvenirs and memorabilia. It’s total vampire kitsch but in a reasonably adorable way. From vampire fangs to vampire wine, this town has it all.

I bypass the souvenir stands and make a beeline for the castle entrance.

Situated on the border between Transylvania and Wallachia, Bran Castle is commonly referred to as “Dracula’s Castle.” Though it’s actually just one of several locations linked to the Dracula legend, it is considered to be the fictional home of Bram Stoker’s title character, Count Dracula.

Stoker based his character on the legend of Vlad Draculea, ruling prince of Wallachia in the mid-1400’s. Seems ol’ Vlad had a notorious reputation for impaling his enemies in a particularly grotesque fashion.

Though the castle itself is a bit of a letdown – I guess I just pictured it differently – the whole experience of Bran is a lot of fun.

Sometimes you just have to embrace the kitsch, you know?

On the way back to Brasov, the bus makes a stop in the town of Rasnov. I spot another incredible looking castle and decide to hop off and check it out.

It turns out to be more of a citadel or fortress than a castle but it’s actually even more impressive than Bran Castle. And without the crowds, souvenir stands, and fictional history.

Unlike most Saxon fortresses, Rasnov Fortress was originally designed as a place of refuge meant to house villagers for months at a time. Within the fortified walls are houses, a chapel and even a school. It’s a massive complex and a fascinating place to visit.

So glad I decided to get off the bus!

Once back in Brasov I spend the rest of my day exploring the small town.

One of the first things you notice is the giant “BRASOV” sign stenciled across the mountain overlooking the town. Rasnov had a very similar sign grandly announcing your arrival and I begin to wonder if Transylvania has a bit of a Hollywood complex.

The next thing you notice as you walk around Brasov are all the café umbrellas emblazoned with the following bold (yet hedged) statement, “Brasov – Probably the Best City in the World.”

Probably?  I mean, come on Brasov…either you are or you aren’t. But either way, you’ve gotta love their confidence.

And I have to say, though best city in the world may be a stretch, Brasov is without a doubt a terrific city to visit.

For my last day in Romania, I take the train back to Bucharest.

It’s another 3 ½ hour train ride, this time in 2nd class (the train I choose doesn’t have a 1st class car). The ride is fine but I quickly discover that the major difference between 1st class and 2nd class is air conditioning.

Definitely worth the extra 5 bucks on a hot summer day like today.

From the train station, I head to the historic Athenee Palace Hilton Bucharest to check-in. I drop my bags, grab a map from the concierge desk, and head off to explore Bucharest.

The main area of interest for tourists is the Old Town so I start there.

Unfortunately, there are numerous construction projects going on everywhere and many of the streets are torn up and closed off.

After some of the beautiful Old Towns I’ve seen in the past few years all over Europe, the Bucharest version is a bit of a disappointment.

The rest of the city is really just what you’d expect to see in any big city, lots of office buildings, shopping centers and traffic.

The strength of Romania as a tourist destination is definitely in its countryside. The Carpathian Mountains, Transylvania, and cities like Brasov and Bran are certainly worth a visit.

If I return to Romania someday, I will definitely spend more time exploring those areas and less time in Bucharest. But as a whole, I really enjoyed Romania. It’s a country with a rich and mysterious history and worth a stop on any Eastern European itinerary.

It’s hard to believe this trip is finally coming to an end after almost 5 weeks on the road!

Next, on to Amsterdam for one final night before heading home.

390
35
We use cookies to ensure that we give you the best experience on our website. If you continue to use this site we will assume that you are happy with it.OkPrivacy policy