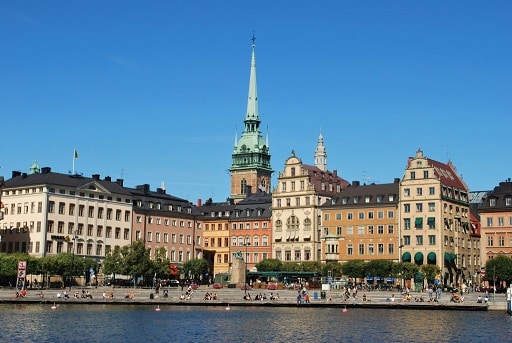 My transportation choice from Tallinn to Stockholm was a cruise ship across the Baltic Sea.

It was described as a “ferry” so I wasn’t sure what to expect from the ocean-view cabin I had booked. At $235 for the cabin, it was a little bit of a splurge but since the trip was 17 hours long, comfort won out over frugality. The check-in and boarding process were extremely easy, it took me less than a minute to check in at the window in the terminal and receive my cabin key.

I’ve only been on a cruise ship once before and it was a long time ago (senior cruise after high school) so I really had no idea what the cabins would look like. I was pleasantly surprised when I got to my cabin. It was clean, comfortable and nicely-decorated. The bathroom was, of course, small but definitely sufficient.

All in all, far more comfortable than the overnight train car Shannon and I had been on a few days before. And there was even a TV with English channels other than CNN, a nice change of pace.

After storing my luggage in my cabin, I headed up to the sun deck to check out the view. The sun deck was hopping with cruisers enjoying a frosty beverage in the afternoon sun before departure (hmm…maybe cruising IS for me after all??).

After we set sail, I wandered the ship a little to see what it had to offer. It had all of the standard cruise ship amenities: restaurants, duty-free shopping, a pub, a nightclub, a disco…the works. I also discovered (after seeing a number of passengers with their laptops out) that the ship was equipped with free WiFi. Nice!

I went back to my room, grabbed my laptop and returned to the pub area where the World Championships from Berlin were live on the big screen. There were some very enthusiastic supporters of certain athletes (or countries) competing so it was quite a raucous crowd in the pub. Not the best environment for trying to work but it was certainly entertaining.

Around 11pm, I decided to call it a night and returned to my cabin for some rest. I actually slept pretty well in my cozy little cabin and I awoke the next morning to a sea of glass and tiny islands floating by outside my window.

Talk about tranquil. I showered and packed my things and then headed down to the restaurant for breakfast.

I spent the remaining few hours at sail on one of the outer decks watching the Swedish countryside float by. What a way to travel.

When we finally docked in Stockholm Sweden at 10am, I was happy to be greeted by sunshine after two days of clouds and rain. I made it to my hotel – the lovely Sheraton Stockholm – in no time, checked-in and then hit the streets of Stockholm to see the sights.

What I hadn’t realized about Stockholm is that the city is actually comprised of 14 separate islands. The modern, city center (where my hotel was) is on the main island but the remaining sights of Stockholm are spread out on neighboring islands.

The historic Old Town of Stockholm, called Gamla Stan, is on the neighboring island to the city center. Though the web of islands makes it slightly more difficult to get around, the sparkling blue water that surrounds all parts of the city is worth the price. It is incredibly scenic.

In all of my globe-trotting days, there have been very few countries where I felt like I truly blended in. For the most part, I stick out like a tall blond in a group of Japanese (sometimes literally). But there is one surefire sign that I’m in one of those rare places where I could possibly be a local…the tourists start asking me for directions.

This has happened before in Australia and New Zealand, and once in South Africa but rarely anywhere else. I hadn’t been in Stockholm for an hour before two different people carrying maps and looking lost, stopped me to ask directions. Since I was still figuring my own way around, I probably wasn’t too helpful, but I did try.

It’s a nice change of pace to be able to explore a city camouflaged as a local. In places like Asia and, especially, the Middle East my physical characteristics are difficult to conceal and have often made me the subject of unwanted attention (specifically speaking of the Middle East here, in Asia people generally leave you alone). For once, it’s nice just to blend.

So, Swede-in-training that I am, I took the concierge’s suggestion for a lookout point on Sodermalm island to try to get my bearings and an overview of the city’s island network. The lookout spot was a huge hill with sweeping views of the other islands and was a great start to my day.

After taking a few pictures, I saw some colorful building facades off in the distance opposite the other side of the island. Figuring there had to be another look-out point on that side of the island, I made my way over there to explore.

I wandered the cobblestone streets for a while (have I mentioned my new-found hatred for cobblestone streets?) and then I hit paydirt. A tiny little obscure entrance to a trail that wound all the way along the shoreline that was not mentioned anywhere in my guidebook OR by the concierge. Jackpot. I am always so proud of myself when I find something like this. Makes me feel like I’m not just travelling at the whim of a guidebook but blazing my own trail in an unfamiliar city.

After taking some more great shots along the trail, it was time to make the long walk over to Djurgarden Island, site of the lone museum I had planned to visit in Stockholm, the Vasa Museum.

Yes, I’m sure there were numerous transportation options available to get there quickly but when you’re trying to get to know a city, the best way is to just walk it. So I did. It was about a 40 minute scenic walk to the Vasa Museum but well worth the effort.

On August 10, 1628, the flagship Vasa set sail on her maiden voyage and promptly sank in Stockholm harbor. In 1961, the wreck was salvaged from under the sea after 333 years. The vessel was painstakingly reconstructed to 95 percent of its original condition. The ship is splendidly adorned with hundreds of carved sculptures and gives great insight into the 17th century sailor’s life in Sweden.

It was a wonderful exhibit and very educational. Swedish history and culture: check!

After leaving the museum, I visited the large park on the island for more scenic city views before making the long walk back to the hotel. I spent an hour in the hotel’s club lounge checking e-mail over a glass of wine before returning to Old Town for dinner and some dusk shots of the city.

All in all, a perfect day of sightseeing in Stockholm.

Tomorrow, on to Oslo!