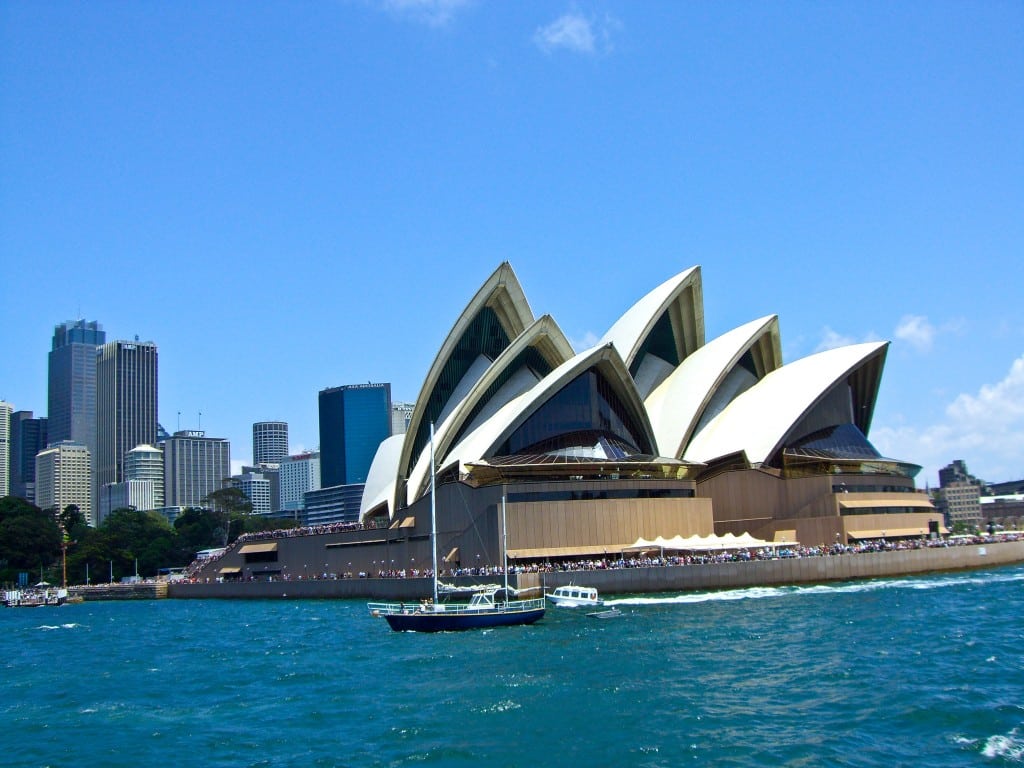 I’m happy to report that by the time I got from Shanghai to Seoul I was feeling much better.

On my flight from Seoul to Sydney, the girl sitting next to me was from Atlanta. In fact, she just bought a house in Vinings – about 3 miles from mine…small world!

Apparently, they have recently started doing guided climbs up the Harbour Bridge. It’s fairly expensive and though I was skeptical about whether it was something I wanted to do, Katie convinced me that it was a must-do while in Sydney so I checked it out when I got to the hotel.

She was obviously right about its popularity because when the concierge called to book it for me, it was completely booked up for all 3 days of my stay. Oh well. (Katie – just for the record, I tried!)  I guess the next time I come back to Sydney I’ll have to book it in advance.

When we landed in Sydney at 7:30am, the weather was gray and raining – seriously, can I get a little sunshine here??? After a long red-eye, I was pretty tired anyway so it was a good excuse to check into the hotel and take a nap.

My hotel was the Four Points Sheraton in Sydney’s Darling Harbour which had a lot of shops and restaurants so I spent some time that afternoon exploring that area. I figured I’d save my walk over to Sydney Harbour for the next day and hope for better weather.

When I awoke the next morning, the weather had indeed cleared. The sun was out and it was shaping up to be a beautiful day so I headed out of the hotel around 9am for a full day of touring Sydney. It just so happens that today is Australia Day in Sydney – the Australian equivalent of the American 4th of July.

It is summer here and everyone had the day off work for this national holiday so the Harbour was packed with locals and tourists alike.

My first stop was the famous Sydney Opera House. It looks beautiful in pictures but I must say it was amazing up close. I’m not sure how many pictures one could possibly take of this building but I’m going for the record.

The other major attraction in Sydney Harbour is the Harbour Bridge. It’s funny to see the constant stream of people climbing on the top of it. Wish I could have done that, it looks really cool up there.

With the holiday, there were a TON of boats out on the water and since that looked like a lovely way to spend a few hours, I found the ferry terminal and bought a ticket to the far beaches at Manly. Mostly, I just wanted the ferry ride through the harbour but the beach was gorgeous, too.

That night, as luck would have it, there was a huge fireworks display planned for Darling Harbour – right outside the door of my hotel. My original plan was to have some dinner down there and then find a good spot to watch the fireworks.

However, about 30,000 Australians had pretty much the same idea and by 8pm there wasn’t a single square foot of real estate to be had anywhere around the harbor. It was insanely, obnoxiously crowded. It then occurred to me that my room probably had the best view around of the fireworks.

So, I picked up some dinner to go and headed back up to the hotel. I really lucked out because my room did indeed have a fantastic view of the whole fireworks display so I enjoyed the show and then called it a night.

For my last day in Sydney, my plan was to check out the famous Bondi Beach.  Luckily, the weather cooperated again and the sun was out. Getting to Bondi Beach from downtown Sydney takes a little doing but one train and a 3-mile walk later, I was there (there were easier ways, but hey, I like to walk).

Bondi is a huge beach and was very crowded even at 10am when I got there. I found a good spot and settled in for a while enjoying the atmosphere. Later, I took a bus back to Sydney Harbour for one last lunch with a view of the Opera House and headed back to the hotel to shower and pack for my 6pm flight to Wellington, New Zealand.

My friend and fellow ESPN crew member, Kay, just finished 3 weeks of working on the Australian Open and is meeting me in New Zealand later tonight. We’ll be spending the next 4 days touring the country together.

Sydney was great but I’m ready to move on. It is nice to be back in a place where I blend in with a crowd again, though. So much so, that people kept asking me for directions on the street. Occasionally, I was even able to help!