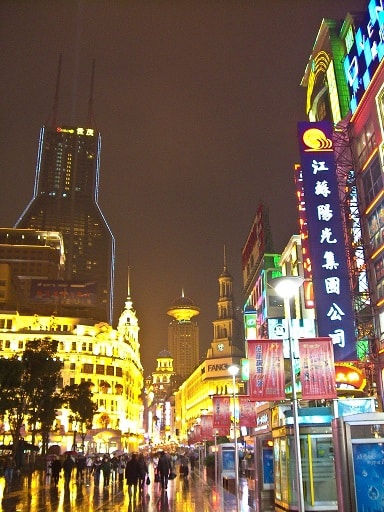 I should start by warning you that this entry of Round the World #2 will not be particularly exciting.

On the overnight flight from Bangkok to Seoul, I started to feel like I was coming down with a cold. By the time I landed the next morning in China, I was definitely feeling lousy.

Now, China is not the best place to land when you’re sick as you have to fill out a health card upon landing so they can establish that you don’t have the bird flu.

Fortunately, I was pretty sure I didn’t have a fever (they can quarantine you at the airport if you do) so I bluffed my way through the health card and breezed through immigration and customs.

Next came the most exciting part of my stay in Shanghai, riding the “World’s Fastest Train” into town.

Named after the “magnetic levitation” technology that it employs, Shanghai’s Maglev Train began full operation in March 2004, covering the 20 miles from Pudong International Airport to the outskirts of the city in a blistering 7 minutes and 20 seconds and reaching a top speed of 270 miles per hour.

Because the train is not attached to a track, when it glides around a curve it actually tilts like you were on a surfboard or something. Very much like a ride at Disney World and definitely a rush.

The Maglev Train stops at the Longyang Station and from there you can switch to the Shanghai Metro. I had a rough idea of where my hotel was located so I bought a ticket for the metro and got off at what I thought would be the closest stop.

It wasn’t, but I still managed to find the hotel after a little walking around. The weather was cold and overcast and I was feeling worse by the minute so when I finally got to the hotel, I convinced myself that I should probably just get in bed and hope for better weather the next day.

My hotel was the Royal Meridien Shanghai, a brand new addition to the Marriott chain. It was fantastic and when I arrived they had already upgraded me to a very nice suite on the 62nd floor with a great view. I took a hot shower and some cold medicine and went to bed.

When I awoke the next morning, the magnificent view outside my window was completely obscured by a thick fog. This seemed like a good excuse to stay in bed a little longer so I did. I finally got up around 10am and went up to the concierge lounge for breakfast.

Then, despite my current health state, I motivated myself to leave the hotel and explore the city a little since this was really my only full day in Shanghai. Unfortunately, the weather was still not cooperating – thankfully, there was an umbrella in my room. I spent a few hours touring around Shanghai in the freezing rain which was only making me feel worse.

I walked over to the People’s Square (Shanghai’s only ‘Ode to Communism’ that I saw – much different from Beijing where communism is in evidence everywhere) and then down to the Bund area at the river’s edge.

The Bund was really nice and I imagine it would be a great place to spend some time in better weather. After that, I took a long walk down Nanjing Road, Shanghai’s main shopping street.

By early evening I’d had enough and was disappointed that the weather never improved. I went to bed and set my alarm for 7am hoping that maybe the weather would be better in the morning and I could go out and take some better pictures.

But I woke up to the same fog so I am sad to say that this is the first city I’ve been to where the weather didn’t cooperate with me at least one day of my stay.

I got the impression that I would have liked Shanghai if I’d been able to see more of it. It was definitely a lot different from Beijing, much more like a modern, New York-style city. I did enjoy the ride back to the airport on the Maglev and I was feeling a little better by then.

So happy I’ve got three warm destinations left to look forward to on this trip.