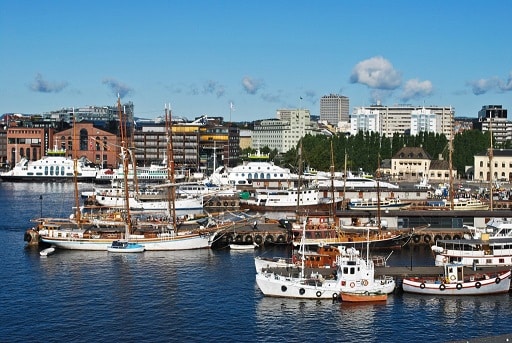 Had I spent a little more time researching Norway, I might have uncovered the useful fact that it is universally acknowledged as the world’s most expensive country. Not exactly what you need when you’ve already been on the road for 3 weeks and feel like you’ve been doing nothing but spending money.

It’s the kind of place where, like Tahiti earlier this year, a sandwich on any restaurant menu will run you $25 bucks. And God help you if you want to try a real restaurant. At this point in my journey, Norway is not in the budget. But, I had 48 hours in Oslo and I knew I could figure out how to make it more budget-friendly.

Getting to Oslo was the easy part. I had booked my 6-hour train ride from Stockholm before leaving the States. Since it was such a long ride, I went with first class (which didn’t cost much more than coach and was well worth it). The ride was very scenic and I was able to get a ton of work done.

A Budget-Friendly Hotel in Oslo

The hotel I had reserved in Oslo was the lone steal of my stay here. Since there were no hotels in Oslo where I could use my points, I had to go to my “Plan B” hotel selection method – a combination of Booking.com (for price) and Trip Advisor (for reviews).

I decided on the Thon Hotel Astoria. Thon is a chain of hotels in Norway and they had several properties in Oslo. I chose the Astoria because it looked like the best location and it was fairly new.

When I got off the train and stepped outside the station into the chaotic center of Oslo, I was reminded why I love travelling like this. Every day brings another country or another city and a new challenge. When I walk out of a foreign airport or train station, it’s a feeling of disoriented exhilaration…I don’t know exactly where I am, but I know I can (usually) figure it out.

And figure it out I did. In fact, this particular hotel was the easiest yet to find. It was literally 2 blocks from the main train station and close to everything I wanted to see while in Oslo. Check-in was quick and I was up to my room just minutes after getting off the train.

The room was mostly what I expected; VERY small but comfortable enough (even a flat screen TV which was a nice touch). It was hardly any bigger than the cabin I’d had on the ship 2 nights before.

After dropping my things in my room, I went back down to the front desk to get a map and a little advice about what to see during my short stay in Oslo. I did have a guidebook with me and I’d scoped out a few things I knew I wanted to see, but I always like to get a little advice from a local. The front desk clerk suggested a few things, some I’d planned on and others I hadn’t, and I headed out.

My first stop was Vigeland Park, a “maybe” on my list but a must see according to the front desk agent. It was further out than everything else I wanted to see so I figured I’d knock it out first.

The sculpture park showcases the work of famed Norwegian sculptor, Gustav Vigeland. The park was lined with more than 200 granite and bronze works displaying the human form in a range of emotions. Definitely interesting and worth the walk.

Next on my list was the Royal Palace. It was also surrounded by a lovely park but not quite as exciting as I’d hoped. I think I’m getting spoiled by all of the amazing palaces I’ve seen on this trip. Time to move on…

The main thing I wanted to see, and my final stop for the day, was the waterfront and harbor area called Aker Brygge. Unfortunately, the weather was not cooperating with me today and it was mostly overcast (though, thankfully, not raining).

The waterfront area was awesome, full of yachts and sailboats and lined with bars, restaurants and cafes, and actually reminded me a lot of the harbor area in Auckland, New Zealand . And it was a lively area on a Friday evening so I hung out for a while to take in the view.

The next day I set the alarm early in the hopes that the sun would be shining and I could get some better pictures around town. Luck was with me and I awoke to sunny skies.

For the second half of my 48 hours in Oslo, I started with an early morning walk over to the Opera House first (also on my list) and then wandered along the waterfront past the cruise ship port and the Ankershus Festning fortress.

I hiked up to the top of the fortress for what I hoped would be amazing views of the harbor – and I was not disappointed.

It was a gorgeous sunny morning and the impossibly blue water extended in every direction as far as the eye could see. Cruise ships, fishing boats, sightseeing boats and sailboats dotted the expanse of blue sea.

Finally, I realized it was almost time to pack up, check out and head to the airport yet again so I walked back down to Aker Brygge to get a few more pictures before heading to the train station to catch my train. The train to the airport was quick and efficient but also the most expensive airport train/bus I’ve ever taken at $30 US!

Oh well, what can you do when you’re in the most expensive country in the world and you need to get to the airport? You suck it up and fork over your AMEX. All in all, it was an excellent 48 hours in Oslo!