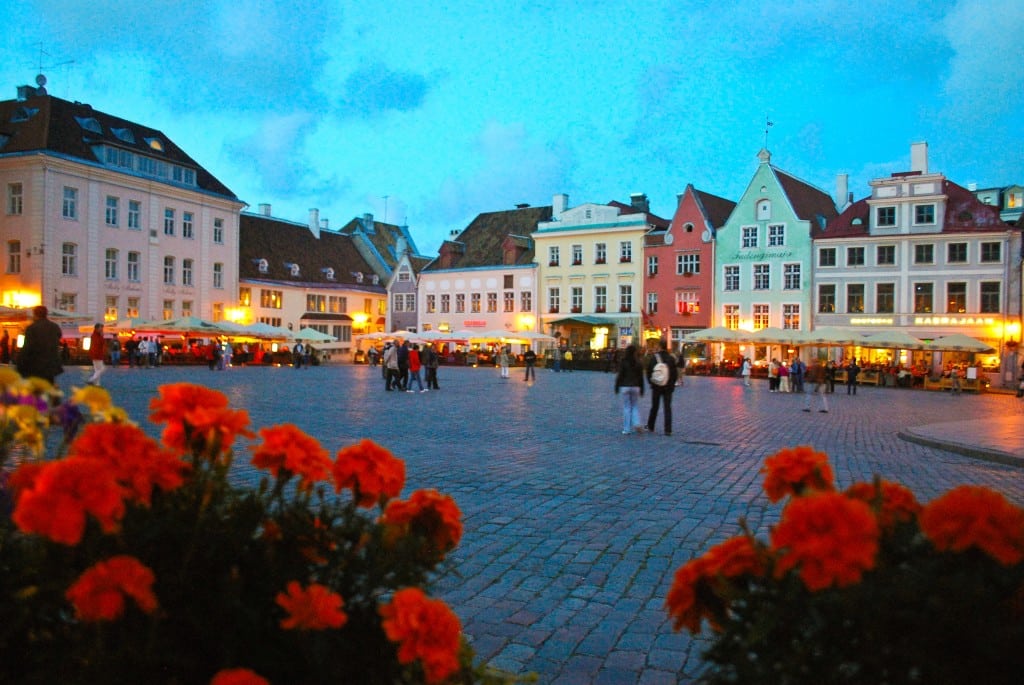 The 90 minute high-speed (hydrofoil) ferry ride from Helsinki across the Gulf of Finland was smooth and very pleasant. As we neared the coastline of Estonia, I could easily make out the cathedral spires of Old Town.

When the ferry docked, I decided to employ my usual strategy of finding my hotel; “it’s a tall building, how hard could it be to find?” My hotel for the night was the gleaming Swissotel Tallinn.

Built in 2007, it is one of Tallin’s best offerings in luxury accommodation. Since Tallinn is quite small and very easy to navigate on foot thanks to helpful directional signs, I found the hotel after about 20 minutes with no problems at all.

I had decided to spend the night in Tallinn, instead of doing just a day trip from Helsinki, because the hotel rates in Estonia were much more favorable than those in Finland. So, I planned to split my two nights in the area with one night in each city. I chose the Swissotel because it was one of the most modern options and the price was definitely right at just over $100/night.

It turned out to be a great choice. The hotel was beautifully trendy and the rooms were spacious and well-appointed, with free WiFi throughout (the norm in Tallinn). I also found the staff to be very friendly and knowledgeable about the area – a big plus when you’re short on time and don’t want to miss anything.

After settling in and checking e-mail, I grabbed my camera and headed out to explore the Old Town. Now, since all of the “Old Towns” I’ve seen on this trip are starting to run together, I was in search of something different in Tallinn, something to make it stand out in my memory.

I found exactly what I was looking for when I caught a glimpse of the onion domes of the St. Alexander Nevsky Cathedral peeking above the walls of the city.

Built in 1894 as a symbol of Russian power over Estonia, this orthodox cathedral is unlike anything I’ve ever seen before (since, of course, I have not been to Russia). Sitting majestically atop Toompea Hill, the cathedral’s Russian Orthodox architecture is stunning from its pink-stoned walls to its black onion domes.

There was a service in progress but I snuck in the back for a quick look inside. Marvelous. I walked around the cathedral 3 or 4 times taking pictures before finally moving on.

The sun was just beginning to set as I arrived at the town square, Raekoja plats. Though much smaller than some of the town squares I’ve seen recently, it was charmingly Gothic. In fact, the square is dominated by the only surviving Gothic town hall in Northern Europe, constructed in the early 14th century.

Ringed by pastel-colored buildings dating to the 15th – 17th centuries, and filled with restaurant workers donned in medieval garb, it was like stepping into the middle ages.

I sat down at an outside patio on the square for dinner at an Estonian restaurant recommended by the concierge at the Swissotel. Since I had no experience whatsoever with Estonian food, I left it up to my waitress to make some suggestions.

I decided to go with a traditional Estonian dish served at Christmas time – yes, I know it’s August but it sounded much better than the other options she suggested. And it was actually quite good.

After dinner, dusk was just settling in so it was time to take the required “Old Town at dusk” photos. I wandered through the streets getting picture after picture as the light faded.

The next morning, the weather was looking a bit cloudy but I was determined to get out and see more of Old Town Tallinn in the daylight. My plan was to find a good birds-eye view to get a look at the town from above.

The best place to do that was the observation deck of St. Olaf’s Church. The first written records of the church date from 1267 and when the tower was built at 159m (or 522ft) it was, for a time, the tallest building in Europe.

It certainly feels like the tallest building in Europe as I make the arduous climb up a confined, spiral, stone stairway with no ventilation whatsoever and only a rope along the wall to help steady you.

By the time I finally reach the top and step out onto the narrow viewing platform, I have to stop for a minute to enjoy the cool blast of air that greets me. I quickly recover when I get my first look at the panoramic view of the town and the ocean in the distance. The view was absolutely worth the climb.

The viewing platform around the top is incredibly narrow and only allows room for one person at a time, passing is tricky and not recommended. The direction of your visit goes only one-way, single-file around the tower but as you slowly make your way around, you get an incredible view in every direction.

I made two trips around before descending the spiral stairway all the way back down.

With the rest of my day in Tallinn, I wanted to learn more about Estonia’s rocky history and ultimate regaining of independence. The nearby Museum of Occupation & Fight for Freedom detailed Estonia’s early battle with Russian occupation and seemed like the perfect place to get a little historic perspective.

Germany took over during WWII and occupied Estonia for 3 years up until 1944. When the Germans eventually retreated, Estonia’s re-declared sovereignty lasted for all of 4 days before Russian troops re-invaded and resumed occupation. In 1991, Estonian independence was finally restored after the fall of the Soviet Union.

It seems Estonia has rebounded from years of Soviet rule at an astonishing rate. Today’s Tallinn is a vibrant, hi-tech city with a lovingly-maintained, rich medieval heritage. A truly delightful place to visit and I’m glad I made room for it on my Scandinavian itinerary.

Tonight, I’ll be boarding an overnight ferry across the Baltic to Stockholm!