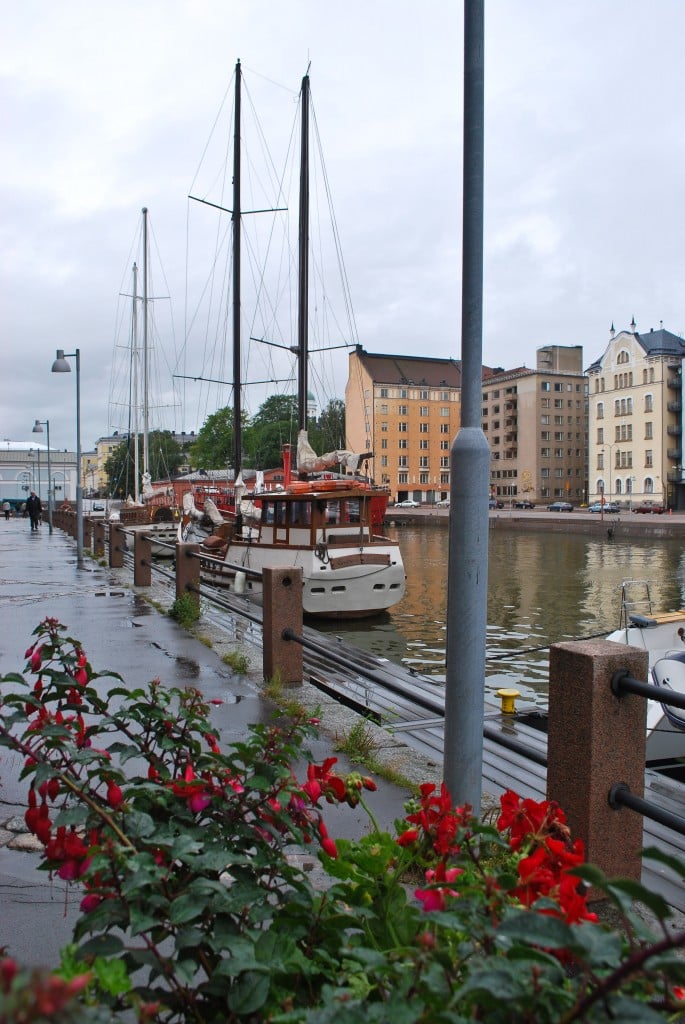 Unfortunately, by the time I got around to booking it, the flight had gone up to more then $600! So, I had to get creative with my flights which involved a train ride from Prague and then a connecting flight into Helsinki. It save me more than $450 but it meant I didn’t arrive in Helsinki until late that night.

After a long travel day, I finally landed in Helsinki at 11pm. At this time of the night, I don’t generally fool with public transportation so I grabbed a cab outside the terminal and was at the swanky Hotel Kamp before midnight.

The famed Hotel Kamp is a Luxury Collection property, so luckily I was able to use a combination of cash and points for my one night stay. Otherwise, this hotel would have been a serious budget-buster.

The hotel was beautiful and my “Executive Room” was lovely. I sweet-talked the front desk guy into giving me the wi-fi code to use from my room, bought a glass of wine in the bar and headed upstairs to get a little work done. My work e-mails had been piling up all day and though it was after midnight here, it was still business hours back in the States.

I finally turned in around 2am and set the alarm for 7am so I could make the most of my one day in Helsinki.

Sadly, the weather did not cooperate. I awoke at 7am to a steady rain outside my 8th floor windows. Since nobody wants to be a tourist in the rain, I rolled over and went back to sleep. I woke up again at 9am and it was still raining.

Time to go be a tourist in the rain.

A Rainy Stroll thru Helsinki

Thankfully, fine hotel that it is, the Hotel Kamp provides umbrellas in every room. So, I grabbed my umbrella and headed out into the rain. My first stop was the ferry terminal to book my ticket to Tallinn, Estonia for later that day. I was hoping for a 5pm or 6pm ferry but the only options were 4pm or 8pm, so I booked the 4pm. That left me about 6 hours to see the rest of Helsinki.

From the ferry terminal, I went next door to the Kauppahalli central market to see what a Finnish market had to offer and to get some breakfast. It was much smaller than most of the big city central markets I’ve seen but there were lots of interesting food choices.

I wanted to branch out and try something different so I opted for a type of sandwich called “lihis.” There were several options including (yikes!) reindeer, but I went with the safer kebab. It was actually quite tasty though I remained a bit unsettled about the “Rudolph” option.

Next up, a walk over to the harbor and a visit to the Russian Orthodox Uspensky Cathedral on Katajanokka Island. The harbor was bursting with yachts and sailboats (none of which were sailing on a lousy day like today) and it made for a beautiful view against the colorful buildings lining the shore.

On my way to my final stop for the day, I stumbled upon a lively outdoor market that was packed full of shoppers despite the inclement weather. They had some nice souvenir options so I did a little shopping (very little…luggage space is at a premium, you know!).

From there I walked through Esplanade Park to my destination, the Tuomiokirkko Cathedral and Helsinki’s majestic central square.

The square was built in 1852 and modeled after St. Petersburg’s central square. It was enormous – and full of tour buses. So, I made quick visit, took some pictures and headed back to the hotel.

It was time to pack up (again) and head for the ferry terminal…Estonia awaits!