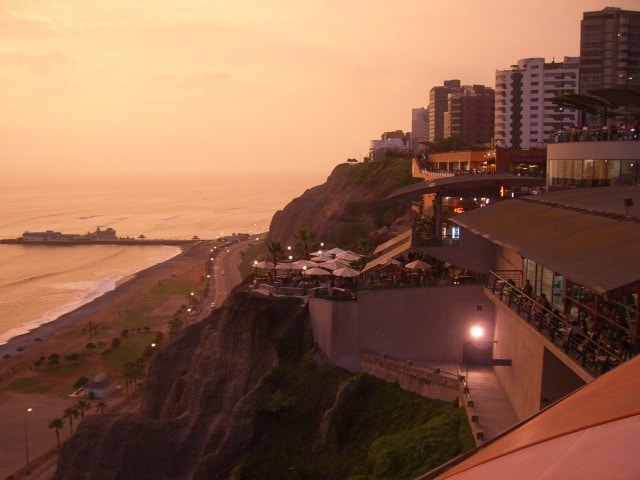 The next morning I slept in a little for the first time since my arrival in Peru. When I got up around 8am I felt like I had run a marathon the previous day after hiking Machu Picchu Mountain. I had a few hours to kill before my 3pm flight to Lima so I spent it hobbling around Cuzco one last time.

My flight from Cuzco to Lima Peru was uneventful and I got to the JW Marriott Lima around 5pm. The hotel was beautiful and right across from the beach in the upscale Miraflores neighborhood. It was great to be back in a nice big hotel with a huge bed and hi-speed internet access.

I dropped my bags in my room and headed across the street to the Larcomar Center on the beach to find a restaurant for dinner.

While at dinner I met Javier, a tax lawyer for the Peruvian government who lives in the neighborhood. He was with his sister and her boyfriend who were going out dancing after dinner in the Barranco neighborhood just down the beach and invited me to come along. I accepted and we all had a ball dancing the night away at a salsa club.

The next day the weather was lousy so I took advantage of the morning to catch up on some sleep. I spent a little time checking out Lima that afternoon and quickly realized there wasn’t much I wanted to see and before long it was time to head to the airport again.

My business-class flight on KLM that night was less than impressive. It was an old A330 plane without laptop power ports or power seats. The food wasn’t great either but the worst part was the stopover in Bonaire (an island off the coast of Venezuela) at 2:00am. We took off from Lima at 9:30pm and 4 1/2 hours later we landed in Bonaire and everyone had to get off the plane while they changed crews, fueled and cleaned the plane. After an hour in the airport, which consisted of one room with enough seats for about half the people on the flight, we re-boarded the plane at 3:00am for the continuing flight to Amsterdam.

The only thing I did like about KLM was that they give their business class passengers a cute little gift at the end of the flight. You get to choose a miniature model of one of the old Dutch houses along the canals in Amsterdam and other old-age towns in Holland. They are each numbered 1 thru 87 (one for each year KLM has been in business and they give you a book showing where your particular house is located. I thought that was a really cute idea. It almost made up for the lousy seats and the hour-long stop. Almost.

We finally arrived in Amsterdam at 5:30pm that evening. Then I caught a quick flight to Paris for the night. When I landed in Paris at about 8pm, I took the train into town, checked in to my hotel, changed and headed over to McBride’s (my home-away-from-home in Paris) to see the gang. It was great to be back in Paris where I know my way around both the airport and the city. After Atlanta, Paris is definitely the city where I feel most at home.

When I got to McBride’s it turned out that my timing was great because they were in the middle of a going away party for Aidan – one of the bartenders I have known for a few years. He was moving back to Ireland and I’m glad I got to see him before he left. I just love going to McBride’s, even though I hadn’t been there for a year, it’s always like I never left. Not to mention that none of the guys will accept any money from me so my drinks are always on the house – you gotta love that!

Tomorrow – on to Croatia!