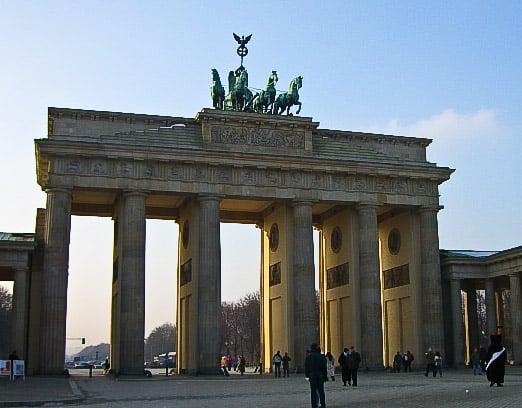 Central Europe in January? Yeah, that was a brilliant idea.

Before I move on to my day in Berlin, I must take a moment to gush about the overnight flight from Buenos Aires to Paris on Air France.

Most of you know I booked my RTW ticket with Delta’s Skyteam by cashing in my miles for a First Class ticket. (In the spirit of the “once in a lifetime trip” theory).  For the first two weeks of my trip almost all of my flights are on Delta partner Air France.

This means I will be spending a lot of time in Paris at Charles de Gaulle airport with connections (like this afternoon’s connection to Berlin). I have flown Air France in business class before but never in first. So, let me tell you about my experience on my 14 ½ hour flight last night…

When I got to the cabin there were only two rows in the 2-1-2 configuration for a total of 10 seats. I found my seat and was greeted by the flight attendant who took my coat, sized me up and returned a moment later with a set of Christian Lacroix pajamas in a size “medium” (good move by him) for me to change into.

He also pointed out the slippers and toiletry kit already tucked neatly in the storage compartment in front of me. After takeoff, they served a fabulous dinner (I had the lobster and scallops) and then everyone settled in to get some sleep.

At this point, I decided to go ahead and change into the pajamas (some people changed before takeoff but I needed a little more time to adjust to the fact that we were all going to be hanging out in pajamas…together. It’s not just me, that’s a little weird right??). So, I went into what was the largest bathroom I’ve ever seen on an airplane and changed. When I came out, my seat had been magically transformed into a flat bed with a down pillow and comforter…score!!

For the first time in my life, I slept like a baby on that plane until about an hour before we landed in Paris. All in all, it was a lovely flight and knowing that I have 4 more such flights ahead makes this trip even better – at least I know I’ll get some sleep on those overnights.

I quickly snapped out of my first class bliss when I got to the gate for the Berlin flight and my friends Gary and Theresa weren’t there. Theresa works for Delta and can fly for free so she and her husband Gary got into the RTW trip experience and planned to meet me for a weekend of revelry in Berlin.

They were scheduled to arrive in Paris several hours before me so when I got to the gate this afternoon and they weren’t there, I knew something was amiss. I turned on my phone and checked my e-mail and sure enough  – a message from Theresa to say that despite their attempts to get out on any flight anywhere in Europe at the Atlanta airport last night, they struck out on all counts and the flights for tonight didn’t look any better.

This was a HUGE bummer for 2 reasons:

1. I was really looking forward to seeing the sights with them and hadn’t really done much research on what I wanted to see in Berlin.

2. In my packing desperation, it had occurred to me that the only time I would need winter clothes prior to the last week of my trip was Berlin.

Therefore, it didn’t make much sense to lug heavy sweaters, etc in my already tiny bag when I could just pick up a few things in Hong Kong on my way to Beijing, Tokyo and Seoul. So, following this logic, I had given Theresa some of my warmer clothes to bring over and take back with them. Honestly, this seemed like a brilliant idea at the time – none of us even gave it a thought that they wouldn’t make it on a flight.

Suffice it to say, I am in Berlin (where the Captain on my flight gave a celsius temperature upon landing that was preceded by a minus sign) with little in the way of warm clothes. Although, thankfully I do have my big warm jacket and a scarf, and I imagine you’ll be seeing a lot of both in my pictures from Berlin.

In the beginning, Berlin was not at the top of my “must-see” list.  Basically, it was a logistical decision. I needed a stop in Europe somewhere along the way to cut down on flight times and since this trip is all about places that are new to me, it had to be somewhere I’d never been.

I originally looked at Prague or Istanbul or maybe Vienna but I couldn’t get the flights worked out so I eventually settled on Berlin. Which seemed like a good idea, especially after my friend Simon in Amsterdam said he’d take the train over to join me if he could get a few days off work and then Gary and Theresa decided they’d come along too.

Well, Simon, unfortunately, couldn’t get the time off work so he’s reading this along with the rest of you and of course, you know what happened to Gary & Theresa. So, as luck would have it, I’ve got a full day to tackle Berlin on my own.

After going to bed fairly early the night before I awoke early and decided to get my bearings in this city with a quick morning run (look at me, running around the world!). I layered as many items of clothing as I thought I could get away with without looking totally ridiculous and headed out.

In retrospect, I should have given this idea more consideration, it was REALLY cold and I didn’t last long before returning to the hotel for a hot shower.

When I headed out again for a day of sightseeing, my first stop was the famous Brandenburg Gate. Modeled after the entrance to the Acropolis, it was once sealed off behind the Berlin wall in what was known as East Berlin during the cold war.  During the allied bombings, the statue on the top of the monument was destroyed. In the 60’s the original molds were found and it was fully restored and is now the primary tourist spot here.

The newest addition to the area surrounding the gate is the “Memorial to the Murdered Jews of Europe”.  Completed last May, the memorial consists of 2,711 concrete “stelae” – a massive collection of blocks gradually emerging from the ground. It gives the feeling of a large cemetery, though apparently the artist did not intend it to be interpreted as such. I took a few pictures, you be the judge.

Next, I continued along the path where the wall once stood until I reached Potsdamer Platz, a lively square with a Winter Festival going on including a large snow ramp providing endless entertainment for kids with tubes. Near that square are some of the few remaining sections of the Berlin wall, protected behind a large fence.

This particular section is so unassuming that I passed it by on first glance thinking there must be a larger portion to see somewhere. (I know it looks colorful and hard to miss in the pictures but trust me, from across the street, you can miss it.) You can still trace the path of the wall through the city and several sections remain standing in memory of the way things used to be in Berlin.

Following the World War II theme, I next headed over to Checkpoint Charlie.  This allied military post marked the border between East and West Berlin all the way up until July 1990. The actual post and the “you are now leaving the American sector” sign have been removed and placed in the nearby museum but replicas remain.

At this point in my tour, I can no longer feel my extremities and my lips are a shade of blue normally reserved for Smurfs. Though I thought I was dressed as warmly as possible when I left the hotel, I don’t think I even own clothes that would allow me to be wandering around outside for several hours in 20-something degree weather. I decide to take in one last sight and call it a day.

So, for my last stop, I head to the Reichstag Dome. The dome was completed in 1999 and allows visitors to literally look in on the activities of their politicians in Reichstag below. It also has great views of the city…and more importantly, it was warm. Though it was only a little after 4pm, it was already getting dark. Not much daylight in the city this time of year, the sun didn’t come up until after 8 this morning.

A big change from Buenos Aires where the sun came up at 6am and didn’t go down until almost 8pm. So, it was back to the hotel for me and time to thaw out. My flight doesn’t leave until tomorrow evening so I’ve still got time for wandering tomorrow.

Still Freezing in Berlin – This morning all I could rally for was a little shopping and a brief stroll around town. It is simply too cold for humans to be outside. Now I am spending a little time at the hotel updating the website before heading off to the airport to catch my flight back to Paris and then another Air France overnight flight to Johannesburg. Tomorrow morning I will wake up in South Africa…where thankfully, it is warm.

I thought it might be fun to try to keep track of some of the stats from the trip, so here’s what I’ve got so far: