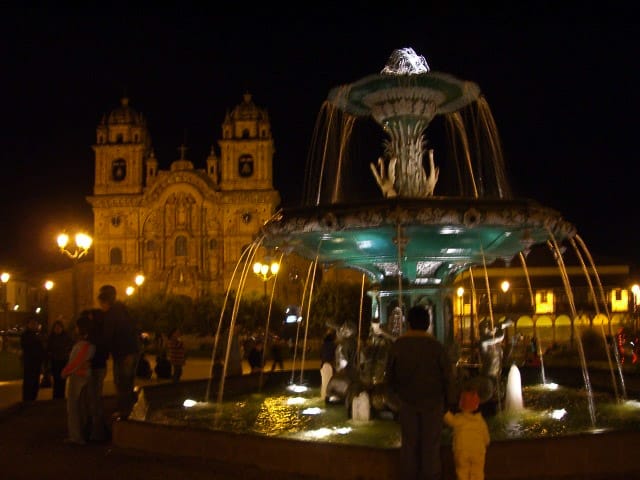 It’s the first stop on Round-the-World #2 so obviously that means no sleep on the plane on the 7-hour flight down. We landed in Lima around midnight and my night began to look up when I saw that the Lima airport was very modern, clean and had wireless internet throughout. Score!

This was especially important since I had decided not to book a hotel in Lima for the night. My flight to Cuzco Peru was at 6:00am and I couldn’t see spending the money on a hotel for 3 hours or so of sleep – not to mention I ran out of time to try to find one.

So, I found a corner table in a little café, bought a wireless internet access card, ordered a glass of wine and spent the next few hours on my laptop updating the website and trying to find hotels in New Zealand – which I am starting to wish I had found the time to do pre-departure. All in all, it ranks as my best overnight experience in an airport (though admittedly, there was not a ton of competition for that title).

My flight to Cuzco left right on time and was a quick 50 minutes in the air. When you get off the plane in Cuzco, the altitude hits you almost immediately.

Cuzco’s altitude is 11,000 feet (compare that to Denver at 5,280). I had actually forgotten about it until I was walking through the airport and began to feel my heart beating a little more rapidly than usual. Other than that and a slight shortness of breath, it didn’t bother me too much.

As I exited the tiny Cuzco airport, I was happy to see the driver from my hotel (the Torre Dorada) holding a sign with my name on it. He gave me a hearty welcome to Cuzco and cheerfully introduced himself as Oscar, Peggy’s brother (Peggy is the owner of the hotel who I have been e-mailing with over the past two weeks).

Oscar asked me if I spoke Spanish and I said “very little.” He laughed and said, “my English is catastrophic!!” (I swear to God – his words, not mine). Of all the English words he could have learned, he knows “catastrophic?” Hysterical.

Despite the obvious language disparity, Oscar was anxious to converse on the drive to the hotel so I gave it my best shot. Hey, if he was willing to try, so was I.

In the 10 minute drive I managed to ascertain that Peggy was currently in Geneva on vacation but her sister Rosemarie was waiting for me at the hotel and she spoke very good English (I knew this was true since I had e-mailed with her as well) and that he would be my driver for wherever I wanted to go during my stay. This was especially important since the hotel was a little outside of town.

We arrived at Torre Dorada and I was happy to see that the #1 rating it has on Trip Advisor was well-deserved. Rosemarie was extremely helpful in booking my train & bus to Machu Picchu for the following day and in getting me a room in Machu Picchu town for that night – two things that Peggy had told me could wait until I arrived since it’s low season. She also let me know that they had oxygen available if the altitude was a problem for me (now there’s something you don’t usually get at a hotel).

The hotel has 3 floors, each with 4 sleeping rooms with private baths surrounding an open living room area. Rosemarie showed me to my room and, though it was small, it was extremely clean and nicely decorated. Not too shabby for just $40 a night, including breakfast and transportation.

She offered me some coca tea to help with the altitude adjustment which I did accept. I had been told not to plan anything strenuous for my first day at this altitude, to just rest and give your body time to adjust. (Actually, according to my guide book, you are supposed to give yourself up to two weeks to fully acclimate before planning any major activities – but honestly, who has that kind of time?)  So, since I hadn’t been to bed yet, I opted to sleep for a few hours before heading into town – after all, it was still only 7:30am.

I woke up around 1pm and Oscar drove me into town – again the drive was full of the kind of lively conversation only two people who don’t speak the same language can have. You’ve gotta love this guy.

I wandered around the Plaza de Armas (Cuzco’s main square) for a while before finding a restaurant with a nice balcony overlooking it for lunch. I wasn’t bothered by the altitude at all except when I tried to climb stairs. It is an odd feeling to get winded after a single flight of stairs.

After lunch I resumed my wandering around until the pouring rain started.  January is summer in South America and in Peru this means the rainy season.

And as Oscar repeatedly told me on our drives, the weather in Cuzco “es loco.” One minute it’s sunny and the next it’s raining, often both at the same time. I agree Oscar…”es loco” indeed.

So I ducked into an Irish Bar (billed on the sign as the highest Irish Bar in the world – I am obviously impressed) off the square and tried to wait out the rain for a while over a Guiness. Unfortunately, the rain had more staying power than I did so after spending a little time shopping on the square, I called Oscar at the hotel for a ride back.

He was there to get me in a flash. I figured I should get a good night’s sleep since I had to be in the hotel lobby at 5:30am to drive to the train station and catch my 6am train to Machu Picchu.