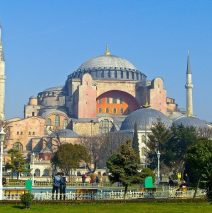 To say that Istanbul Turkey is a city rich in history would be a bit of an understatement. Formerly Constantinople, and cradle to the Ottoman Empire, it was founded 667 years before Christ and is the only city in the world built on two continents. 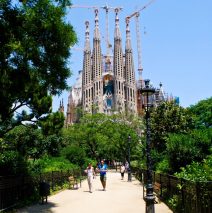 This morning I got up super early in Lisbon to get on the road and head back to Spain in search of the Rock of Gibraltar and the famous Costa del Sol. The drive wasn’t bad and I entered the UK territory of Gibraltar (known as “The Rock”) about 4 hours after leaving Lisbon. The very British Gibraltar is only a little over two square miles in size, but it’s been a big thorn in the side of Spain for a long time (the border was closed from 1969 to 1985). It’s been under British rule since the early 1700’s and the residents of Gibraltar have, in very large numbers, repeatedly voted to remain British. Because of its strategic location at the point where the Atlantic Ocean and Mediterranean Sea meet, Gibraltar’s history has been volatile and it has at various times been ruled by the Spainish, the Moors and even the Dutch. The British took control for good in the early 1700’s and Gibraltar was a critical British base during World War II. 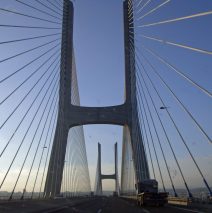 I arrived in Lisbon just before sunset and was amazed at how beautiful the city is. It actually reminds me a lot of San Francisco (with an oddly similar bridge and even cable cars). My trip to Lisbon was actually planned around meeting a friend of mine from Ireland, Des. Des lives in Dublin and he and I used to date a while back and we’ve kept in touch since. When he heard I was planning to be in Lisbon on this trip, he scheduled a business trip (he’s been working over here some lately) to coincide with my dates. I left all of the planning for these two days up to him since I figured I had enough planning to do and he knew the city better than I did. 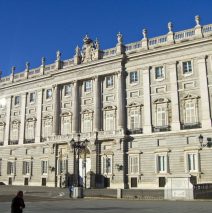 Well, my trip from Casablanca to Madrid Spain turned out to be a little more exciting than it should have been. I briefly debated whether to share this little nugget with you all but I figured I’m quick to tell the stories when I do something smart so I guess I should fess up when I do something stupid. (Those of you who think I never screw up with travel planning will get a kick out of this one.)

I booked the flight from Casablanca to Madrid with a discount European airline called Easyjet. For those of you not familiar with Easyjet, it’s owned by Richard Branson (the Brit who owns the Virgin Records/Airlines empire) and flies very cheaply to mainly European destinations. I had heard a lot of good things about Easyjet but never flown them before so I was looking forward to trying it out. And the best part (aside from the fact that they actually had a flight to Madrid from Casa) was that the entire flight cost $42 (including the $8 I paid to get something called “Speedy Boarding” which lets you board first – there are no seat assignments on this airline). And I must say, I was quite proud of myself for being so “budget-conscious”. 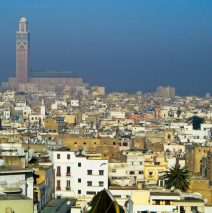 Well, I have to say that those expecting romance or adventure here in Casablanca Morocco will be sorely disappointed. Humphrey Bogart never came here, and the film Casablanca was filmed entirely in Hollywood. “Casa“, as the Moroccans call it, is actually Africa’s second-largest city after Cairo with a population between 3 and 4 million. It’s a very modern city compared to Marrakech and also home to Africa’s largest port.

When I arrived at the train station last night just after dusk, I was greeted by a throng of people and about 100 taxis all hustling for a fare. Much more crazed than my arrival in Marrakech. Once I secured a taxi, the first thing he did was try to talk me out of my hotel choice because it was “very expensive” and of course he knew of a hotel that would be much better for me. Thanks buddy, but I think I can decide where I want to stay (not to mention, I ran a marathon this morning and I am in pain from head to toe so argue with me at your own risk). He gave in and took me to the Le Royal Mansour Meridien, my hotel for the one night I will be in Casablanca (and I’m starting to think that will be plenty). 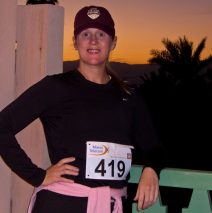 I was, however, looking forward to trying out Continental’s Business First service “across the pond” to see how it compares with Delta’s Business Elite. I had heard great things about Continental’s international service and I had high expectations since this one flight (and one Northwest flight from Tokyo to Honolulu) had cost me an extra 60,000 miles on this ticket – the difference between a business class and a first class around the world award. Turns out, Continental and Northwest consider their international Business First cabins as first class (not business) when it comes to award travel – so, of course, I was dying to see why.