Beaching it in Nassau Bahamas 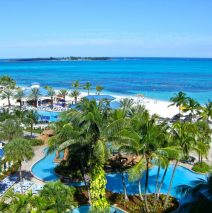 My first choice for Stop 1 on this trip was Santiago, Chile. Unfortunately, since I didn’t book the ticket until last Thursday, flights to Santiago were totally sold out so I had to get creative.

After striking out with every South American destination I could think of, I started looking in the Caribbean. To give you a little background: The rules on the Around the World ticket with Delta (or rather, Skyteam) are pretty simple, you pick a direction (east or west) and keep going until you get back to your starting point, no back-tracking allowed.

Once again I chose to go east since it allows me to choose overnight flights which save time and hotel nights. Of course, if I had all the time in the world to spend entire days on a plane and money were not an issue, I think I’d go west, it would be a lot easier from a jetlag perspective.

I’m going to have to start the posts for this year’s round the world trip with a MAJOR disclaimer. You may notice I’m starting out a bit later than usual. That’s because I wasn’t entirely sure I was even going to do a trip this year. I had a new client with a show in Atlanta in the middle of January and that has kept me pretty busy for months. I thought I might not have the time to do another trip justice. But, the later it got in January, the more I was itching to cash in those Delta Skymiles and hit the road. So, in a two-week planning whirlwind, I scrambled to pull together as much of a trip as I could.

The flights were definitely the toughest. Imagine trying to cash in miles for more than a dozen flights on two weeks notice. This is the kind of thing most people book at least 6 months in advance if not longer. But, with daily persistence on the phone with the Skyteam Around the World desk, I think I finally have a workable itinerary.