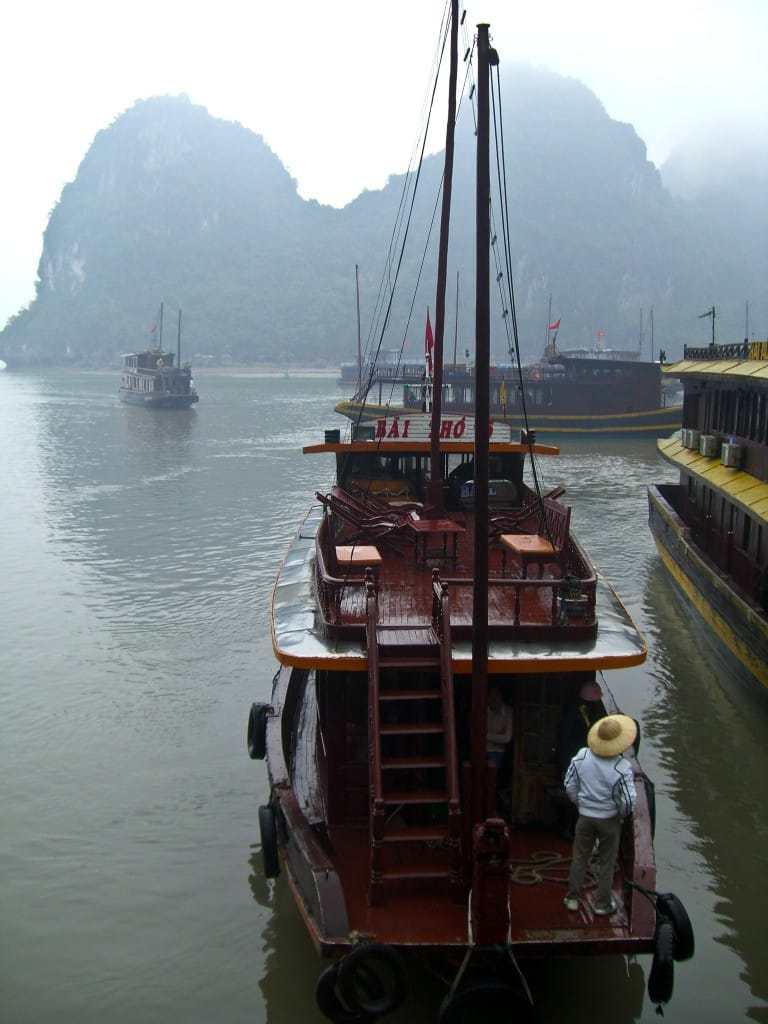 Well, if Saigon is like Shanghai then Hanoi is definitely like Beijing (and that’s probably not a compliment).

When I finally arrived at the train station it seemed almost like a different country than Saigon; dreary, depressing and cold – maybe I was just in a bad mood from the train ride.

I arrived at my hotel, the Sheraton Hanoi, a little after 10pm and the first order of business was trying to set up a tour to Halong Bay (about a 2 hour drive away) for the next morning. Obviously, this was a little difficult at 10pm but I didn’t think about making the arrangements ahead of time so I had to take whatever I could get.

There weren’t any group tours still available at this late hour (which was fine by me) but they were able to arrange for a driver and guide for me for the next morning complete with a 4-hour junk boat tour of the bay including lunch so I happily agreed to the $160 price figuring it was probably time for a splurge anyway.

And by this time, I had already decided there wasn’t much I wanted to see in the city of Hanoi.

We started out early the next morning and I requested, since this was a private tour after all, that the driver and guide make one stop on the way out of town at the main tourist attraction in Hanoi, the Ho Chi Minh Mausoleum.

Despite his wishes to be cremated, “Uncle Ho” was embalmed after his death in 1969 in the style of Communist leaders such as Mao and especially Lenin, whose Moscow tomb inspired the designers of Ho’s mausoleum.  After a quick stop where I was again having flashbacks to Beijing, we were back in the car and headed to Halong Bay.

The spectacular UNESCO World Heritage Site of Halong Bay Vietnam is made up of 3,000 islands over 580 square miles spreading to the Chinese border. Halong means “descending dragon” and is a reference to the legend of the enormous beast that is said to have careened into the sea at this point, cutting the bay from the rocks.

The weather today wasn’t great, very hazy and lightly raining, but apparently that is the norm for this time of year. My guide, Mai, said it was still worth the trip even with the weather and she was right.

When we got to the boat, I was excited to see that we had the whole thing to ourselves and one of the tables was set for two for lunch. We set sail and had a wonderful seafood lunch on the hour-long sail out into the bay.

The limestone rock formations reminded me a lot of the islands around Krabi that I had seen a few days earlier, but this place had a much different feel. Much more, spiritual, I think. There are even fishing villages made up of floating houses that sit right on the water in the bay.

There were dozens of other junk boats around but unlike in the Phi Phi Islands, these boats were all silent, no obnoxious motor noise. It was eerily quiet for the whole ride. Very relaxing to just glide along the glass-like emerald green water taking in all the island formations and the other boats around you. Just beautiful.

Most tourists opt for an overnight stay on one of the junk boats (some of which are big enough to have private cabins) and many even cruise the bay for several days. If I’d had the time maybe I would have tried that, I bet it would have been awesome. But as usual, time was short.

The islands were lovely but the highlight of the tour was definitely the Hang Hahn cave Mai took me to after lunch. I’ve honestly never seen anything like it.

The cave was just discovered in 1996 and has only recently had things like steps and lights added to it so that it is accessible to tourists. It was remarkable inside, loaded full of stalactites and stalagmites. A real geological wonder. You couldn’t help but just look around in awe. Which is what most of us were doing and bumping into each other in the process.

After we left the cave we boarded the boat again for the peaceful ride back to the docks and the long drive back to the hotel. It was a great day despite the weather and I’m glad I made the trip to northern Vietnam just to see Halong Bay, it was probably even worth the 32 hour train ride – though if I had it to do over again…I’d book a flight.

Next up, my last stop of the trip…Maui!