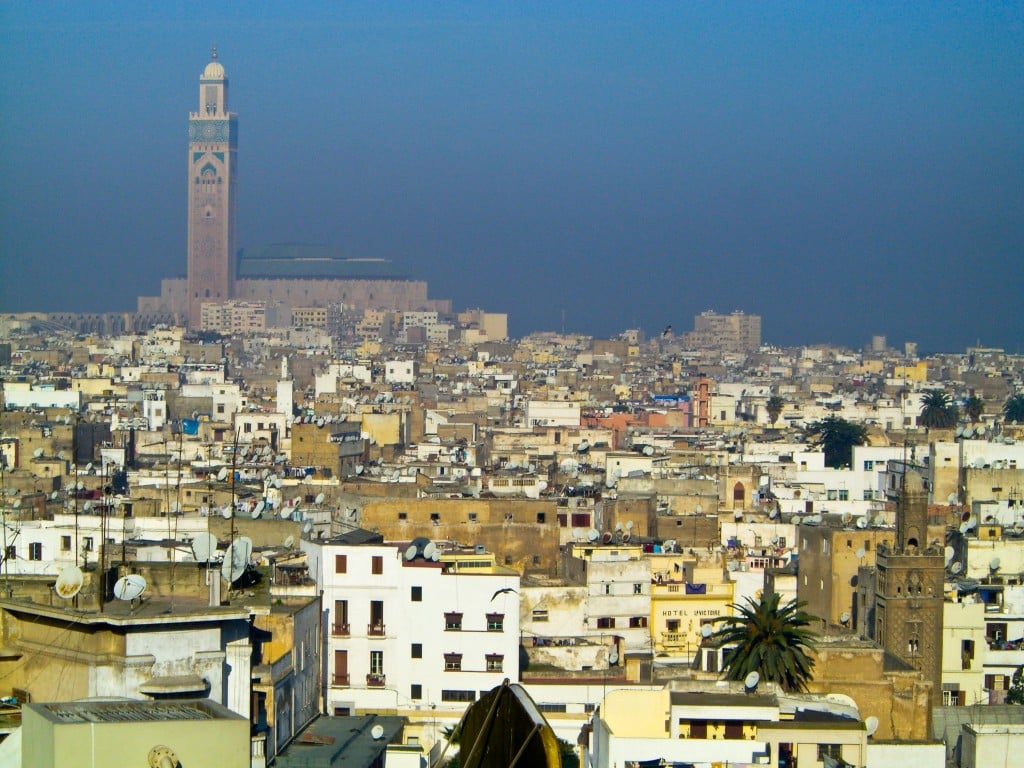 Well, I have to say that those expecting romance or adventure here in Casablanca Morocco will be sorely disappointed.

“Casa“, as the Moroccans call it, is actually Africa’s second-largest city after Cairo with a population between 3 and 4 million. It’s a very modern city compared to Marrakech and also home to Africa’s largest port.

When I arrived at the train station last night just after dusk, I was greeted by a throng of people and about 100 taxis all hustling for a fare. Much more crazed than my arrival in Marrakech.

Once I secured a taxi, the first thing he did was try to talk me out of my hotel choice because it was “very expensive” and of course he knew of a hotel that would be much better for me.

Thanks, buddy, but I think I can decide where I want to stay (not to mention, I ran a marathon this morning and I am in pain from head to toe so argue with me at your own risk). He gave in and took me to the Le Royal Mansour Meridien, my hotel for the one night I will be in Casablanca (and I’m starting to think that will be plenty).

I was exhausted and starving as I hadn’t really had a meal since the race, the questionable chicken sandwich I had on the train wasn’t holding me anymore.

I had read that the hotel had an excellent Moroccan restaurant so I decided to try a real Moroccan meal. It turned out to be a great idea – it was a terrific meal and I was back in my room and sound asleep by 9pm.

A walk around Casablanca

The next morning, after a great night’s sleep (finally), I planned to check out Casablanca’s biggest attraction and Morocco’s major landmark, the Hassan II Mosque.

Proclaimed as a triumph of faith and craftsmanship, King Hassan’s mosque on the shores of the Atlantic was finally opened in 1993 after 6 years of construction. It is the second-largest mosque in the world, after Mecca, and possesses the tallest minaret (656ft high).

The mosque’s beautiful setting on the coast with breakers crashing at its base was apparently inspired by the Koranic verse: ‘the throne of God being on the water’. The prayer hall inside can accommodate 100,000 worshippers. It was stunning and worth the stopover in Casa.

The nearby “beaches” however were another story. Not much to see there but a bunch of rocks.

And since there were a number of persistent men who kept trying to talk to me as I walked down the shore, I gave up on my wandering and headed back to the hotel for my 3pm flight to Madrid.

Morocco has been nice but I’m ready to get back to the European continent for a few days.