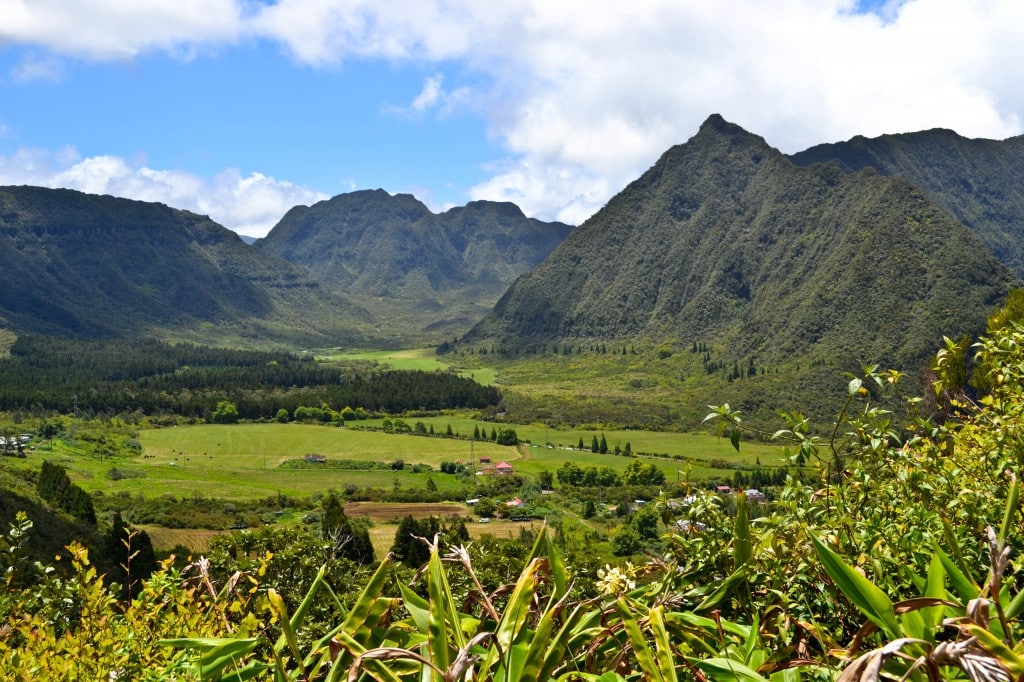 Sandwiched between Madagascar and Mauritius…and hundreds of miles from anywhere else, lush Réunion Island is a French outpost with a decidedly spicy Creole flavor.

Though it’s not known for pristine beaches and flashy resorts, like neighboring Mauritius, the island does have a few picturesque sandy shores framed with sparkling blue sea and more than one nightlife-centered resort town.

But the real draw of Réunion is its stunningly unique natural setting featuring soaring peaks and one of the world’s most accessible active volcanoes.

My visit to Réunion island was split into two parts. Since Air France flies to both Mauritius and Réunion I didn’t really have a preference of which to see first – which was good because the only frequent flier availability was in and out of Réunion (and I was extremely lucky to get that!). I decided to just fly myself between the two via convenient and reasonably-priced forty minute flights on Air Mauritius.

After all, I could hardly come all the way to this part of the world and not see them both.

The way the flights worked out, I ended up with a 6-hour layover on Réunion before my connecting flight to Mauritius where I’d be spending the first two nights. Never one to wait out a layover when there’s something more productive to do with my time, I decided to put those precious hours to good use and headed to the rental car counter.

In about 30 minutes I had a set of car keys in one hand, an island map in the other and a general plan for an afternoon of adventure.

Most visitors come to Réunion island for two things: the sunshine-splashed coastline of the west (sometimes called the “Réunion Riviera”) and the dramatic volcanic cliffs of Piton de la Fournaise.

Since there was no way to predict how long the slow, winding drive up to the volcano and back would take, I played it safe and decided to drive the west coast and explore the island’s resort towns. I also had an ulterior motive; I hadn’t yet booked a place to stay for my return to Réunion in a few days and figured this was as good a time as any to check out some hotel options.

As I would soon learn, driving in both Réunion and Mauritius involves navigation by directional signs more so than road maps and – more importantly – a demonstrable mastery of the “roundabout.”

And just to keep things interesting, these two neighboring islands drive on the opposite side of the road. In Réunion, that meant driving on the left again, as I had recently re-acquainted myself with in Malta.

Ever-fearless of vehicular challenges, I confidently made my way west through the capital of St. Denis and then south, stopping first at a spot that came highly recommended by the helpful guy at the car rental counter – the beach resort of Boucan-Canot.

After walking the sandy shore end to end and dipping my toes in the Indian Ocean, I continued down the coast to St-Gilles-les-Bain, the largest and most cosmopolitan resort area, where I stopped for lunch, became attached and started hotel hunting.

With no trouble at all, I found a lovely little hotel near the beach called the Residence Tropic Appart Hotel for just 78 euro and made a reservation for Friday night.

After venturing further south to the beaches of l’Hermitage-les-Bains and la Saline-les-Bains, I headed back north to the airport feeling like I’d gotten a great head start on my visit to Réunion.

After two marvelous nights on Mauritius, I took the quick flight back to Réunion Friday morning. I reconnected with the friendly car rental agent from a few days before and in no time I was back out on the road and headed for higher ground.

My plan was to spend the entire day driving through the heart of Reunion’s National Park and a recent addition to UNESCO’s World Heritage List.

The National Park covers 40% of the island’s surface area and includes the volcanic summits of Piton des Neiges and Piton de la Fournaise as well as the three natural amphitheaters of Cilaos, Mafate and Salazie carved into the land.

Formed by millions of years of rainfall and erosion after the collapse of the walls of a prehistoric dome volcano that once encompassed the whole island, they were given the name ‘Les Cirques” because of their circular shape. The Cirques are a natural wonderland with mineral springs, towering waterfalls and endless hiking trails.

You could spend days on the island just hiking the Cirques but since my time was sparse, I limited my focus to the National Park’s top attraction.

Réunion’s volcano, Piton de la Fournaise, is one of the worlds’ most active and erupts with great regularity. The last major eruption was in 2007 when fiery lava spewed down the eastern and southern shores for days expanding the island’s land mass.

Since 1998, Fournaise has rumbled with malevolence at least every two years making me realize, after a quick calculation, that it was probably due for an encore any time. Luckily, local scientists carefully monitor all activity around the crater and volcanoes in general are notoriously bad at surprise parties.

After successful navigation of a series of roundabouts (which I have completely mastered this week), I easily made my way to the island’s interior road leading up into the sky.

The landscape began to change almost immediately from sunny beach resort to lush tropical vegetation dampened by rolling mist. It was as if I’d traveled to another island entirely. The temperature dropped rapidly as I neared the summit and I was surprised to see a bit of traffic up ahead.

I’d hardly seen another car on the whole drive so this didn’t make sense until I rounded the corner and was astonished by the landslide of red clay burying the oncoming lane and most of mine in rocks and mud. It had obviously just happened because the police and emergency crews were just arriving at the scene and routing traffic around it. Luckily, it didn’t appear there were any cars on the road when the earth gave way. Frightening, nonetheless.

The dramatic landscape created by the volcanic activity of Fournaise seems almost schizophrenic with lush green rolling hills around one corner and barren scorched earth around the next.

But nothing really prepares you for the summit and the moment when you stand on the tiny wooden platform perched on the precipice of the cone and stare miles down into – literally – the core of the earth. I’ve never seen anything like it.

I mean, sure, I’ve seen volcanoes – heck I saw three last week on Easter Island alone. But they were all long extinct, their once-powerful craters replaced by placid lakes.

It was a stunning and humbling spectacle of the power of nature. I can’t imagine what it must be like to live on an island in the middle of a vast ocean with this beacon of lava-spewing unpredictability in your back yard. Talk about living on the edge.

Appropriately-awed, I slowly began the twisting descent down the opposite side of the volcano and toward my hotel on the west coast, stopping at every lookout point along the way to capture the beauty of the panorama through my camera lens.

Because much of the south and east of the island are in the lava-flow zone, there isn’t as much to see there. So after a full tour of the western side of the island and an entire day spent in high-altitude volcano admiration, I felt like I had seen as much of the island as one can see in just two days. I was again fortunate to benefit from nearly perfect weather both days.

Since I’ve already visited the Seychelles Islands on Round the World #4, my visit to the Maldives later this week will make my Indian Ocean grand slam complete!