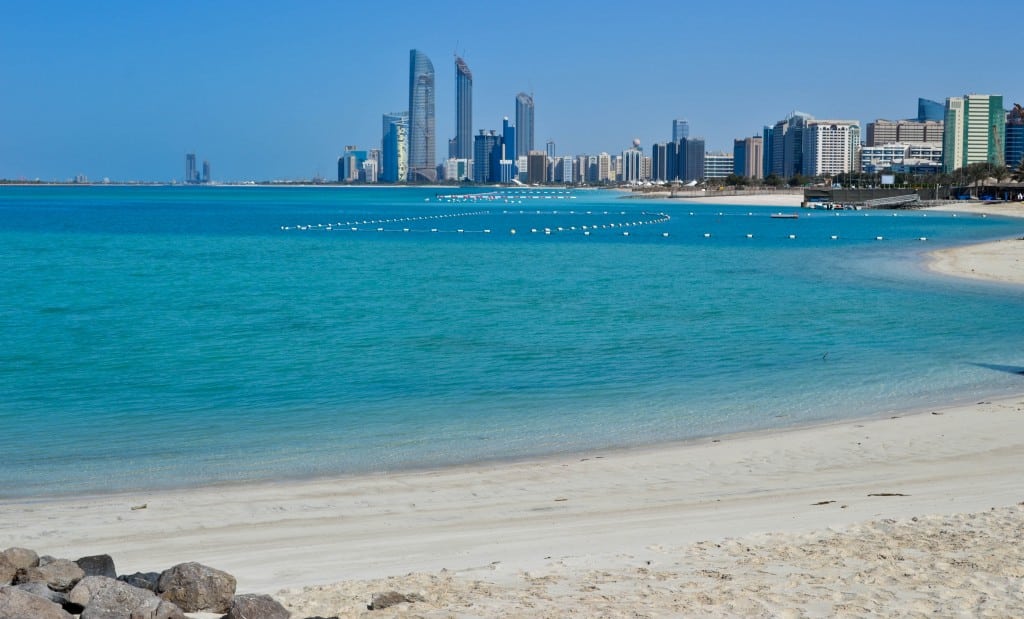 After a 12-hour flight from Réunion, I land in Paris and hop on the train to meet up with my friend Susan at the Westin Paris Vendome.

Susan landed in Paris this morning and is joining me for the next 2 weeks of Round the World #7! This is a first for me since my RTW trips have always been solo endeavors But I am super excited to have a travel buddy for a bit.

And since we’re hitting some pricey destinations in the next two weeks, it’s great to finally have someone else along to share those hotel costs!

We meet up at the hotel and head straight out for a spectacular dinner at my favorite little restaurant on Ile St. Louis. After a terrific French meal, we call it a night early since we both spent last night on a plane.

The next morning we catch the train back to CDG airport bound for Abu Dhabi.

Where is Abu Dhabi?

Situated in the southeast of the Arabian peninsula, the United Arab Emirates (U.A.E.) is a federation of seven emirates (similar to principalities). Abu Dhabi is the capital city of the UAE and sits on an island just off the mainland in the Persian (Arabian) Gulf.

On my very first Round-the-World trip, I visited a different Emirate, Dubai, and it was quite an amazing experience. Especially my uber-luxurious stay at the Burj Al Arab (considered the world’s only 7-star hotel).

The UAE is known for oil, opulence, and over-the-top architecture and I wonder if Abu Dhabi will measure up to the glitz of Dubai.

But first, a confession…

I do have to admit, my entire reason for visiting Abu Dhabi is to get to our next destination, the Maldives. Abu Dhabi is one of the few cities in the world with reasonably-priced, well-timed flights to these remote islands.

Read More: Where are the Maldives (& why you should go now!)

But, I’ve never been to Abu Dhabi and I did love Dubai. So, I thought Abu Dhabi would make a perfect stopover on this year’s round-the-world trip. Two destinations for the price of one, you might say!

To maximize our short stay, we book a room at the lovely and centrally-located Sheraton Abu Dhabi Hotel & Resort. After a good night’s sleep, we grab breakfast at the Sheraton and head out to explore Abu Dhabi.

Top 3 Things to do in Abu Dhabi

Needless to say, there’s plenty to see and do!

But, we have just 24 hours to explore the best of Abu Dhabi. So we narrow down our wish list to some of the city’s top sights.

First up on our 24 hour tour of Abu Dhabi, it’s time to hit the beach. So we head toward the sea to Abu Dhabi’s popular waterfront promenade, the Corniche.

Stretching nearly 8 kilometers, the sun-splashed Corniche area is lined with powder-soft white sand beaches on one side. On the other, parks, cafes, and playgrounds. So it’s the perfect family-friendly place for a morning walk or run.

The calm, clear waters of the turquoise Arabian Gulf lap the white sands of Corniche Beach. These are some of the best beaches you’ll find in all the Emirates.

The Corniche culminates on the island of Kasser al Amouage where you’ll find the city’s largest mall – Marina Mall.

It’s a beautiful place to start our day in Abu Dhabi and we end our walk inside Marina Mall for lunch.

After lunch, we head over to Abu Dhabi’s most iconic luxury hotel, the Emirates Palace.

The distinctively massive Emirates Palace is the hotel alluded to in the movie “Sex & the City 2.” However, the movie was actually filmed in Morocco because U.A.E. officials would not allow filming within the Emirates.

The hotel doesn’t allow anyone but guests or those with restaurant reservations to enter, but we manage to successfully talk our way in. We spend some time walking around the lavish lobby and pricey shops before heading on to our next stop.

We devote the rest of our afternoon to the enormous Sheikh Zayed Grand Mosque.

One of the largest and most beautiful mosques in the world, the Sheikh Zayed Mosque is the only one in Abu Dhabi open to non-Muslims. And as long as you visit outside of the daily prayer times, you are free to explore this exquisitely appointed mosque.

Large enough to accommodate 40,000 worshippers, Abu Dhabi’s Grand Mosque is just as grand as the name implies. The Abu Dhabi mosque is said to “unite the world” with its design and construction using artisans and materials from all over the world.

More than 3,000 workers and 38 different construction firms were involved in the creation of the Moorish and Mughal-inspired design. Natural materials like marble, gold, semi-precious stones, and crystals feature prominently in the design.

The courtyard of the mosque is stunning enough in itself but we are completely mesmerized by the beauty of the interior. Gold, gemstones and mosaic tiles blend with brilliantly-colored giant chandeliers. The combined effect is simply overwhelming.

I’ve visited a number of mosques in my travels from Cairo to Istanbul to Amman. Of those, the Sheikh Zayed Mosque is definitely the most beautiful from a décor perspective. And the interior surpasses even the opulence of the Emirates Palace from earlier today.

Wrapping up 24 hours in Abu Dhabi

By dinner time, we conclude our full day of exploration in Abu Dhabi. The sights we visited today were amazing but it’s obvious there is so much more to see and do in Abu Dhabi.

If only we had more time!

But in just a few hours, we’re headed back to the Abu Dhabi airport to catch our flight to Malé.