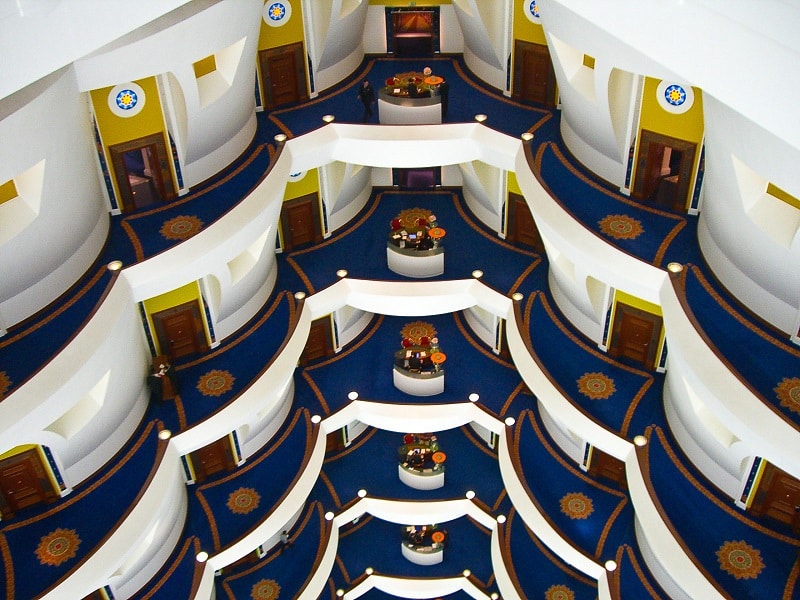 It’s Day 13 of this 30-day trip around the world and today we make the jump from Africa to the Middle East.

After a long flight from Cape Town, I had a long enough evening layover in Paris to squeeze in a visit with old friends in the city. Later that night, I headed back to the airport for the last flight of my RTW ticket with Air France.

Like the earlier Air France flights, it was a terrific flight with only two people in my cabin (no supermodels this time).

I touched down in Dubai at 8:30am. I was quickly tiring of the airport cab routine so I was thrilled that The Burj Al Arab, my hotel here in Dubai, sent a driver to meet me at the airport. I expected to see the driver once I cleared customs but was pleasantly surprised to find him waiting for me just after I stepped off the plane (still not sure how he managed that).

He escorted me through passport control and customs in 5 minutes flat and next thing I knew I was cocooned in the plush leather seats of the Burj Al Arab’s Rolls Royce and on my way to the hotel.

The driver offered me a cold towel, a bottle of water, and even a music list so I could make a selection for the ride to the hotel. I’m not exactly sure what to do with all this luxury but I suspect I will figure it out.

And this was just the beginning of the exceptional service the Burj would provide during my brief stay.

As we drove in elegant comfort, I pondered the history of this unique city.

What makes Dubai a great city to visit?

Dubai is the quintessential home of sand, sun, and shopping. A century ago, it was a tranquil town, home to Bedouin traders and pearl divers.

Today, the merchants have gone international and skyscrapers stand alongside the mosques and wind towers of Old Dubai. The ingenuity and audacity of the city’s rulers is unparalleled. Running out of coastline to build hotels, they instead built vast artificial islands adding 74 miles of new beachfront.

“The Palm” is the first of these ventures, a grouping of man-made islands being developed for new homes, condos and hotels. The newest undertaking is “The World,” another grouping of islands crafted in the shape of a map of the world.

Want to own Australia? Now you can, in the form of an island in the Persian Gulf.

To get more visitors to Dubai’s sandy shores, the government built an award-winning international airline in 15 years, not to mention a modern airport that is considered the duty-free capital of the world.

Where to stay in Dubai

But Dubai’s crowning glory is the hotel that defines its skyline, the exquisite Burj Al Arab.

Built on its own man-made island (with views of both The Palm and The World), the Burj is the only recognized 7-star hotel in the world.

Comprised of just 202 multi-story luxury suites, each with a personal butler, the hotel is over-the-top in both service and decor.

It was a hotel I’d swooned over in travel magazines and I knew it had to be a part of this once-in-a-lifetime trip.

However, it was definitely my one big splurge at approximately $1,000 a night so obviously, I had to settle for just one night. Thankfully, I was able to use points for the vast majority of my 25 hotel nights (excluding 5 nights in-flight) so this was one of only a few nights I actually paid for.

And now I’m here in Dubai and though there are lots of things to see and do, my focus is totally on making the most of my 36 hours at this epic hotel – which is an attraction all its own.

(Fortunately, I’d already checked off “camel ride through a desert” from my Bucket List a few days ago in Cairo.)

As we pull up to the hotel, I am welcomed by Sayyora who will be checking me in. She whisks me upstairs to the 5th floor where my room is located.

As we step off the elevator, we are cheerfully greeted by Ismail, the 5th floor concierge who I will be sharing with only 8 other guests.

Once seated in my room, I am next introduced to my butler (yep, butler), Mondher, who arrives with fruity drink in hand – I like him immediately.

Sayyora goes thorough the brief process of checking me in while we are all seated in my room. After showing me how to reach them with one button on my phone, Ismail (whose desk is only 10 feet from the door to my room) and Sayyora excuse themselves and Mondher proceeds to acquaint me with the features of my room.

Getting to know my suite

Everything in the hotel is the height of technology and the rooms are no exception. Even the key (a simple black leather pouch with the hotel logo) need only be waved in front of the sensor by the door to unlock the room.

Inside the room, almost everything is controlled by remote (one upstairs and one down), the curtains, the door locks, the “Do Not Disturb” sign, on-demand movies, DVD player, Internet, etc.

When someone rings the doorbell, the TVs in the room project video of who is at the door via a security camera. To open the door you push a button on the remote or on the phone.

Aside from its technological aspects, the room has stunning floor to ceiling panoramic views of the city of Dubai and the Persian Gulf. The room itself is plush, colorful and almost obscene in its decadence.

Everything about this room is larger than life, even the toiletries which are all full-size Hermes products including perfume – those will definitely be going home with me, hello Fed-Ex.

Other value-added amenities provided include a bottle of wine, a large box of chocolates, a box of almond-stuffed dates and a huge bowl of exotic fruit.

Additionally, there is an office area with a laptop computer, printer, and a newspaper menu with more than 200 offerings that can be delivered upon request.

But most importantly, there is a “Pillow Menu.”

This is a new one for me but I quickly decide this is a room service menu I can get on board with. The pillow options seem endless so when Mondher makes a pillow combination suggestion that he confidently boasts “never disappoints,” I decide to rely on his expertise in this department.

After all, if you can’t trust your butler, who can you trust?

After settling into the room, I head down to the pool and then over to check out the beach area (which is adjacent to the island and can be reached by hotel golf cart).

As I pass Ismail’s desk on my way to the elevator, he seems disappointed that I haven’t yet thought of anything I need his help with. It occurs to me that perhaps it would be a good idea to re-confirm my flight on Gulf Air to Delhi the next day so I retrieve my itinerary and leave it with him to call the airline while I explore the rest of the hotel.

When I return later, not only has he confirmed my flight but he has arranged for the airline to pick me up in a car. Apparently, they provide this service for Business Class tickets, which mine is, but I would never have known that if not for him.

Forget Mr. Right, perhaps a good butler is the man I’m really missing in my life.

I spend an hour or so at the pool before the strong winds get the better of me and I head over to the beach area to see the view of the hotel from the Dubai coastline. The valet at the lobby entrance signals the golf cart and I am driven across the bridge to the beach.

As we pass the entrance gate to the island, there are probably 20 – 30 people with cameras outside the gate taking pictures of the hotel. Access to the Burj Al Arab is strictly limited to registered guests and the guests of sister hotels in the area with confirmed reservations in one of the Burj’s high-end restaurants.

The views from the beach area are stunning and the sand is as fine as baby powder. But again, the winds are high and after an hour I’m ready to return to the comforts indoors.

Back inside, I wander the lobby taking in the visual overload of stunning views from every angle. There are dancing fountains with light shows, aquariums along the escalators, and everyone – and I mean everyone – has a camera and is blindly wandering taking pictures.

About half of the people in the lobby are dressed in traditional Saudi robes giving the place the feel of a Sheikh’s palace. It is almost impossible to stop taking pictures but I finally pull myself away from the lobby and adjourn to the top floor bar for a cocktail with a killer view.

This morning I was happy to receive a call from Sayyora to say that she had extended my checkout until 7:00pm tonight. This is excellent news since my Gulf Air flight doesn’t depart for New Delhi until 10pm.

I spend the day at the pool and the gym and then pack up a box to ship back home to lighten my luggage a bit. Everything I’ve bought so far, all the goodies from the Burj, and a few clothes I won’t need again are heading back to the US via slow boat.

I need room for more shopping for the next few legs of the trip!

When I finish, my luggage is much lighter and Mondher whisks the box away to ship.

I leave the hotel (for the first time) around 5pm to check out the shopping mecca of the Middle East, the Mall of the Emirates. I don’t have anything in mind to buy but I’ve heard that the mall itself is amazing and, like the Burj, it doesn’t disappoint.

Most impressive, the indoor ski slope called Ski Dubai. I wander the mall for an hour or so before heading to the airport.

My stay at the Burj Al Arab was simply incredible and a once-in-a-lifetime experience. After all, I’m not likely to spend that much on a single hotel night ever again! In fact, it makes the list as one of my top 30 most extraordinary travel experiences around the world.

My Gulf Air flight from Dubai to Muscat, Oman (I needed a map for that one too, it’s near Yemen) was delayed due to “unforeseen circumstances“.

Since when is that an acceptable excuse? There’s a lot of missing information there.

The airline was kind enough to send me an e-mail about the delay; unfortunately, I got the e-mail while in their lounge already at the airport.

Fortunately, it was not enough of a delay to cause me to miss my connection to Delhi (which would have been a huge problem on such a tightly-scheduled trip). I arrived in Oman, watched the original episode of The Apprentice – which was on in the Gulf Air Lounge – and then at 2:30am, boarded my flight to New Delhi.

I’m not at all sure what to expect from India. This trip has already been such a whirlwind. But I know for sure it will be very different from my luxurious stay in Dubai.