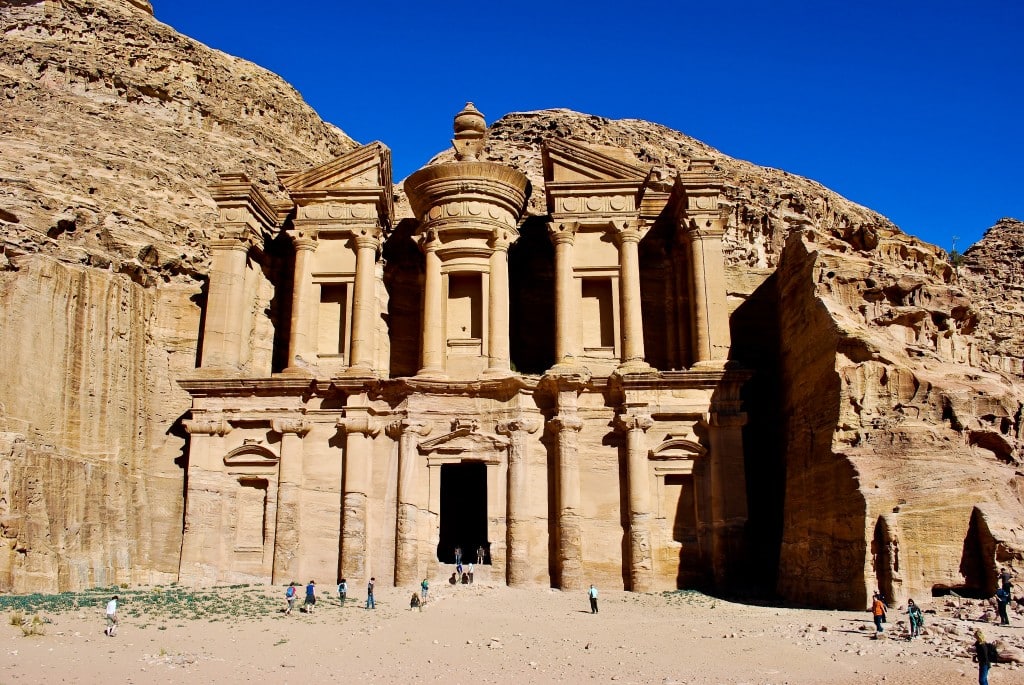 And I’m officially off on Round the World #5! First stop, Jordan.

I hopped in a cab and within 10 minutes we had the misfortune to become car #4 in a 5-car pile-up on the highway, yikes! My driver managed to swerve the car into the shoulder to avoid a direct hit on the car in front of us so we were in better shape than the other cars involved.

Instantly, all of the drivers jumped out of their cars – arms flailing, Arabic expletives flying – to survey the damage. At this point I’m thinking, oh great, we’re going to be stuck here on the highway while we wait for the police. But no! Apparently that’s not how they do things in Jordan.

All of the drivers circled their vehicles reclaiming any loose items like hubcaps and tail lights, got right back in their cars and drove off! Not so much as an exchange of contact info. All in all, a 5-minute delay. Definitely could have been worse.

That adventure behind me, I finally arrived at my hotel of choice for my visit to Jordan, the Le Meridien Amman. I chose this property mainly because of its excellent location in the city center.

It turned out to be a beautiful hotel but its most impressive feature was definitely the service. From the security guards running the metal detector at the front door, to the front desk agents and housekeepers, everyone called me by name and took great interest in ensuring that I was enjoying my stay and seeing everything I wanted to see while in Jordan.

Once I was settled into my room, the next step was to line up a trip to Petra Jordan for the next day. With two full days to explore, Petra was tops on my list. After a helpful visit to the concierge desk, I had a ticket on the JETT bus to Petra for 6am the next morning. With a 5am wake-up call looming, I headed for bed.

A Day Trip to Petra on the JETT Bus

After a good night’s sleep I was at the bus stop at 5:45am, ready to go. The bus to Petra (operated by JETT) costs about $17 US roundtrip and was a steal considering the trip was 3 hours each way. The bus was a nice air-conditioned motor coach and I was happy to see we would only have 12 passengers on the ride down so there was plenty of room to spread out.

During the ride, I got to talking to some the people sitting around me. I first met Rebecca and Marcus from Sweden. Rebecca is a nurse living in Amman while studying Arabic so she can work as a nurse in the Middle East. Marcus was visiting her from Sweden for the week so they were making the trip down to Petra to do some sightseeing.

Also with them was Yousef, a Jordanian friend of Rebecca’s who would turn out to be our tour guide for the day. I also met Lucy, an America from Minnesota living and studying in Damascus, Syria.  She was on her way back from the States for the holidays and stopped over in Jordan to see the sights for a few days.

After chatting most of the drive down, we decided to band together for the day to explore Petra.

Though Jordan is a country steeped in history, Petra is by far its most famous attraction. Aptly-named, Petra means “stone” in Greek.  Dating back as early as the 5th century BC, this city on the edge of the Wadi Araba was quite literally carved into the sandstone of a deep canyon.

Originally created by the Nabateans, a group of Arab-speaking Semitics who moved into Southern Jordan two thousand years ago, Petra was in control of trade routes stretching from Africa to India and China. The Romans later conquered the area and it was eventually abandoned and forgotten until a Swiss explorer rediscovered it in 1812.

After a bit of sticker shock at the ticket counter (the entrance fee has recently skyrocketed to almost $50 US), we entered a narrow gorge called “the Siq” which creates the almost mile-long dramatic opening act to Petra’s wonders.

We wound our way through the astonishing geological formations, colorful rocks and water channels, and were rewarded with our first glimpse of the famous Treasury. As we emerged from the Siq, I was blown away by the sight of the Treasury.

Tourists snapping pictures and local Bedouins hawking camel rides through the site added to the chaos surrounding Petra’s first treasure. Featured in Indiana Jones and the Last Crusade, the Treasury was painstakingly chiseled from sand and stone by the ancient Nabateans. It is truly stunning.

Next, we dodged the persistent camel jockeys and made straight for our ultimate destination, the Monastery. Located several miles into the site, we knew that if we wanted enough time to make the challenging hike to the top we’d need to start there first. Our bus had arrived around nine and we had to be back on it by 4pm.

The twisting climb through a narrow gorge to the Monastery consists of 800 steps with seemingly endless uphill slopes in between. It took us a little more than 2 hours to make the climb with a couple of breaks along the way. Many people opt to ride one of the readily available “air-conditioned” donkeys (or so their owners claimed)  to the top, but we toughed out the climb.

Well, except for Marcus who made it halfway before flagging down the first available donkey. We found him sipping a cold beverage when the rest of us finally made it to the top.

The climb was well worth it, though. When we finally got our first look at the Monastery, we were all in awe. It was amazingly beautiful and the hike to Petra’s magnificent Monastery still ranks as one of my Top 30 most extraordinary travel experiences around the world.

Since we were exhausted and it was now past lunch time, we decided to find a shady spot and have lunch. It was at this point that I was immensely grateful I had made friends on the bus.

Though there was a small stand selling drinks at the top, there was no food for sale. Thankfully, Rebecca had brought enough sandwiches for everyone and I gratefully accepted when she offered me one. Lucy had also brought food and snacks so we had a lovely lunch on a large rock with a killer view.

After lunch and several photo ops, we realized we had better start the climb down as it would take us almost 2 hours to make the hike back to the bus. It took longer than we thought with a little more sightseeing on the way back and we just barely made it by 4pm.

The sun set quickly once we began the drive back and post-hike exhaustion lulled most of us to sleep for the ride. By 8pm we were back in Amman and I couldn’t wait to get back to the hotel for a shower and some dinner. Slept like a champ that night.

Woke up today feeling like I ran a marathon yesterday. Uphill. O-U-C-H.

Slept in a little and then met up with Yousef from the Petra trip yesterday for a tour of the city of Amman. Yousef is Jordanian and lives in Amman and graciously offered to give me a walking tour of the city for my last day in Jordan.

Our first stop was the King Abdullah Mosque. Built between 1982 and 1989, the mosque is a memorial to the assassinated King Abdullah I and is capped by an enormous blue mosaic dome. I was especially happy to have Yousef with me at the mosque to determine which entrance we should use and where I needed to go to obtain a hijab, which women must wear to enter. We took off our shoes and made our way inside.

The mosque was empty as it was still almost an hour before the next call to prayer. The interior was bright and colorful with an extravagant chandelier and intricate stained glass and mosaics. I am always impressed with the beauty of the interior of the mosques I’ve visited. It’s very different from the inside of a church but equally ornate and beautiful.

Our next stop was the Roman Theater where we also visited both the Museum of Popular Traditions and the Museum of Folklore. Yousef was an excellent tour guide explaining the local customs and traditions to me as we went along and I told him he should consider a career change to tour guide.

Our last stop and the place I was most excited to visit was the Amman Citadel. Towering above the city, the Citadel is the site of the ancient city of Rabbath-Ammon. The National Archaeological Museum here contains the earliest known biblical texts ever discovered, the Dead Sea Scrolls.

The scrolls were written sometime around 50 BC and were later discovered stored in caves on the West Bank of the River Jordan. Though the scrolls tell of a treasure hidden somewhere on the West Bank, nothing has ever been found.

After leaving the Museum, we strolled around the Citadel taking in the sweeping view of the hills of downtown Amman. It’s a beautiful city from above and the views were incredible on such a magnificent day.

My tour of Amman complete, I thanked Yousef profusely, said goodbye and headed back to my hotel.

Bordered by Iraq, Saudi Arabia, Syria and Israel, Jordan is an oasis in an otherwise turbulent and troubled region. I was impressed by the quality of the tourism infrastructure here, from the hotels to the preservation of ancient wonders like Petra.

But mostly I will remember the friendliness of the people and the warm welcome I received from everyone I encountered here. Jordan is a safe and modern destination and the opportunity to immerse myself in the ancient history of the region was an experience I will not soon forget.

Next stop, the Seychelles!