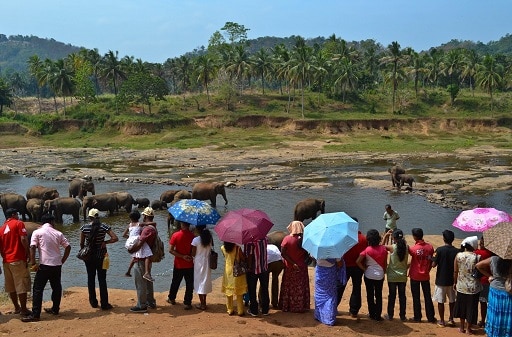 After a quick and painless 90-minute flight from Malé, we landed in Sri Lanka just as the sun was setting. Susan had booked our room in Colombo with her Hilton points and arranged for the hotel to pick us up at the airport.

We considered renting a car for our 30-hour stay but since we would have had to pay for 2 days, we decided to get to the hotel first and consider the car rental for the next day. The drive into the city took almost an hour and as I peered out the window, I quickly realized that this was not a country I wanted to drive in.

I’m generally pretty adventurous when it comes to driving in foreign countries and more than comfortable with driving on the other side of the road. But as I looked around, what I saw outside the window reminded me of my visit to India more than I cared to admit.

There were no lanes, no traffic lights and the streets were thick with buses, tuk-tuks, motorbikes and cars. The entire scene verged on chaos and I truly had no desire to be an active participant in it.

When we arrived at the lovely Hilton Colombo Hotel, we inquired about hiring the hotel’s car and driver for the next day. We didn’t have a very ambitious itinerary for our brief stay. The plan was to visit the Elephant Orphanage and the Royal City of Kandy in the hill country nearby. Since the traffic and roads are so bad in Sri Lanka, the 60 mile drive to that part of the country could take nearly 4 hours.

The hotel car with driver was about $200 for the day and we could go anywhere we wanted before being dropped off back at the airport for our redeye to Bangkok. Never one to be afraid to throw money at a situation if it makes the most sense, I decided to go for it. Spending $100 each to have a driver who knew where he was going was clearly the safest and most efficient way for us to see some of the country in a day.

So we booked the car, settled into our room, ordered room service and set the alarm for 6am the next day.

A Visit to an Elephant Orphanage

The next morning, we had breakfast at the hotel, checked out and loaded our bags into the hotel car for our day trip around Sri Lanka.

Believe it or not, National Geographic Traveler Magazine recently named Sri Lanka one of the “Top 6 destinations for world travelers in 2012.” Despite this commendable title, the only real reason I’d planned a stopover in Sri Lanka was because all of the flights from the Maldives seemed to go through there.

It seemed silly to just connect through the airport without trying to see a little of the country, so I decided to spend one night there and take in a few sights.

Sri Lanka put an end to a bloody 25 year-long civil war in 2009 and since then tourism has expanded rapidly. Today, peace prevails and top hotel chains like Starwood and Marriott have announced plans for new construction.

The landscape of Sri Lanka has a lot to offer visitors. From white-sand beaches and rolling tea plantations to wildlife parks and several UNESCO World Heritage Sites, Sri Lanka’s natural resources are likely to draw increasing numbers of visitors now that the political situation has stabilized.

After a 60-mile drive that indeed took almost 4 hours in traffic and on mountain roads, our first stop for the day was the Pinnawala Elephant Orphanage. A friend of Susan’s who was from Sri Lanka had told her about the orphanage and it was the #1 thing we both wanted to see while we were here.

Thanks to the delay in our arrival, we missed the morning bottle feeding of the baby elephants but arrived just in time to see the elephants enjoying their late-morning trip down to the river.

There were dozens of elephants – young and old – enjoying the cool river on a blazingly hot Sri Lankan day. There were also hundreds of people (mostly locals) who had come out to see them. Since the day of our visit turned out to be Sri Lanka’s national independence holiday, tons of local families were out and about enjoying the day. It was so much fun to watch the baby elephants play in the water and we spent quite a while just taking it all in.

From there, we visited Sri Lanka’s oldest tea factory. Tea is Sri Lanka’s primary export and much of the local economy centers around it. I’d never seen tea made from earth to tea cup before so it was actually pretty interesting. We even got to sample some of the tea at the end of our tour.

Next, we visited the Royal Botanical Gardens. The grounds of the botanical gardens were pristinely landscaped and quite beautiful. There was an elaborate orchid house with orchid varieties I’d never seen before and a restaurant where we stopped for lunch.

The Royal City of Kandy

Our final stop for the day was one of Sri Lanka’s prime tourist sites, the Royal City of Kandy. Set in the center of lush hills and surrounding a scenic lake, the UNESCO World Heritage Site of Kandy was the last bastion of resistance to colonial rule.

The city is known for distinctive architecture, dance, art and music. Its most famous site is the Dalada Maligawa or the “Temple of the Tooth.” The temple is home to the Buddha’s tooth relic which is an item of great significance to all Buddhists.

The temple was gorgeous from the outside but thanks to the holiday it was literally packed with worshipers, so unfortunately we couldn’t go in. After viewing the temple from the outside and walking around the city for a while, we decided it was time to start heading for the airport since we figured it would take at least another 4 hours to get there.

As the sun set on our long drive, I rehashed our day in my mind and tried to develop on opinion on Sri Lanka as a destination. The closest thing I can compare it to was my visit to India several years ago. The infrastructure is certainly lacking and there is extreme poverty in some areas but as a whole, I enjoyed my day in Sri Lanka. The natural beauty of the country makes up for a lot of its shortcomings.

The one thing I didn’t like (which is an issue in many countries) was the persistence of the hawkers at all the tourist sites. It seemed someone was always trying to get money from us – either to buy something from them or to hire them as a guide. It’s exhausting to be barraged like that for hours on end – feeling like a target everywhere you go because you are clearly a foreigner.

Our driver was pretty good at watching out for us and hovering close by whenever he dropped us off somewhere, so I never felt unsafe. But I did feel like many of the locals were determined to get every last dollar out of the few tourists they have and that’s something that often turns me off about a country.

But to Sri Lanka’s credit, they are a new kid in the tourism block and they’re likely to get better at it as the infrastructure improves with the influx of tourist dollars. All in all, I think I’d go back someday. But I’ll give it a few years…perhaps until that new Starwood hotel is finished, ha!

After 14 hours in and out of a car driving all over Sri Lanka, we were beat when we finally arrived at the airport around 8pm. To make matters worse, our flight to Bangkok didn’t leave until 1am and we couldn’t check in until 3 hours before at 10pm. So we had to find a seat and wait for a bit until we could get to the counter.

When we finally did, we decided to ask how much it would cost to upgrade our coach seats to business class. Knowing we still had a 3-hour wait for our flight and a 4-hour redeye flight to Bangkok, we thought it might be worth it to have access to the lounge and a bigger seat.

When a price was given, we looked at each other and without hesitation decided to go for it. Ten minutes later, we had business class tickets in hand and were headed for the lounge.

The Sri Lankan Airlines lounge turned out to be awesome – complete with massage therapist and free-flowing champagne. We took turns getting free 15-minute massages in the massage room and in no time at all it was time to board our flight.