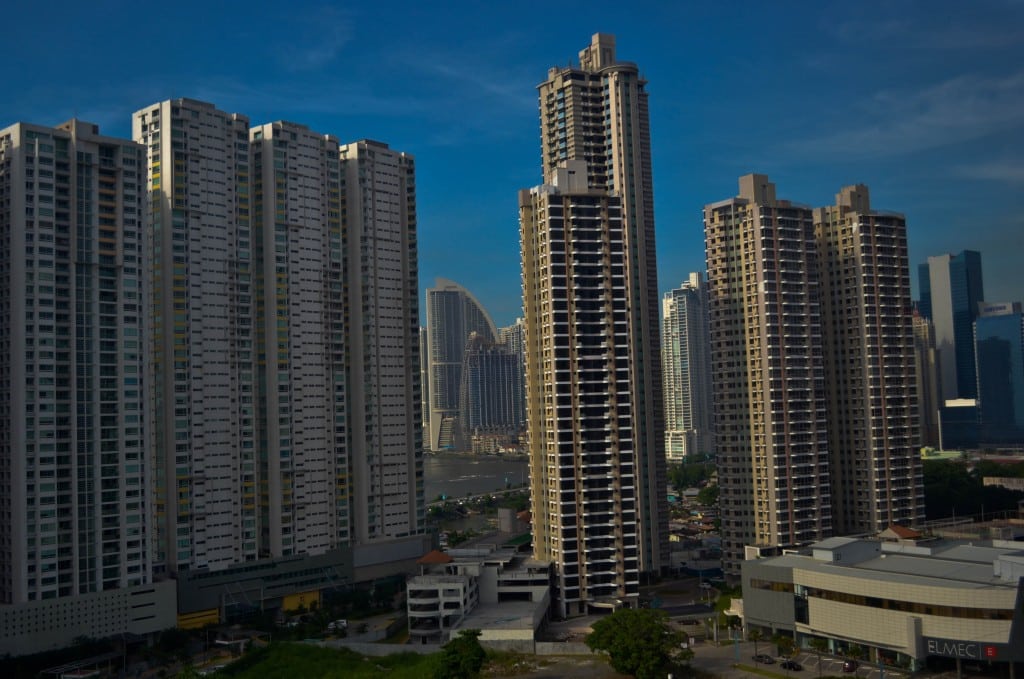 Today, we continue this month-long exploration of Central America in Panama’s historic capital.

After four nights of roughing it in the beautifully remote San Blas islands, my regular travel accomplice Shannon and I are thrilled to return to the luxurious comforts of the plush Sheraton Grand Panama City.

Again, we score an upgrade to a lovely suite with a bathroom bigger than every bathroom in San Blas combined. And after marathon showers we are both starting to feel human again.

After several days off the grid in the San Blas, I spend most of the afternoon catching up on work emails while Shannon explores our options for touring Panama City tomorrow.

Things to do in Panama City

Due to the logistical challenges of visiting the San Blas Islands, we focused most of our planning efforts there. So we’ve hardly given any thought to what we want to do now that we’re back in Panama City.

Obviously, the Panama Canal is the city’s top attraction. But other than that, we’re out of ideas.

After a helpful chat with the concierge, we decide to hire one of the hotel’s drivers for a private tour around the city. It seems like the best way to maximize our limited time.

So, the next morning we have breakfast in the club lounge and then head down to the lobby to meet up with our driver/tour guide for the day, Eduardo.

We assumed we’d be heading straight for the Panama Canal. But Eduardo says his boss will call him as soon as one of the big ships is in line to go through. Otherwise, the view of the canal is not as interesting.

Instead, our first stop is the ruins of the “first city” of Panama Viejo.

Founded in 1519 by the Spanish, it was destroyed by the Welsh pirate Sir Henry Morgan in 1671.

We wander the ruins for a bit and then Eduardo takes us for a walk along the boardwalk lining Balboa Avenue along the bay.

While we’re walking, Eduardo gets the call.

There’s a big ship that will be transiting the Panama Canal in 20 minutes. We make a mad dash to the car, dodging traffic on the 15-minute drive. Upon arrival, we sprint the stairs up to the crowded viewing platform just in time.

But before I continue, a little history on one of the world’s greatest engineering marvels…

The history of the Panama Canal

The idea of building a route to connect the Atlantic and the Pacific dates all the way back to the Spanish conquests in the region in the 16th century.

The French were the first to mount a serious effort to build an all-water route through Panama in 1880, but financial troubles and outbreaks of yellow fever and malaria resulting in the deaths of more than 22,000 workers ultimately led them to abandon the cause in 1889.

However, what the French saw as a failure, the Americans saw as an opportunity and in 1903 the USA approached the French chief engineer to purchase canal concessions.

Though US involvement was initially disputed by Colombia, once Panama gained independence later that year (with US support), the pathway to a second attempt at the canal was born.

On November 18, 1903, a treaty was signed granting the US not just canal concessions but “sovereign rights in perpetuity over the Canal Zone,” an area extending almost 5 miles on either side of the canal. By default, this also gave the US a broad right of intervention into Panamanian affairs.

Construction began anew in 1904 and – despite disease, landslides and difficult weather conditions – was completed in just 10 years. On August 15, 1914, the first ship sailed through the Panama Canal marking an historic event in world history.

As the decades passed, tensions mounted between the US and Panama. In 1977, Jimmy Carter signed the Torrijos-Carter Treaty turning over full operation, administration and maintenance of the canal to Panama at noon on December 31, 1999.

Today, the waterway is managed by the Panama Canal Authority, an autonomous government entity.

How to Visit the Panama Canal

The canal stretches more than 50 miles from the Atlantic to the Pacific. Since its opening in 1914, more than 1 million ships have passed through it.

The highest point between the two oceans is Gatun Lake (85ft above sea level), so the waterway uses a system of locks to raise and lower ships with a series of gates acting as “water elevators.”

The water used to raise and lower the ships is obtained from Gatun Lake entirely by gravity in what might be considered a genius feat of engineering.

The canal has three sets of double-locks. Miraflores and Pedro Miguel on the Pacific side and Gatun on the Atlantic side. The most popular set of locks for visitors (due to its proximity to Panama City) are the Miraflores Locks.

Thirty-nine ships a day pass through the canal and each ship is charged by weight with an average fee of around $30,000. Though ships are constantly passing through the locks, it is often difficult to catch one of the largest vessels to truly appreciate their brilliant design.

Thanks to Eduardo, we arrive just in time to see a giant oil tanker transit the Miraflores Locks.

The whole process from Pacific to Atlantic takes anywhere from 8-10 hours. Watching a ship transit the locks at Miraflores takes us about an hour. It’s a fascinating process to witness and I now have a much better appreciation of this world wonder.

After the ship passes through, we spend a little time in the museum. There’s even a great short film about the history of the canal.

The next stop on our tour is a drive along the scenic causeway connecting the islands of Naos, Perico and Flamenco. The islands are lined with shops and restaurants and have scenic views of the Panama City skyline.

Our final stop on our tour is the Old Town of Casco Viejo.

Three years after the first city was destroyed, the “second city” was established in the area of Casco Viejo. The area is considered the colonial part of the city, while the skyscrapers of modern Panama City tower nearby.

Today, the UNESCO World Heritage Site of Casco Viejo is undergoing a complete revitalization which aims to transform this dilapidated historic center into a new and improved cultural epicenter.

With our full day of touring complete, we thank Eduardo and head back to the hotel. It’s been a terrific day exploring Panama City and I’m thankful we made time to do it in our busy travel schedule.

Next up, the destination Shannon and I are both the most excited about on this summer’s big trip…Ecuador and the Galapagos!