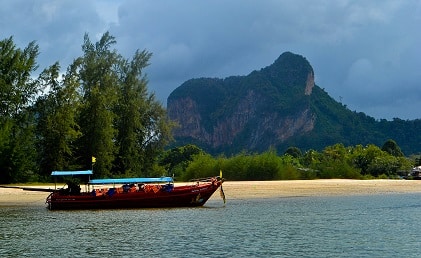 In Thailand’s defense, we knew what we were getting ourselves into. After all, you don’t travel to Southeast Asia during the summer monsoon season without expecting a little rain to fall.

But I’d been to Thailand eight times before (though always in January or February) and never seen it rain even once so I figured, “how bad could it be?” And all things considered, I think we were ultimately pretty lucky.

After a quick transfer in Bangkok from our blissful stay in Bhutan, Shannon and I arrived in the southern province of Krabi Thailand to a setting sun capping what we were told had been a beautiful day. We had two full days ahead in Krabi and planned to spend one relaxing by the pool and the other doing a little island-hopping in the immediate area.

Since it was late when we finally arrived at the beautiful Dusit Thani Krabi Beach Resort, we decided to ease into our Thai beach vacation and spend the next day enjoying the hotel’s pool and beach before selecting a day-trip for the following day.

And we ended up with nearly perfect weather for our first full day. It was a great opportunity to relax and do nothing for once. After almost two weeks of constantly being on the move we had certainly earned it. I mean, this is supposed to be a vacation.

During our luxuriously lazy day of relaxing by the pool, we booked a day-trip to the Phi Phi islands for the next day. I’d visited the Phi Phi islands (where the Leonardo Dicaprio movie “The Beach” was filmed) on my first visit to Krabi all the way back on RTW #3 but since the islands were so beautiful I was really looking forward to venturing out there again.

We awoke on Day 2 to slightly overcast skies but were encouraged by a few breaks in the cloud cover that we hoped would burn off. We boarded a van to the dock at Ao Nang and by 9am we were loaded into a speedboat and making our way toward the islands.

As soon as the boat reached open water and began rising with the waves and crashing down to the water’s surface we realized just how rough the seas were. The ride was very reminiscent of our back-breaking speedboat transfers between Galapagos islands last summer.

Our captain had already told us that we would not be able to snorkel at Maya Bay (the actual beach where the movie was filmed and the highlight of any Phi Phi islands tour) due to high waves. Apparently, a tourist had been injured there the day before so until the seas calmed Maya Bay was off limits.

But we headed out for the islands anyway in hopes of finding a bay calm enough for snorkeling.

We were about half an hour into a very rough ride and nearing Chicken Island when we passed another speedboat headed back for Ao Nang. Both boats slowed and the captains had an exchange in Thai.

To summarize: the other boat had left prior to ours and was already returning due to high waves and an impending storm. And since the other boat was considerably bigger than ours, there was no way we’d be able to make it to Phi Phi.

A bummer, yes, but what can you do?

By 10am we were back at the resort and Shannon decided to reschedule the elephant trek she’d planned for the next day for later that morning. It was a good thing she did, too, because by early afternoon the rains began to fall.

In an effort to maintain your attention through the story of our remaining 36 hours in Krabi, I’ll beta cap the rest of the day for you:

The enthusiastic torrential downpours continued in earnest into the evening making even the short walk off hotel grounds for dinner and our daily massage a challenge. The power flickered throughout the day but on the plus side, by the next morning we had both an ocean and a new lake view. And they didn’t even charge us any extra!

In the morning the rain was still with us so we slept in as late as we could (which wasn’t late), had breakfast and killed a couple of hours in the room before heading to the airport around noon. We were happy to have gotten at least one nice day out of Krabi but it definitely would have been awesome to make it out to the Phi Phi islands before the bad weather moved in to stay.

Luckily, I’ll get another crack at a Thai beach vacation next week in Khao Lak. Here’s hoping for better luck.