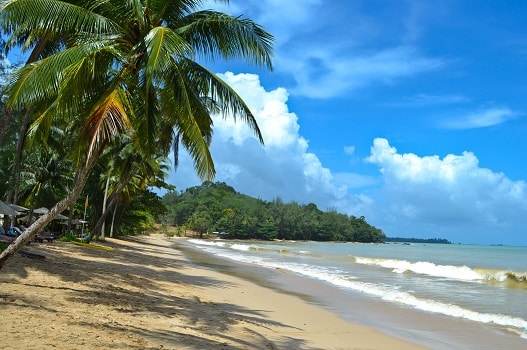 Into every month-long trip, a little pure relaxation must fall…and on this summer’s trip, it fell squarely on the sleepy beach town of Khao Lak Thailand.

Normally, on my round-the-world trips, I make one stop at a Thai beach destination. But since the summer months are the rainy season, I decided I’d better hedge my bets and throw in two beach stops in Thailand figuring it would increase my odds of good weather.

For my second foray into southern Thailand in as many weeks, I chose to fly into Phuket and make the drive north up the coast to the quiet town of Khao Lak Thailand.

I’d stayed at Le Meridien Khao Lak twice on previous trips and always loved it. The only real downside is the hour or so drive from Phuket which means it’s best to have a car.

Not really a downside as far as I’m concerned, considering there is typically nothing relaxing about the crowded beaches of Phuket, certainly not when I was there just a few months ago during Chinese New Year. I swore then that I’d never stay in Phuket-proper again.

The Drive from Phuket to Khao Lak

So when Angela and I touched down around 8:30pm from Bangkok, we knew we had a bit of a drive ahead in the dark. But, since I’d done the drive myself a few times, I remembered it being pretty easy. I was not even worried when the Avis rent-a-car counter didn’t have a map that went as far north as Khao Lak.

I had done this drive before, I was an expert! How hard could it be? Cross the main bridge off Phuket Island and head north up the coast until you see the hotel. Piece of cake.

Angela volunteered to drive since she was fully accustomed to driving on the “wrong” side of the road. That left me as the intrepid navigator. And we were doing just fine, for a while. Chit-chatting away, tuning in radio stations…and completely missing the first turn for Khao Lak.

Unfortunately we missed another turn (again not clearly marked at all) about 30 minutes later that resulted in a lot of backtracking. Apparently, this straightforward drive up the coast is a lot easier in the light of day.

The drive that should have taken us a little over an hour quickly turned into a solid two hours. To keep our spirits up, we stopped in a market for wine, beer and Pringles to celebrate with once we finally arrived.

At nearly 11:00pm, we finally pulled through the gates of Le Meridien Khao Lak. The front desk staff were clearly waiting for us (I’d told them we’d arrive an hour earlier) and seemed a little worried that we arrived so late but they were terrific and checked us right into our upgraded spa villa. I’d stayed in a villa room both times before and I was thrilled they’d upgraded us to one again.

The spacious spa villas have a private terrace with lounge chairs overlooking a pond filled with swans. They also have giant bathrooms complete with garden tub and indoor/outdoor shower. We settled in, unpacked a little and cracked open the still-cold beers in victory.

The next morning we slept in a bit after our late arrival. I got up and went to the gym while Angela headed to breakfast and then had the task of securing us some prime beachfront real estate for the day. By the time I was done at the gym and had breakfast, I found her comfortably seated in a lounge chair by the ocean.

The night before when we’d checked in, we found out that the resort was graciously providing us with two massages and a complimentary dinner at the restaurant of our choice…hooray! So, after leaving the gym, I went by the spa and made our appointments for later that afternoon.

It appeared our day was set, lounging on the beach, followed by afternoon spa appointments and dinner at the resort’s fine dining Thai restaurant, Baan Thai. Could you ask for anything more?

And we even got a bit lucky with the weather that first day. Despite a passing rain shower or two, we had a mostly sunny day. In fact, as it turned out, Angela and I got remarkably similar weather for our 3 days in Khao Lak as Shannon and I had been treated to a few weeks ago in Krabi.

The first day was beautiful, the second day questionable and the last day a complete washout. Not too bad actually, and we certainly made the best of it by getting the most out of the resort’s excellent spa.

That afternoon we thoroughly enjoyed our massages at the spa. So much so, that I booked another treatment for the next day using my points. Back in the villa we cleaned up for dinner and decided to head down to the beach and check out the sunset.

It was still pretty cloudy so our expectations were low but we did get lucky right at the end when the orange glow of the sun peeked below the clouds just before it dipped below the horizon.

Next we headed up to the lobby for the nightly Thai lantern ceremony. We’d noticed it on the activities board earlier in the day and I remembered how beautiful the small ceremony was that I’d seen last year at Le Meridien Koh Samui.

It was a much smaller affair since just a few guests attended but we watched as the staff helped guests unfold their lanterns, light them and make a wish before releasing them into the sky.

It’s really such a beautiful ceremony, I would love to attend one of the larger festivals one day where thousands of lanterns float into the sky. I bet it’s an amazing sight to see. After the lantern ceremony, we had a terrific dinner at Baan Thai and called it a night.

The next day the weather took a turn. I started my day again in the gym and then met Angela poolside after breakfast. We’d discovered that the spa pool area was restricted to 16 and up which meant it was the only part of the resort that was totally kid-free. Spa pool, party of two.

The rest of that day and the next we filled with spa appointments, beach yoga, rain, trips into town for dinner and massages, rain, relaxing poolside sheltered by an umbrella from the rain and, for me, a little work from the villa.

It was a perfectly relaxing couple of days and a much-needed break from our hectic schedule in Myanmar. The Le Meridien Khao Lak is a spectacular property on a lovely stretch of beach and I have no doubt I’ll return to the Khao Lak area again.

But for now, it was time to say goodbye to Angela and head back to China on my own for my long-awaiting stop in Tibet. Big thanks to Ang for joining me for the past week in Myanmar and Thailand.

It was so great to travel together again after meeting in Antarctica earlier this year. Hopefully she’ll be game to hit more random destinations with me in the future!