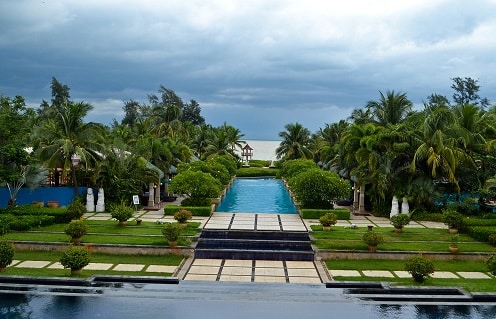 I had originally planned to spend 4 nights on the Chinese island of Hainan, known as the “Hawaii of the East.” However, the change in plans regarding Tibet meant cutting my stay down to just two nights. Flight options from Lhasa also meant changing Hainan airports to fly into smaller Haikou instead of the more popular Sanya.

But since there was a perfectly posh-looking Sheraton resort located in Haikou, I decided to give it a try.

After a somewhat obnoxious travel day from Lhasa which involved a plane change in Chongqing and two flight delays, I finally arrived in Haikou Hainan, exited the airport to the taxi stand and was surrounded by 5 drivers shoving their iPhone calculators in my face to show me how much the drive to the hotel would cost.

It was the Chinese version of “Let’s Make a Deal.”

I knew from the hotel’s website that the ride should cost approximately 120¥ but the drivers’ opening bids were in all the 300¥ neighborhood. Sigh. Do we really have to play this game every time I arrive in a new destination?

Honestly, people, it’s exhausting. Do I have “I’m a tourist, rip me off!” stenciled on my forehead? Taxi drivers of the world, for God’s sake just turn on your meter and call it a day. End of rant (but stay tuned, I feel another one coming on).

After extended negotiations that ultimately yielded a fair price for the ride to the hotel, I finally arrived at the Sheraton Haikou Resort just before 8pm. The hotel upgraded me to a fantastic suite, continuing my glorious “suite streak” on this trip (which was moderately interrupted in Myanmar but has continued in force since).

I had a conference call scheduled at 2am local time so I decided I’d better get some work done since it was still during the Friday business day in the States. My first week of the ESPN football season (my real job) is coming up quickly at the end of August and I had quite a bit of work to do to prep for my first game in Houston.

After wrapping up the call at 2:30am, I slept in the next morning. I only had one full day in Hainan and I’d hoped to get out of the resort and explore the island a little. I was dying to see why they called it the Hawaii of the East since so far I wasn’t making the connection.

But I awoke to rain that didn’t seem to want to stop so I took a walk around the hotel grounds and down to the beach and then spent most of the day working from my room.

Though the resort itself was spectacular, the beach was nothing to write home about. And there were the high-rises of a big city skyline visible in the distance. Not very Hawaii-like at all if you ask me.

Of course, the more popular side of the island is the area around Sanya and I imagine there are probably some great beaches over there but I definitely didn’t see anything worthy of the Hawaii title near my resort. I guess next time I’ll have to check out one of the many Sanya resorts and give Hainan another try.

My apologies that all the pictures in the photo gallery are of the Sheraton resort, I didn’t get to see much else. Admittedly, I have failed as a travel blogger in this instance. I promise to try harder next time.

A few parting words about travelling in China…

The next morning it was already time to head back to the airport for the two-flight trip through Guangzhou back to Bangkok. This sounds terrible but I am really tiring of my domestic Chinese flights. Of course, I say this with all due respect to the obvious cultural differences.

But now that I have half a dozen domestic Chinese flights under my belt in the last few weeks (Air China, China Southern and China Eastern) and have visited more random Chinese airports than I care to discuss (Chengdu, Kunming and Chongquing) I feel compelled to share a few thoughts on the differences between air travel within China and air travel in the rest of the world:

1) Check-in: When you get to the check-in counter and see that there are only 5-10 people in front you, don’t be fooled. When the counter opens and the line starts moving each one of those 5-10 people has a family of 20 resting comfortably somewhere else who will join the line in front of you just as soon as it starts to move.

2) Security: You’ll see all of those same family members again at security yet somehow they will find even more friends, extended family members, acquaintances, etc. that will also need to cut in front of you. When arriving at security, instead of joining a nice, orderly, single file line some (again I stress, not all) Chinese people will simply scan the line in search of a friend or long-lost cousin and, again, cut right in front of you. Get to the airport early, it will take you twice as long to get through security because of this. And no, the security people monitoring the line don’t seem to care…no matter how loudly you sigh or how many exasperated faces you make from the back of the line.

3) At the Gate: The airport free wifi is not for you, it is only for people with Chinese cell phones. In order to use it, you have to provide a Chinese mobile number to receive a code by text. International cell phone? No wifi for you.

4) At the Gate – Part 2: No matter how modern the airport (and most are incredibly modern), when you open the door of the women’s bathroom stall you will inevitably find a hole in the floor where the toilet should be. This mystifies me. I understand the “squatty toilet situation” in older buildings or tourist sites but this is a shiny new airport. I can only assume Chinese people prefer this to an actual toilet. (If any of you reading this can provide some clarity on this issue for me please sound off in the comments.) Meanwhile, just across the East China Sea, the Japanese are making toilets that will freshen up your make-up, hold your calls and do your taxes while you’re in the stall, yet China still perseveres with a hole in the ground. What gives? (Western tip: Always check the handicapped stall. If there is an actual toilet in this bathroom, that’s where they’re hiding it.)

5) On the plane: This is the worst offense and borders on a serious safety issue. When the plane lands, roughly half of the passengers eject from their seats as if on fire, fumble for their belongings in the overhead bin and rush to the boarding door to be first off the plane…while we are still taxiing to the gate. This is despite repeated announcements and physical attempts by flight attendants asking them to return to their seats and fasten their seat belts. They completely disregard the flight attendants’ instructions and I can’t understand for the life of me how they get away with that. If they tried that little maneuver in the US, one word from the flight attendant would result in an armed welcoming committee at the boarding door (if they’re lucky) or the boot of an air marshal on their throat (if they’re not).

I get that there are obvious cultural differences at work here and I try my best not to be annoyed by things like disrespect for orderly line formation and to remain jovial in the face of inadequate modern plumbing, but things that threaten the safety of the rest of us on board fall outside the boundaries of tolerable cultural variations. If the plane stops short on the runway and one of those rule-breakers falls on me with all their luggage I’m gonna be ticked.

Meltdown concluded. My apologies to the good, decent, single-file-line-respecting, Hello-Kitty-abhorring Chinese people. I have no doubt you are all fine and lovely people. I blame this entire post on an acute lack of sleep.

This trip is coming to a close all too quickly. I can’t believe I have just three days left in Bangkok before returning home to reality…I’m not ready! (to go home that is, for the moment I’m definitely ready to get out of China.)

Oh well, ready or not, Bangkok here I come!