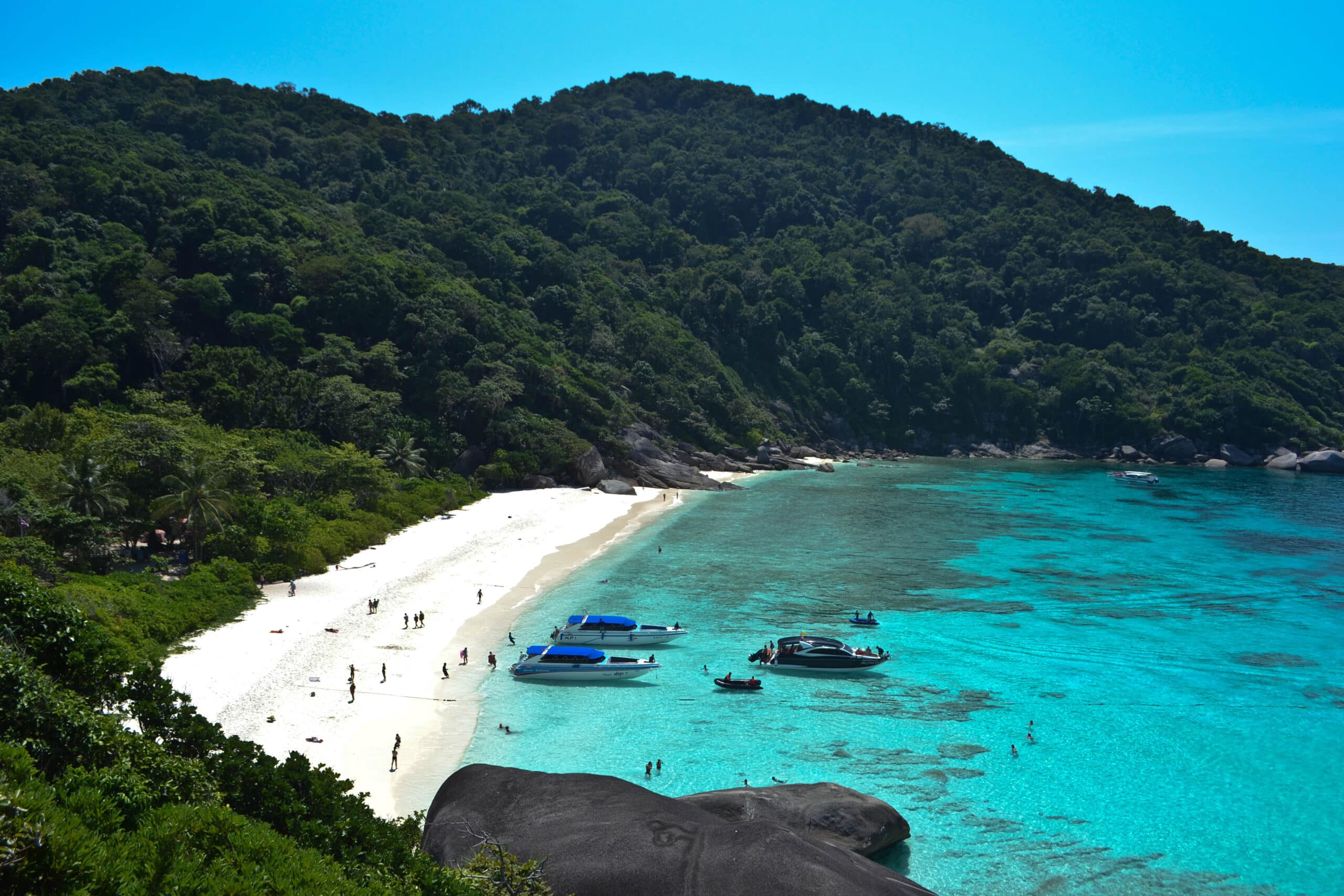 I love Phuket, I really do. Honestly, it’s hard to find any part of Thailand that I don’t love.

But if you also love Phuket, do yourself a favor and never go over Chinese New Year.

On past visits to Phuket, I’ve typically stayed farther afield, like the Khao Lak area. It’s off-island and a ninety minute drive up the mainland coast.

On the few occasions when I have stayed on the actual island of Phuket, they’ve typically been brief trips where I lounged on the beach and rarely left the hotel grounds.

Read More: Back to the Beach…Phuket Thailand

This time I have four nights, a rental car and plans to explore the island in more depth. Unfortunately, my timing is lousy.

For those of you who haven’t been in Asia over Chinese New Year, allow me to provide a helpful overview. First, it’s by far the biggest travel holiday for all of the Asian continent. And second, it goes on for (seemingly) weeks.

This year, the actual New Year falls on Sunday, right in the middle of my 4-day stay.

With my annual January/February round-the-world trips, I am almost always somewhere within Asia over Chinese New Year. But I’ve typically been in cities: Hong Kong, Bangkok, Singapore.

Cities are fine over the holiday because everyone gets out of the cities. And now I know where they go: Phuket.

From the minute I step off the flight at the airport, I realize this is going to be a challenge.

The immigration lines are out the door and it takes more than an hour to get through. I pick up my rental car and locate my hotel – the beautiful Hilton Phuket Arcadia Resort & Spa – on the map.

I’m told it’s about 45-minutes away. But the traffic on the island is so dense it actually takes twice that long. I am so happy to finally arrive at the hotel I nearly swear I won’t leave again until it’s time to fly out.

But by the next day I realize that might have been a little dramatic.

Not to mention there are a gazillion people at my hotel, so how much worse can it be to go out? I spend the first day enjoying the hotel’s prime position on Karon Beach and the comfort of my suite.

My whole plan for the weekend is to book a couple of island-hopping day trips. I’m hoping to visit some of the outer islands that I haven’t seen before.

So I head down to the concierge desk to peruse the options for the next few days.

For day two, I book a trip to as far as I can get in a single day, the Similan Islands.

It’s a 6:30am pick-up at my hotel for what will be a full 12-hour day. My hope is that maybe the rest of the tourist throngs aren’t up for the 2-hour boat ride to get there.

We are packed in like sardines on a speedboat for the rough ride out to the islands. Two people quickly succumb to the motion and spend most of the ride hanging off the back of the boat. I feel terrible for them. What a miserable thing to pay for.

Each of the nine islands has both a name and a number but they are most commonly referred to by their numbers. Today, we will make stops at Island No. 4 and Island No. 8 with some snorkeling thrown in between.

By the time we reach our first of the Similan Islands, Island No. 4, I’m glad I’ve made the trip.

Yes, the island is packed with tourists. But, darn it, it’s just so incredibly beautiful. I hike up a steep trail to a very high lookout point and then spend some quality time on the beach. Then we return to the boat to head just offshore to our first snorkeling spot.

On the ride over, one of the Russians in our group (they make up more than half of the group of 15) pulls out an entire bottle of vodka from his bag. He starts pouring shots in plastic cups for everyone. Straight. He’s a jovial bloke and won’t take no for an answer since he speaks no English.

True story: Two summers ago I was on a bus in the Balkans with some Russians and they also pulled a bottle of vodka from their bag and insisted everyone share in a shot. My point here is that stereotypes exist for a reason. You’ve gotta love their enthusiasm, if not their beverage of choice.

After shots of vodka all-round, we arrive at our snorkeling spot.

The Similan Islands are known for some of the best diving in the world. But I have to say the snorkeling isn’t all that impressive. I guess the good stuff is farther down.

Next, we move on to Island No. 8 and it’s the most impressive of all.

The island is anchored by the magnificent Sail Rock. It’s possible to climb up to Sail Rock and get a panoramic view over the island and the turquoise sea.

We have lunch first and then make our way up to the top of Sail Rock. The climb is much easier than the one I just did on Island No. 4. That one involved hauling myself up sheer rock faces using a rope while wearing completely inappropriate footwear.

The view from the top of Sail Rock is definitely worth the easy climb.

And despite the obvious lack of railings or any safety precautions – I would love to know how many people a year fall off this rock, it is bound to happen – I thoroughly enjoy it.

After some time on the beach and swimming in the gorgeous Andaman sea, it’s time to head to our second and final snorkeling spot.

Visibility-wise, this one is equally as disappointing as the first. But just being in the water feels great since it’s 90-something degrees outside. And by now we are all on our second shot of vodka thanks to the Russians.

By 4pm it’s time to pile back in the boat for the 2-hour choppy ride back.

The next day I want to do another day trip but absolutely everything is sold out. I take it as a sign and spend the day by the pool.

For my last day, I book a half-day trip to the nearby island of Khai Nok that includes snorkeling at neighboring Coral Island.

Once again, it’s a stunning beach but it’s completely packed with umbrellas and Japanese tourists. Not exactly relaxing.

It’s so frustrating to be in such a gorgeous place that is so overrun with tourists. Honestly, it’s completely impossible to appreciate it. There seems to be no regulation on the number of “independent” speedboat operators or visitors on a certain island.

Chinese New Year in Phuket is literally the opposite of what I just left behind on Nikoi Island.

I’ve gone from complete peace and solitude to a sea of people and fireworks at 1:00am. I literally can’t sneeze without hitting a Japanese tour group.

But I do think the holiday weekend is to blame.

I’ve been to Phuket several times before and never seen it this crowded. Just goes to show, you can’t win ‘em all. I still managed to have a lovely time and Phuket is such a fantastic part of Thailand.

Hopefully next time I will be smart enough to plan my dates a little better.