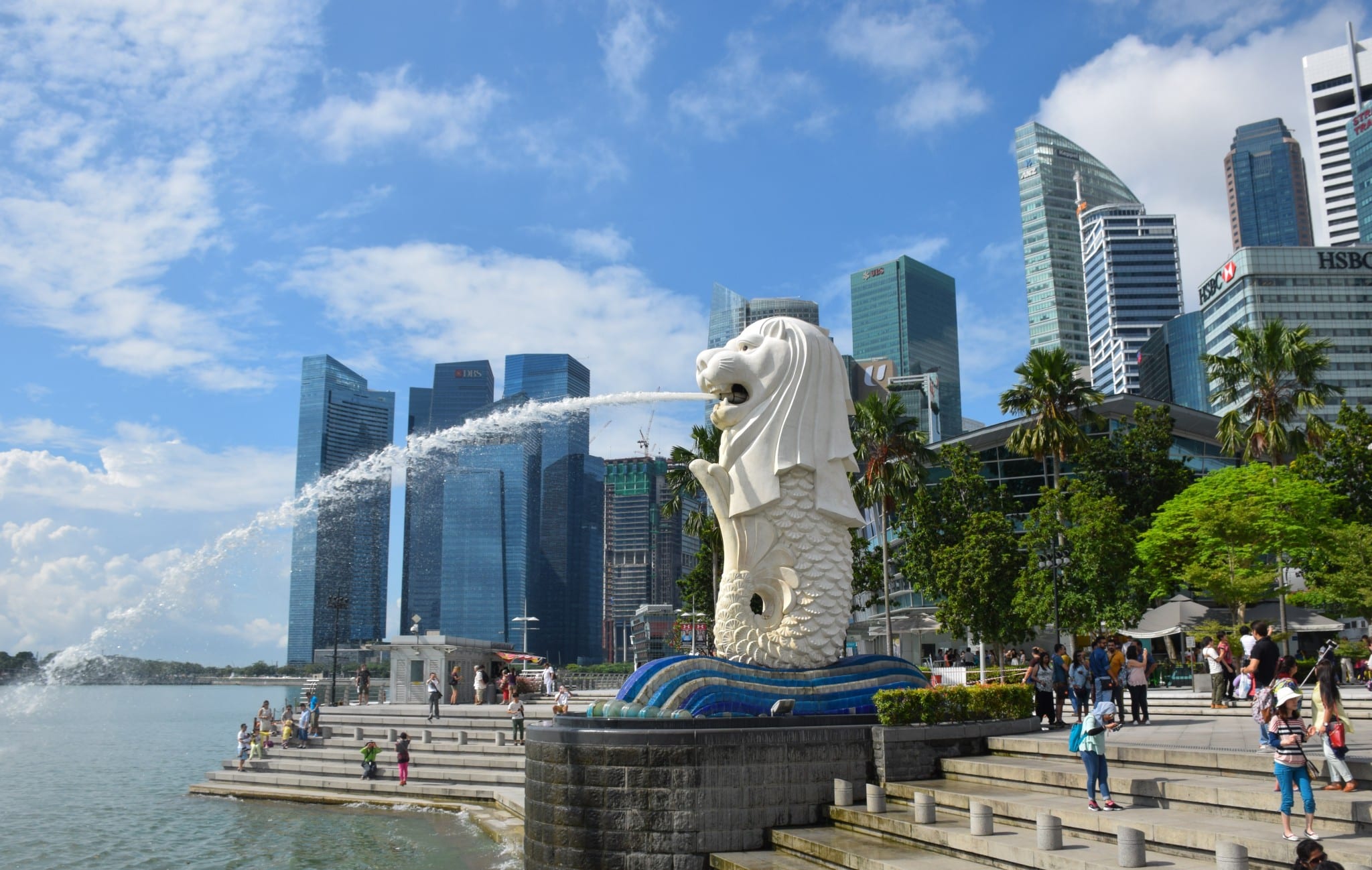 I arrived in Singapore at 10am and was immediately impressed with Changi Airport.

Not only is it clean and beautiful, it is easily navigable and everything is clearly labeled in English, Chinese, Thai, Malay and Japanese – and for the first time in a while, English is listed first.

I easily made my way to the MRT train station inside the airport where a helpful attendant was waiting next to the automatic ticket machines to assist visitors in purchasing a ticket to the right destination. (This is a nice touch since usually you’re on your own with these machines – I typically end up using the ticket window to ensure I’m buying the right ticket.)

Though the trip to my hotel on Orchard Road required two train changes, I was thoroughly prepped by the helpful ticket person so I had no problems getting to the Orchard Road Station situated only 2 blocks from my hotel.

Singapore is tiny as far as world capitals go. The island city-state’s population is made up mostly of Chinese (3/4 of the city’s population), then Malays and a small percentage of Indians.

Every aspect of life in Singapore is carefully controlled and monitored by a government determined to strengthen its position as Asia’s premier financial center and manufacturing and shipping hub.

The government has recently relaxed its strict campaign to keep the city clean and its citizens socially responsible. Though you can still receive a fine of up to $1,000 for littering, jaywalking or even failure to flush a public toilet, they have removed the long-standing ban on chewing gum in the city (seriously, until last year, you couldn’t even buy gum in Singapore).

I spent most of the afternoon perusing the countless shops along Orchard Road and, after walking around for about 4 hours, walked back to the hotel to freshen up.

I had big plans for my first night in Singapore. I’d read that the Night Safari offered by the Singapore Zoo was a prime attraction here so I definitely wanted to check that out during my stay.

Or perhaps a visit to one of the many bars and restaurants that line Boat Quay or Clark Quay along the Singapore River? Yes, I had big plans for my first night in Singapore…what actually happened was that I laid down on the bed in my room around 6pm (once again “just for a minute”) and promptly fell asleep.

New resolution: stop thinking I can lie down just for a minute. Clearly this is not working for me. It’s ridiculous really, at night when I should be exhausted, I can’t sleep. During the day when I should be exploring the city, I’m beat. I’ve been off Eastern US time for 3 weeks, I’ve tried strategic use of Ambien and I did fine for the first two weeks; I really think I should be adjusted by now.

But since India, nothing is working anymore. I guess this is the downside of going RTW in 30 days versus 30 weeks. Ambien schmambien, I give up…perhaps there are some lovely overnight markets I can visit.

The good news is after a 10 hour “nap” I’m ready to spend some quality time getting to know Singapore.  My first stop is the fabulous Singapore Zoo.

Now, I’m not really a big zoo person but Singapore boasts one of the best zoos in the world so I decided I was duty-bound to check it out. As it turns out, I spent a terrific morning wandering through the zoo and seeing all of the animals up close and personal.

The zoo has what it calls “open” enclosures and animals are confined only by hidden walls and ditches. It really makes you feel like you could walk right up and touch the animals if you wanted to. There are lions, elephants, white tigers, polar bears, giraffes, penguins and the best primate reserve in the world.

The highlight for me was the mommy orangutan with her tiny 4 month-old baby.  The baby was clinging tightly and crawling all over its momma and the zoo keeper said they do this for roughly the first 18 months. (Roughly?? Geez, she doesn’t get a minute to herself for 18 months!??!)

Very cute, though, I got several good pictures of them.

After an enjoyable morning at the zoo, I took a taxi back to the city to see the famous Raffles Hotel and have a Singapore Sling in the bar where they were invented – the Long Bar.

The Raffles Hotel is truly the epitome of colonial style and was established in 1887 to serve the needs of traders and travelers who began coming to Singapore in growing numbers after the opening of the Suez Canal in 1869.

The hotel was stunning and the Sling was good, though of course wildly overpriced, but you’ve gotta do it, right?

My next stop is the waterfront park that houses the picturesque “Merlion” fountain.  The combination Mermaid-Lion statue is the national symbol of Singapore representing both its strength and its reality as a water-bound nation.

After my stop at the fountain, it’s getting close to dinner time. So I decide to follow the river into the city up to the revitalized waterfront areas of Boat Quay and Clarke Quay.

Both are lined with bars and restaurants and after walking around in the Singapore heat all day (the island is only 62 miles from the equator), I’m ready for a cold adult beverage.

I wander through both areas and finally decide to park it at Harry’s Bar in Boat Quay. It has a beautiful waterfront spot and Harry’s is an Italian institution, I’ve been there in both Florence and Rome. I sat down at a table right on the water and ordered a Tiger beer.

I then powered up my laptop to write a little about my day and hopefully piggyback onto a wireless network somewhere. I was pleased to see that no less than 27 different wireless networks were detected by my computer.

Of course, the majority of them were security-enabled but at least 5 of them weren’t and I was easily able to connect free of charge. I don’t think my computer has ever detected 27 different wireless networks at one time before…amazing.

As it turned out, I sat down just in time to escape an afternoon thunderstorm that moved through shortly after. It cleared quickly and once the sun set, those of us along the waterfront were treated to an impromptu evening fireworks display over the river to kick off the Chinese New Year celebration.

I met a rowdy group of Australians from Brisbane seated next to me at Harry’s. They were in town for the New Year and heading to a festival in the park that opened with the fireworks display we witnessed earlier. I went over and wandered around with them for a while before calling it a night around midnight.

They were fun but I think they had been at Harry’s a lot longer than I was and they were light years ahead of me in the energy department. Plus I had a 6am flight to Hong Kong and a wake-up call set for 3:45am.