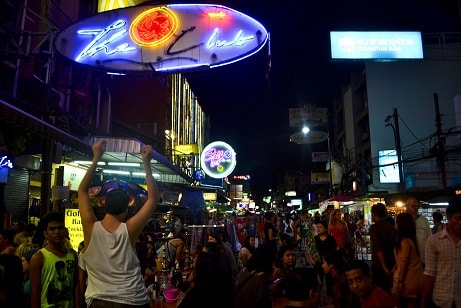 After two weeks on the road around the Himalayas, Bangkok was Shannon’s final stop of the Asian summer tour before she headed home and my friend Angela (whom I met on the Antarctica cruise in January) flew in from Australia. Ang would be joining me for the next 10 days of the trip.

I’ve been to Bangkok on each of my round-the-world trips so this was my 9th visit to this wonderful city. We arrived at Bangkok’s domestic airport (DMK) from Krabi at 5pm and by 5:30pm were in a taxi and headed to my favorite home in the city, the Royal Orchid Sheraton Hotel & Towers.

Unfortunately, we hit the worst traffic I’ve ever seen in Bangkok and it took us 2 ½ hours to get to the hotel. I’ve never had an airport trip take longer than 45 minutes from either airport but I guess I’ve never landed during evening rush hour before.

The odd thing about Bangkok traffic is the system of traffic lights, some of which can remain red for a solid 20 minutes (we were on the receiving end of those extended red lights a number of times).

Finally, just before 8pm we arrived at the Sheraton, just in time to enjoy a glass of wine from the Towers Lounge overlooking the Chao Phraya River.

Since it was Shannon’s first visit to Bangkok, she had a big day of temple-hopping planned for the next day while I had a more urgent matter on my agenda – a visit to the Myanmar embassy to apply for a same-day visa for my Sunday flight to Yangon.

With the length of time it took to receive our Chinese visas and no expediting option available when applying for a Myanmar visa from the US, I simply ran out of time to obtain it before departure.

I’d read that same-day Myanmar visas were easily available at their Bangkok embassy so I’d researched it thoroughly and was totally prepared. I’ve recapped the entire process here for anyone looking to do the same thing but suffice it to say, it could not have been easier!

We departed the hotel at 8am – Shannon on the river boat headed for Wat Arun and Wat Pho and me in a taxi bound for the embassy. We’d planned to meet up at Pier N8 by Wat Pho at 10:30am after I’d dropped off my application and spend a few hours touring around together before I had to return at 3:30pm to pick up my shiny new visa.

Our plan worked perfectly and by the time I arrived at the pier Shannon had already checked Wat Arun and Wat Pho off her Bangkok list. We got back on the next orange-flagged commuter boat (15 Baht versus the overpriced Tourist Boat at 150 Baht) and got off at Pier N13 near Khao San Road.

I’ve said it before but it bears repeating, I just love Khao San Road. And I especially love Soi Rambuttri just a block away, it’s sort of a kinder, gentler Khao San and where I spend much of my time when I’m in the city. Along these two famous roads you’ve got countless street food stands, massage places, fish spas, book stores, souvenir stands, pharmacies, you name it.

It’s one-stop shopping for all your Bangkok needs and we were currently in need of our first massage of the day.

Shannon also wanted to try the fish spa and since I hadn’t had fish nibbling at my feet since my 3rd RTW trip, I decided to join her prior to our massages. An hour and 15 minutes later we were good as new – totally relaxed and with soft feet. Next on the agenda, a used book store for new reading material and then lunch from a pad Thai cart.

We followed up our delicious lunch with one of my favorite Bangkok pastimes – a cold Singha from the 7-11 and a foot massage. Seriously, could you ask for anything more from a city?

After our 2nd massage of the day, it was time for us to hop back on the boat and part ways – me to pick up my visa and Shannon to visit the Grand Palace before closing at 3:30pm. We reconvened back at the hotel in time to clean up and hit the Sheraton’s excellent Tower’s Lounge by 6pm.

That night we decided to try our luck again with Bangkok traffic to make a trip over to the bar at the posh Lebua State Tower, featured in the movie, The Hangover. I’d never been there and it was on Shannon’s list of things to do.

Traffic was just as horrendous as the night before and it took us far longer than it should have to reach the bar but it was worth it for the completely amazing views over downtown.

Of course, the cheapest drink on the menu was a $12 beer so we kept our visit short and to the point.

Next, it was on to another Bangkok attraction I’d never experienced, the Patpong district. Patpong is Bangkok’s red-light district and it caters largely to tourists. Since I’m typically traveling solo when in Bangkok and have zero interest in this kind of scene, this part of Bangkok has not previously held any appeal for me. But, operating under the “when in Rome” theory, we decided to check it out.

And it was pretty much as smarmy as I’d expected. A decent night market surrounded by strip clubs with men outside each trying to sell us tickets to a “ping pong” show (don’t ask) and making generally inappropriate comments.

As one of Shannon’s friends had said when recommending an evening of people-watching there, “It makes the Vegas strip look like the Mormon Tabernacle Choir.” I couldn’t come up with a more perfect analogy so I’m stealing that one.

To be frank, I didn’t care for it at all. It’s not what I come to Bangkok for (though I’m sure some people do) and I didn’t want to be in any way supporting the city’s sex trade. So after a little people-watching and a walk through the market, we abandoned the seedy Patpong neighborhood in search of a 7-11 for a Singha and a foot massage place to enjoy our third massage of the day (which was divine).

Day 2 in Bangkok – The Chatuchak Market

For our last full day in Bangkok (and Shannon’s last day of the trip) we decided to visit the Chatuchak weekend market for a little shopping. Covering more than 250 acres and featuring 15,000+ stalls, Chatuchak is the world’s largest weekend market and it’s a must-see when in Bangkok over a weekend.

We spent a few hours walking the stalls and mostly getting lost in the myriad of winding aisles. Then we bought a few souvenirs and a couple of cold Singhas and found a foot massage place. After all, you can’t squeeze three massages into a single day in if you don’t start early.

After massage #1 we decided to head back to Soi Rambuttri for a late lunch (and one more massage) and then dodged a massive afternoon thunderstorm on our way back to the hotel. Angela was landing at 4:30pm and we wanted to be back to the hotel in time to meet her.

Ang made good time to the hotel and by 6:30pm we were all comfortably seated in the Towers Lounge with a glass of wine and a view of the river. Shannon was headed home in the morning on a ridiculously early 5:50am flight and Ang and I were bound for Yangon, Myanmar also on an early (yet less obnoxiously so) flight.

The Nightlife on Khao San Road

At 8:00pm as we were finishing our 2nd glasses of wine it would have been an easy (and, in fact, perhaps more sensible) thing to call it a night. Especially with a 2:45am wake-up call set for Shannon. But it was her last night of the trip and the only night we’d all be together so we decided to check out one last thing I’d neglected to investigate on previous Bangkok trips – Khao San Road on a Saturday night.

So back in a taxi we went and into the evening chaos of Bangkok’s backpacker hub. I love Khao San by day and by night it’s an even more entertaining spectacle. Khao San may still be a bit risqué by some standards but compared to Patpong the night before it was like Sunday mass.

We walked for a bit, grooving to the thumping music and recoiling from the men trying to sell us scorpions on a stick (does anyone actually buy those things?), before settling into a front row table at Golf Bar and ordering drinks.

We spent a solid hour enjoying some top-notch people-watching and then decided to introduce Ang to the three-massage-a-day Bangkok tradition. We swung by the 7-11 (there’s one on every corner) for beers and then held down recliners at a foot massage place to support the local economy one last time.

It was a great night and I’m glad we rallied since I’m not sure I’d ever go down there when in Bangkok on my own and it was a fun sight to see. We paid for it in the morning, though – Shannon got about an hour of sleep and Ang and I got maybe three.

I said goodbye to Shannon at 3am as she headed downstairs to catch her cab to the airport. We had an amazing couple of weeks traveling the Himalayas and I’m thrilled she was once again able to join in my summer fun. She’s a terrific travel buddy and welcome on my trips anytime!

Ang and I re-convened in the lobby at 6:00am and groggily headed for the airport. For once, there was no traffic.