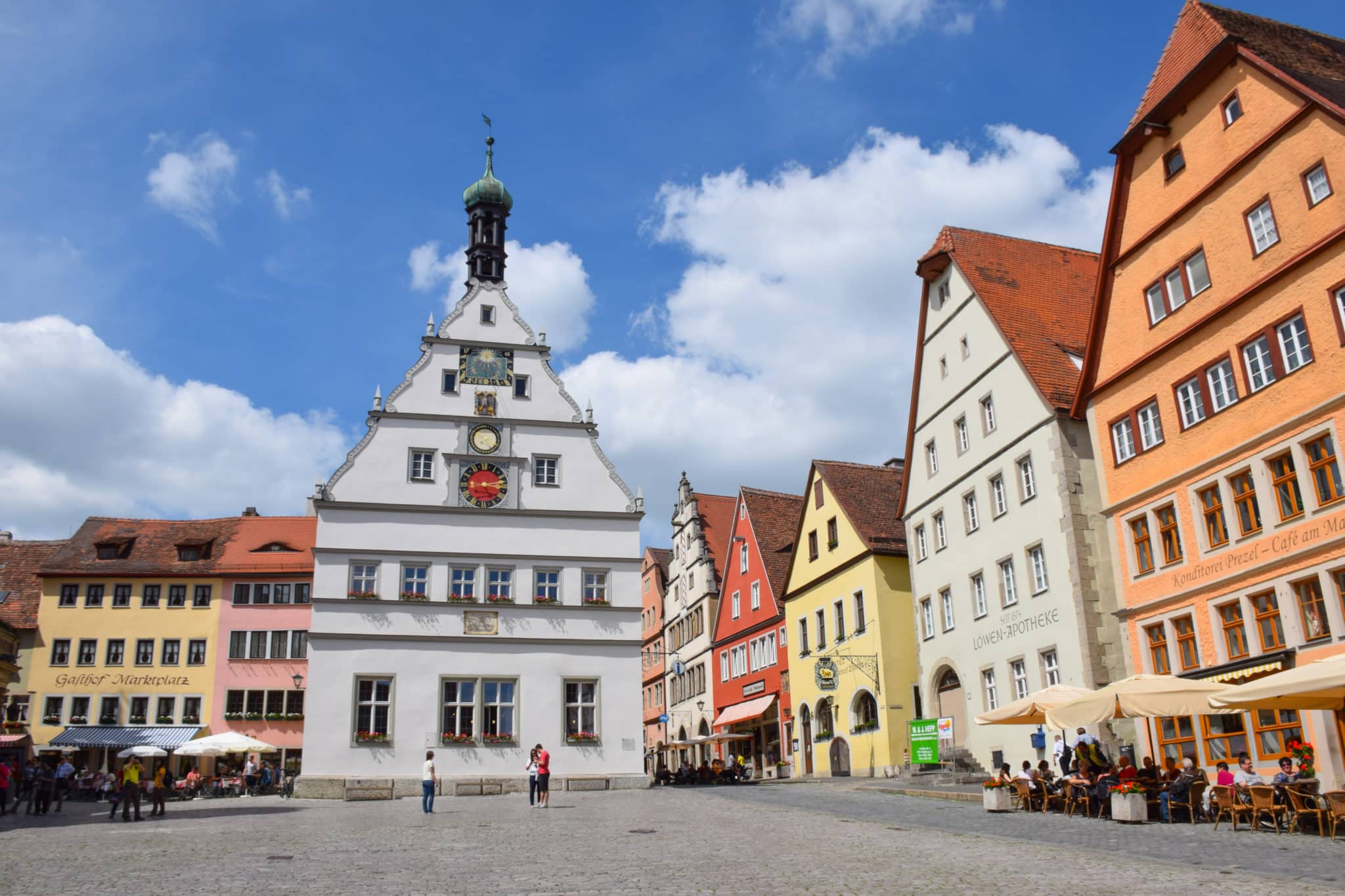 It’s one of the loveliest medieval towns in all of Europe and a charming stop on any visit to Germany. Translated as “Red Fort on the River Tauber,” Rothenburg ob der Tauber is the town you envision when you close your eyes and think of storybook Germany.

In fact, the whole village looks a bit like a movie set. Especially at Christmas time when the Rothenburg Christmas Market turns the whole town into a winter wonderland.

Yet these narrow, cobbled lanes lined with half-timbered houses are steeped in more than 1,000 years of fascinating history.

Considered a “Free Imperial City” for nearly 500 hundred years, the status allowed the citizens of Rothenburg ob der Tauber to enjoy a finer standard of living than those in neighboring towns. Franconian Rothenburg was reluctantly annexed to the Bavarian Kingdom in 1802.

While still part of Bavaria today, many residents identify more as Franconian than Bavarian.

Though a portion of the city went up in flames during a WWII bombing attack, it was largely spared due to its historic significance (and the US Assistant Secretary of War, John J. McCloy, who knew of the town’s beauty). After the war, international financial support helped to fully restore the destroyed areas. Today, stringent preservation laws protect its historic center.

In the warmer months, flower boxes hanging from every window overflow with color. In the winter months, the Rothenburg Christmas Markets are world-famous.

It’s no wonder tourists flock to Rothenburg, but despite that, it’s still worthy of a visit!

How to Get to Rothenburg ob der Tauber

Located closest to Nuremberg, Rothenburg ob der Tauber (all words in the town’s name are important as there is more than one “Rothenburg” in Germany!) is easily reachable from many of Germany’s major cities by train or car.

Since it’s just a 90-minute drive from where we’re currently living near Regensburg, we visit often, especially when we have guests in town!

If you drive, there are plenty of parking spaces available in lots just outside the city walls. For instance, we generally park in Parkplatz P4 or P5 – you can put that directly into your GPS. If you take the train, the historic town center is less than a 10-minute walk from the train station.

With its diminutive size and close proximity to larger cities, it’s tempting to make this fairy tale village a day trip, but I’d argue it’s well worth an overnight stay.

Romantik Hotel Markusturm – Located in the heart of the old town just a short stroll from the main square, this is my favorite choice in town. On a recent stay, our room was huge and had a postcard-worthy view over the red-tiled roofs and the active pedestrian street below. The staff were extremely helpful, and the breakfast was delicious.

Hotel Herrnschloesschen – If you’re looking for a bit of a splurge, this luxury boutique hotel is top-rated both for its rooms and especially its personalized service. Also located within the city walls, rooms are spacious, smartly decorated and many have lovely town views (hint: book the Butterfly room for a picturesque view of the Franciscan Monastery across the street). The hotel also features a Baroque Garden and a sauna. Another perk: drinks from the minibar are included in the room rate.

Altfrankische Weinstube – There are many budget-friendly options in Rothenburg but if you’re on a tighter budget, this small, historic guesthouse is the top choice. Though the rooms are more compact than the hotels mentioned above, the old town location is excellent, and the service is friendly and accommodating.

In addition, all of the above offer free wi-fi throughout the hotel and (despite their prime locations within the city walls) they do offer parking nearby.

With its petite footprint, Rothenburg is best explored on foot. Here are a few of the top sights around town:

Located in the main Market Square, the Town Hall building features both Gothic (on the rear) and Renaissance (on the front) architectural styles. Climb the 200-foot tower for the best aerial views over the town (it’s a steep climb but worth it!).

Now the Tourist Information Office, this building anchors the Market Square and was once a tavern exclusive to city counsillors (lest they drink in public and spill town secrets!). From 10am-10pm, every hour on the hour, figures emerge from two doors on the face of the astronomical clock to reenact the story of a brave mayor who once saved the city from total destruction by drinking nearly a gallon of wine (more on this local legend during the Night Watchman’s tour!).

Best appreciated with a guide or rented audio guide to see the highlights, this impressive church is best known for its magnificent “Altarpiece of the Holy Blood.”

From the Market Square, stroll down Schmiedgasse past quaint shops and aromatic bakeries to Rothenburg’s postcard-perfect photo op, the Plönlein (Little Square) and Siebers Tower, dating back to 1385.

I’ll admit, the first room of this museum made me wonder if I had the stomach to continue. Featuring some scary examples of execution devices and instruments of torture, this museum is Europe’s largest exhibition of the history of crime and punishment.

However, if you survive the first few gruesome displays, it gets much tamer and even amusing at times. For example, a figure eight device worn by “quarrelsome couples” in the town square until marital differences were resolved. Overall, one of the town’s most unique attractions and well worth a couple of hours.

Though the original imperial castle was destroyed by an earthquake in 1356, the impressive outer gate remains. The nearby Castle Garden has stunning views of both the Tauber Valley and the old town.

The whole town looks like a living Christmas card in the winter months so it’s no surprise that Christmas reigns supreme within these city walls. Find out how Christmas began at the delightfully-ornate Käthe Wohlfahrt Christmas Museum.

And if you’ve always wanted to visit a real German Christmas Market, the Rothenburg Christmas Market is one of Germany’s oldest and best each winter. Shop elaborately decorated gift stalls set against a medieval backdrop while sipping mulled wine. Simply magical!

For the best views over Rothenburg, climb the 220 twisting steps up to the Town Hall Tower’s observation platform. Because the platform is small, only 20 people are allowed up at one time. Access is controlled by a turnstile on the ground level.

The views are spectacular, but the climb and the tiny, often windy platform are not for the squeamish. And it’s definitely challenging for anyone with mobility issues, the opening to the observation platform from the top step requires a bit of a climb. I went up on a cold windy day and I’m not sure I would do it again!

There are two distinct advantages of an overnight stay in Rothenburg ob der Tauber (versus a day trip):

Before the dawn of the twentieth century, the citizens of Rothenburg placed their safety in the hands of the town’s night watchmen while they slept. Within the city walls, the town’s several night watchmen acted as the local police officers wandering the narrow alleys and keeping the peace.

The pay was low and the job considered a dishonorable one, only slightly above executioner and gravedigger on the moral scale. However, in a dangerous time it was an important role for the town.

The biggest danger in those days was fire and the night watchmen kept a vigilant watch for both fires and troublemakers. Six watchmen still patrolled the city streets each night up until the 1920’s.

Today, the Night Watchman’s tour allows visitors to make those nightly rounds and imagine what the town must have been like in the Middle Ages. From January – March, the Night Watchman meets his guests at 8pm every Saturday in the Market Square.

During the high season (March to December), tours run nightly in German (9:30pm) and English (8:00pm). The entire walking tour takes about an hour and payment of 8€ per adult is collected at the end (children under 12 are free). There is no need to book in advance.

They’ve been growing wine in the Tauber Valley for more than 900 years and vineyards interspersed between lovely villages dot the rolling hills surrounding Rothenburg ob der Tauber. The region is especially famous for their white wines served in a “Bocksbeutel” – the classic flat green Franconian bottle.

If you visit during the wine festival in August, the heart of the old town is transformed into a “wine village” with a variety of Franconian winemakers presenting their wines. Food tents and music make for a festive atmosphere.

Bakeries are in abundance throughout the town and it’s impossible to resist a taste of the most popular local specialty, Schneebälle. Colorful displays of this snowball-shaped treat occupy nearly every bakery window as you stroll around the old town.

Made from kind of a shortbread pastry, they come primarily in two sizes (grapefruit size or golf ball size) and in a wide variety of flavors from simple cinnamon and sugar to chocolate, strawberry or lemon.

I tried several flavors in search of a clear winner (I am nothing if not diligent when it comes to research of the dessert variety). Sadly, I personally found them a little dry and flavorless.

But they sure are pretty – and they make for an excellent photo op, even if they don’t become your new favorite snack. I suggest trying the small ones for sampling, the bigger size may be more of a commitment than you’re looking for.

If you’ve been in Germany long enough that you need a break from German food, try my favorite restaurant in town. Eiscafe-Pizzeria Roma was recommended by a military friend before our winter visit and it quickly became our new favorite in town.

They serve amazing pasta and the place was packed with locals on a winter Saturday night (always a good sign!). It’s located within the city walls at 19 Galgengasse.

If you’re a photog like me and always looking for the best shots in any given destination, here are my picks for Rothenburg’s best photo ops:

And there you have it! My soup to nuts guide to Rothenburg ob der Tauber Germany. I definitely recommend avoiding the plentiful group tours and driving yourself or taking the train. But if you can’t, there are a variety of day-trip tours available from Munich, Nuremberg, or Frankfurt:

A visit in the shoulder months of spring and fall, instead of the height of the summer tourist season, is also likely to provide a more enjoyable experience.

But no matter when you visit, this little German village is the stuff of fairy tale storybooks and well worth a stopover during your stay in Germany!

And if you’re looking for more great destinations in Germany, start here:

Lindau: The Most Charming German Island You’ve Never Heard Of