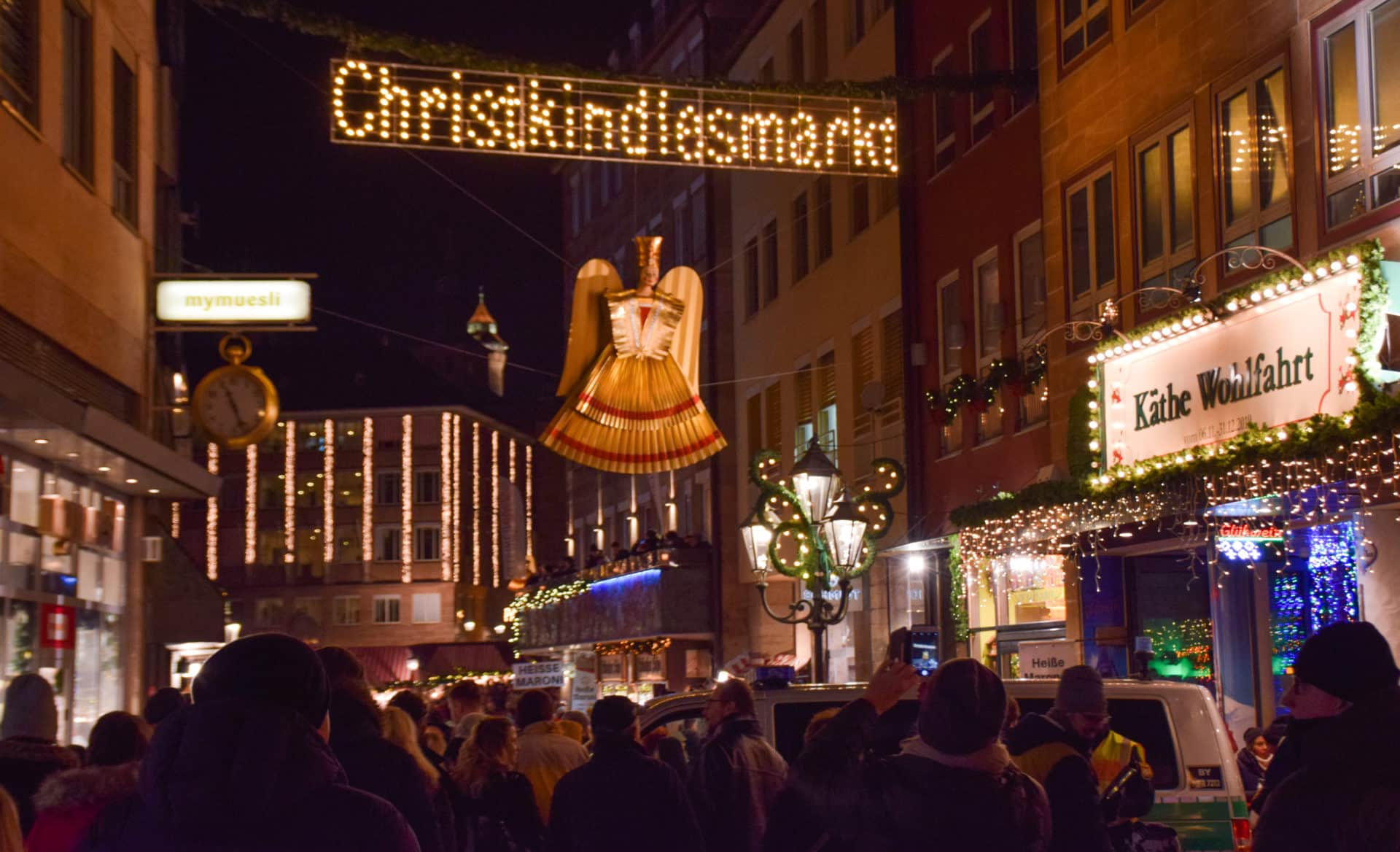 While there are hundreds of Christmas markets taking place in European cities large and small this month, there’s no better place to get the true holiday market experience than at one of Germany’s best Christmas markets.

And with a 400-year history, Bavaria’s 2nd largest city of Nuremberg hosts one of the best on the continent.

Dating back to the mid 16th century, Nuremberg’s annual Christkindlesmarkt is one of Germany’s oldest Christmas fairs. The Nuremberg Christkind is the symbol of the holiday market. Since 1969, an election process has chosen the young Nuremberg woman to fill the post. The Christkind has many responsibilities throughout the year, most notably opening the market each year on the Friday before the first Sunday of Advent.

How to Get There & Where to Stay

Whether by air, rail or road, Nuremberg is easily accessible from within Europe and around the world. From within Germany, the city’s central rail station can be reached from Munich by direct train in just over an hour, or from Frankfurt in as little as 2 hours.

And though the Christkindlesmarkt can be experienced in a day trip, it’s even more fun to spend a night or two and see it all!

For our recent weekend trip to Nuremberg, my husband and I chose the Le Meridien Grand Hotel Nuremberg for our stay. Conveniently located directly across the street from the central train station, the Le Meridien is also just a short stroll from the market festivities making it a great choice for market-goers.

Yes, some people visit Germany’s best Christmas markets to shop, but – truth be told – the holiday markets are all about the food and, especially, the Glühwein!

Nuremberg has a serious sausage legacy and the original “Nuremberger bratwurst” can only be produced within the city limits and must weigh in at exactly 23 grams. Bratwurst stalls emitting heavenly, smoky aromas abound throughout the market and are a great stop for a tasty treat.

Order up the traditional “drei im Weggla” (translated as “three in a bun“) – it’s the perfect grab and go snack to savor while wandering the myriad of candy-striped stalls.

Also well worth seeking out, the Raclette stand. This semi-hard Swiss cheese is heated up in the wheel and the melted goodness is then scraped directly onto a baguette. Pure cheesy heaven.

A German Christmas market essential, this traditional German mulled wine is basically holiday cheer in a mug. Served piping hot, the blueberry brew is blended with cinnamon and cloves to bring holiday warmth to shoppers even on the most frigid of market days.

Glühwein is available in a few varieties (including a non-alcoholic version for the kiddos) and is served from stands throughout the market in official Christkindlesmarkt mugs inscribed with the current market year. When you order a cup, you pay for the deposit on the mug as well, which you can refill as needed and keep as a souvenir. Or return it to get the deposit (called a pfand) back.

Side note: I didn’t like the 2019 mug as well as last year’s version, but luckily many stands have leftover mugs from previous years available for the same deposit fee. I choose to get another 2018 mug so I’d have a set but I was tempted by several of the older mugs dating back to the early 2000’s…you could easily start a collection if you wanted to!

For dessert, don’t miss your chance to try Nuremberg’s famous gingerbread, the Nuremberg Lebkuchen. Baked in the region for more than 600 years, these sweet and spicy treats are available in many shapes and sizes and are a market favorite with young and old.

Once you’ve been properly fed and watered, it’s time to shop! But what to buy? The options are seemingly endless. The products available are primarily holiday themed – ornaments, candles, holiday decor – but there are also numerous traditional and culinary items.

For something that truly says Nuremberg, look for the “Zwetschgenmannle” or “prune men” dolls. These beloved figures have been sold at the Christkindlesmarkt for decades and are made in more than 350 different styles representing various occupations or interests from chimney sweep to guitar player.

Walnuts are used for the head, dried prunes for the arms and legs and figs make up the body. Without a doubt, it’s one of the most unique souvenirs you can pick up at the market!

We chose to stick with a more traditional Christmas market souvenir, a beautiful hand-made angel ornament. But if you’re looking for something a little more memorable, keep an eye out for the seventeenth century “Rauschgoldengel” or gold rush angel dolls.

Symbolized by the golden angel that hangs over the southern entrance to the market (see photo above), these delicate dolls are hand-crafted from a paper-thin brass foil called Rauschgold. The angels come in a variety of sizes and can make a thoughtful gift or a new cherished family heirloom (or both!).

So why visit a German Christmas Market?

A Bucket List item for many around the world, visiting a German Christmas Market is the ultimate holiday experience.

The sights, smells, and tastes of Germany’s best Christmas markets are unsurpassed throughout Europe. Nearly every German city hosts a market for at least a few days, Rothenburg ob der Tauber is another favorite.

But when it comes to the total Christmas market experience, Nuremberg’s Christkindlesmarkt is the perfect place to enjoy the best Germany’s holiday season has to offer. It’s one of Germany’s most historic holiday events and the perfect family destination or romantic weekend getaway.

And if you’re looking for more great destinations in Germany, start here: