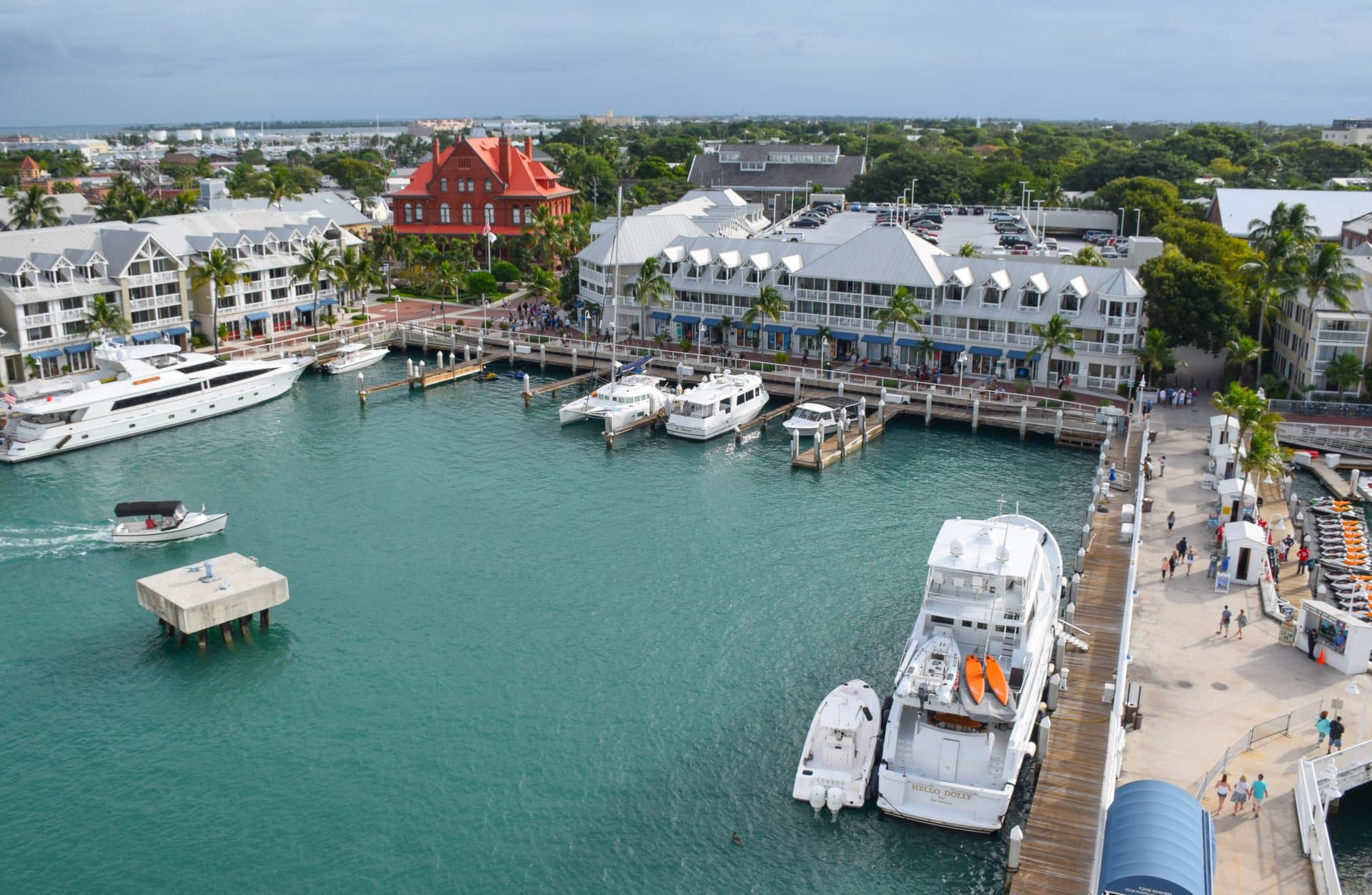 Inside: Key West is known for historic homes, lively nightlife, and friendly six-toed felines. Here are 5 must-sees if you just have one day to explore.

Just 90 miles from Cuba, the island of Key West is the southernmost point of the continental United States and the most populated island in the Florida Keys.

Once a base of operations against pirates, Key West later rose to fame as an enclave for artists and writers including Robert Frost, Winslow Homer, Tennessee Williams, and perhaps its most famous resident, Ernest Hemingway.

The Keys became linked with the mainland in 1912 with the completion of the short-lived Henry Flagler’s railroad which was abandoned after a hurricane in 1935.

The railroad was replaced a few years later with the 123-mile overseas highway that still stands today.

What is Key West best known for?

Nicknamed the “Conch Republic” since its tongue-in-cheek secession declaration in 1982, Key West is famous for postcard perfect beaches, a lively nightlife scene, and historic homes built in the traditional pastel conch-style architecture.

The island’s small size makes it easy to explore on foot, especially for those just passing through for a day on a cruise ship.

Of course, the Conch Republic’s relaxed charm and fascinating history are likely to have you wishing you could stay much longer. So, if you can spare a night or two, here are some of Key West’s best hotel options.

Where to stay in Key West

The Pier House Resort & Spa – Back in the ’70s this hotel was a favorite for visiting creative types. Today, this iconic waterfront hotel still retains its eclectic vibe. Some rooms are a bit dated (think excessive rattan) but the sunset views are a showstopper and you’re just a few steps from all the action on Duval Street.

Parrot Key Hotel & Villas – If you’re looking to escape the nightlife in downtown Key West and truly get away from it all, this beautifully renovated resort is a terrific choice. With 4 pools to choose from, you’ll never want for an empty lounge chair. Rooms have a crisp, spa-like feel and the lush grounds create a truly serene environment.

The Truman Hotel – This trendy boutique hotel is one of the best values in Key West. Especially on an island where most hotels run $500+/night and up. Rooms are bright and modern and the inner courtyard features a relaxing pool area. Just a short walk to Duval Street.

But whether you spend a few days or just a few hours on Key West, here are the best things to see and do.

Top 5 Things to Do in Key West

From iconic photo spots and six-toed cats to a quirky downtown scene and delicious desserts, Key West has it all. If you’re short on time, here are 5 things you absolutely can’t miss:

This colorful buoy marks the Southernmost Point in the United States, just 90 miles from Cuba. Nearby, there’s a plaque in memory of all the Cubans who have perished trying to reach America. Located at the intersection of Whitehead and South streets, a quick visit is a must.

Because it’s the most popular photo-op in Key West, the line for a photo tends to be long, especially on cruise ship days. Get there early to avoid the worst of the crowds. Access is free 24/7.

Built in 1851 in the Spanish colonial style, Ernest Hemingway wrote some of his greatest novels while living in this Key West home in the 1930’s and 40’s.

Today, the Hemingway House is a Registered National Historic Landmark and still contains his study, furnishings, and other items collected by Hemingway and his wife, Pauline, in their travels to Spain, Africa, and Cuba.

But the home is perhaps best known as the habitat to dozens of six-toed cats, the descendants of the author’s white six-toed cat given to him by a ship’s captain.

More than 40 cats still roam the estate today and approximately half exhibit the six-toed trait, though all carry the gene in their DNA.

Due to the estate’s large number of visitors, the cats are friendly and outgoing and likely to come right up and say hello when you arrive (as the one in the photo below is doing to me!).

A stop by the Hemingway home is a must for any visitor to Key West.

Across the street from the Hemingway House, you’ll find the Key West Lighthouse and Keeper’s Quarters Museum. Built in 1848, the lighthouse helped safely guide both military and commercial vessels through the reef-laden waters off the Florda Keys.

The lighthouse’s original Keeper was actually a woman, a true rarity in the 19th century. By 1969, technological advances replaced the need for a full-time Keeper and the U.S. Coast Guard decommissioned the lighthouse.

Today, visitors can climb the cramped 88 steps to enjoy the best views in Key West (if you’re claustrophobic, you might want to give this one a pass!). Don’t miss the Keeper’s quarters which is now a lovely museum displaying photographs, words and belongings of Keepers throughout the lighthouse’s history.

Tickets & Hours: One ticket allows access to both the lighthouse and the museum. Adult tickets are $17 and kids 7 and over are $8. Tickets are slightly cheaper if purchased online in advance directly on the Key West Art & Historical Society website. Open daily 10:00am – 4:00pm.

OK, like the Southernmost Point, there’s not much to see or do here. But it’s another great photo-op and a must-see spot in Key West.

The Mile Marker “0” sign marks the beginning of US Route 1 which stretches all the way up the east coast ending in Maine. Don’t blink or you’ll miss it.

Downtown Key West is well-known for a vibrant nightlife scene and no trip here would be complete without a stroll along lively Duval Street. Lined with shops, bars and restaurants, Duval Street runs for a mile from north to south connecting the Gulf of Mexico with the Atlantic Ocean.

Opened in 1933, Sloppy Joe’s Bar is ground zero for the party scene. But you’ll find plenty of options to pop in for a frosty concoction along the six-block historic district area.

You’ll find Key Lime pie everywhere in Key West, it’s the signature dessert of the Florida Keys. But if you’re on the hunt for the best place to try this tangy treat, head to one of these:

And that’s a wrap!

Key West is a truly great place to visit whether you have just one day or a whole week to explore. If you have several days, be sure to hit the water for a snorkeling trip or a sunset cruise.

But if time is short, the five sights listed above make for a perfect walking tour and a terrific day of exploration on island time.

And if you’re looking for more incredible destinations in the United States, start here:

The Beginner’s Guide to Whale Watching in Maui Hawaii

5 Awe-Inspiring Things to Do in Colorado Springs (3 are free!)