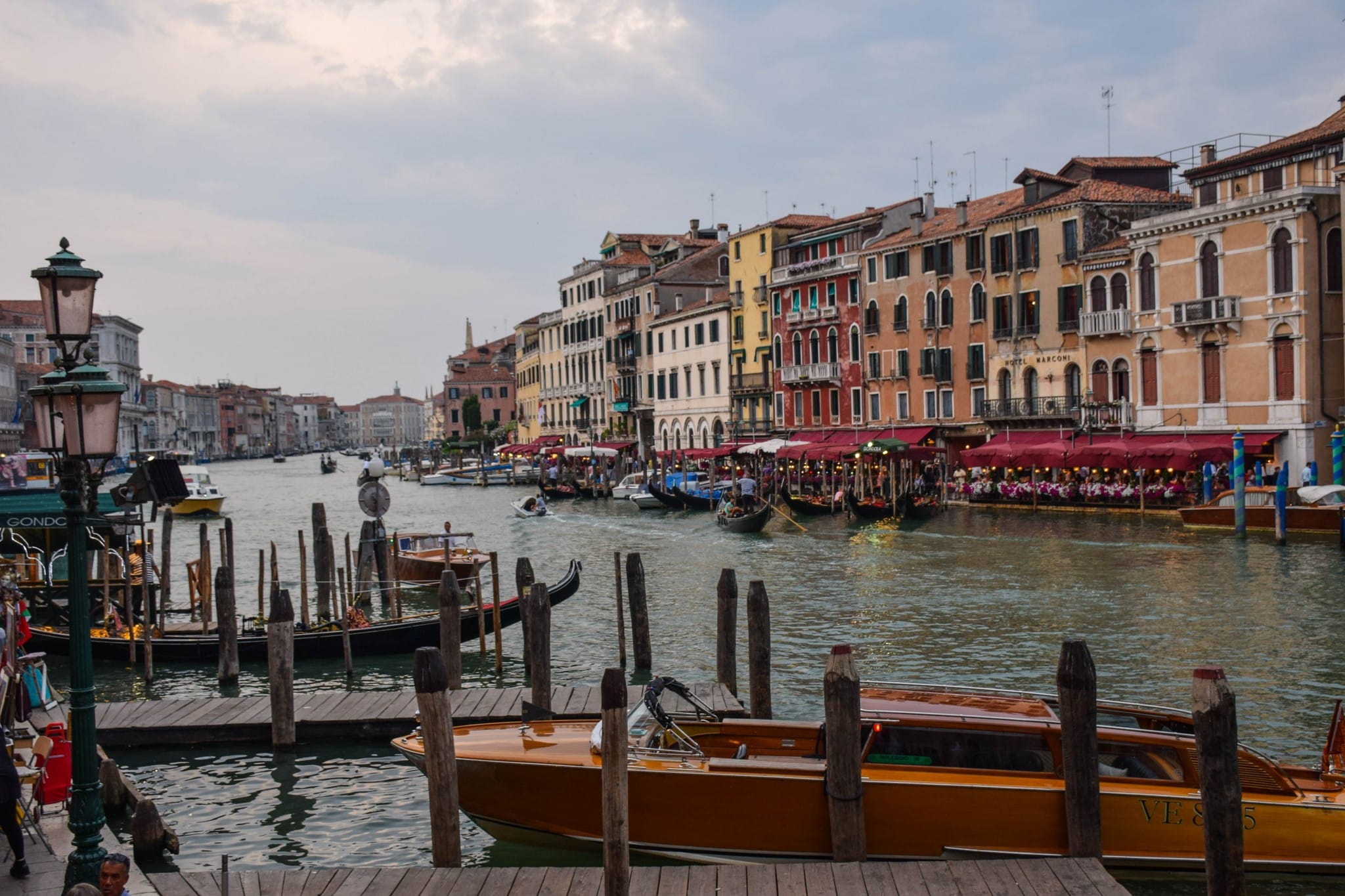 The day before our departure from Cinque Terre we had carefully checked the train schedules and decided on our route to Venice. Unfortunately, when we arrived at the small station in Riomaggiore in time for our 9:40am train to La Spezia, we discovered that it had been canceled due to a rail strike (the second one that week).

The next train didn’t leave for an hour and as we researched our connection options things were beginning to look bleak. Our original train had us arriving in Venice by 4pm. Our new options meant not arriving until at least 7pm, and that was if we made all of our connections with no delays (unlikely from what we’d seen so far).

When we finally arrived on the next train at the larger station of La Spezia, we stood in a ridiculously long line to speak to someone at a ticket window to see what our options were. The station was an absolute zoo thanks to the number of train cancelations and delays. Forty-five minutes later, the best option they could provide was a train with just an 8 minute connection in Parma and I was just sure we would miss that and be stuck there for hours.

Determined to find a better alternative and leave the chaos of the train station behind, I started researching car rental options on my phone. They looked promising so we took a taxi to the local Europcar rental office and promptly struck out, they were out of cars. Luckily there was a Hertz office just down the street and they had one car left so we jumped at it.

The drive took approximately 3 ½ hours through beautiful countryside and by 4:00pm we had arrived at our hotel, the Doubletree Venice North, about 15 minutes north of the city.

The fact that we’d booked a cheaper hotel outside of Venice turned out to be an advantage since they also had free parking. I was worried that it might be a challenge to have a car in an island city like Venice but I shouldn’t have worried. The roads were easy to navigate and thanks to a tip from the concierge, we found ample parking on the island near the train station. Due to the somewhat remote location of our hotel, having a car actually turned out to be a huge plus.

Founded in the 5th century, Venice is undoubtedly one of the world’s most unique cities. Comprised of 118 islands set in a marshy lagoon, the city once thrived as a great maritime power and is today considered an architectural treasure thanks to its abundance of vast marble palaces set along a labyrinth of canals.

The most famous of these canals is the aptly-named Grand Canal which functions as the city’s super highway and is packed day and night with water ferries, taxis, gondolas and speedboats.

After checking in to the hotel, we hopped back in the car and headed into the city to explore a little and find dinner. We’ve all seen pictures of Venice but I realized immediately that every photo I’d ever seen of Venice Italy paled in comparison to the watery wonderland before my eyes. Pictures just do not do justice to this remarkable city. I’ve never seen anything quite like it and I was in love from the start.

We wandered the narrow alleyways following the curve of the Grand Canal in search of Piazza San Marco, or St. Mark’s Square. While the Grand Canal is just as spectacular as the name implies, for me it was the back canals that were the heart of the city. We crossed tiny bridges spanning quiet, narrow water lanes with only the occasional gondola gliding by. It was heavenly.

Eventually we made it to the Piazza San Marco just as the sun began to set and we stared up in amazement at St. Mark’s Basilica and the iconic rose-colored bell tower. After a stroll through the sea of pigeons the square is famous for, we headed back toward the Rialto Bridge and found a great spot for dinner with a Grand Canal view.

It was a perfect introduction to Venice and we couldn’t wait to return the next day to see more.

You have to do it, right?

I mean you can’t come to Venice (certainly not on your honeymoon) and not take a gondola ride.  So, of course, that was at the top of our list for Day 2 in Venice. I’d heard for years that gondola rides in Venice were very expensive so I was slightly concerned about how much it might cost to check this little adventure off our bucket list but it wasn’t too bad.

Thorough research revealed that gondolas operate on fixed prices – 80 euro for the basic gondola experience, higher at night – so there was no need to haggle or worry that you’d paid too much.

We’d gotten a bit later start that morning after returning the car so with a 5pm flight to Athens looming, a gondola ride was about all we had time for. We chose a gondolier near St. Mark’s Square (though you can find one just about anywhere) and headed into the Grand Canal for our 45-minute tour of Venice by gondola.

Often in my travels I’ve been disappointed to discover that the some of the most popular sights or activities don’t live up to all the hype. I’m happy to report that was not the case with the gondola ride! Though I admit much of this review may have been because it was quite a romantic experience to share with my husband. If I’d done the ride as I’ve done so many things in my life – on my own – I can’t say for sure if it would have held quite the same appeal.

But I must say, Dave and I just loved it. As our gondolier pointed out the Bridge of Sighs before we passed under it, I reminded Dave that tradition dictated that you were supposed to kiss under all the bridges (as if we needed an excuse). This, of course, brings an extra amount of fun to the ride. It was 45 minutes of total honeymoon romance and worth every euro in our opinion.

With our gondola ride complete, it was time to catch the ferry to the airport and move on to the next stop on our honeymoon tour, Greece. It’s been an incredible two weeks in Italy and I will always cherish the fact that we got married here, there is possibly no more romantic place in the world.

But for now, we must move on…next stop, Athens!